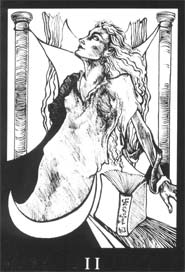 The Book of Kaos Tarot is a compelling self-published 80-card deck. The imagery uses pagan and tribal imagery and its pen-and-ink art varies from simple to complex across the cards.


Card Images from the Book of Kaos Tarot 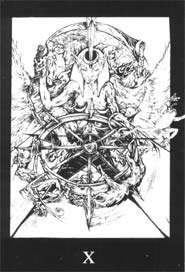 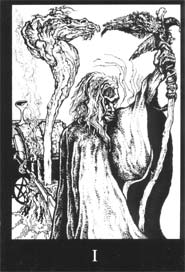 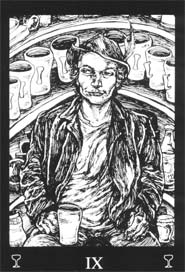 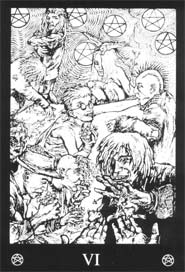 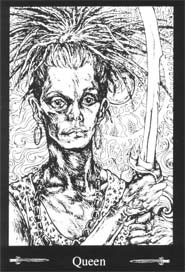 The Book of Kaos Tarot is a self-published 80-card Tarot created by Australian artist Orryelle Defenestrate-Bascule. The deck was first released in 1991 as the Bohemian Tarot, but for this edition almost half of the major arcana have been updated to form the deck into an “inter-sect-ion of Chaos Magick and the double aeonic current of Horus and Maat”.

The suits are Staves, Cups, Swords and Pentacles, while the court cards are Page, Knight, Queen and King. There are actually 24 major arcana cards, as there are two differing Lovers cards, and two Devil cards, one with Pan and one with Baphomet. Some titles of the Majors have been altered to a more Thoth-like titling:


All cards are black and white only, with card scenes of pen-and-ink with some full bleeds of glossy black, surrounded by black borders. The quality of the artwork varies across the cards, as Orryelle explains in the booklet - because they were made across a span of years and revisions. The imagery has tribal and pagan elements and also ranges “from the basic and direct to the obscure and complex” - which the artist compares to life - but all cards have Tarot symbolism at their foundation.

Visually the cards range from wild and chaotic (Three of Pentacles, Three of Swords), to simple (Ace of Wands, the Moon), to myth and fantasy (The Hanged Man, Nine of Pentacles, Six of Wands) or tribal (Queen of Swords). Some illustrations are such complex arrays of lines that until studied, it’s hard to tell what the scene is: I don’t know where to look in the Six of Pentacles or the Hanged Man. Then, along with the busy and complicated, there is the stark and spare, such as the Hermit, or Death. The former card is almost totally black, but for the torso and head and scythe of a distant Hermit, filling such a tiny part of the card. Death is a skeleton, a skull and vertebrae that gradually change into butterflies the lower down the spinal cord.

My favourite cards included The Fool as a ragged violinist, booted and long-haired, playing as he steps off the cliff, snake at his heels. The High Priestess: the shading is clever and she gazes off into the sky, looking at something we can’t see. The Empress, a pregnant woman, crowned with flowers, around her are ears of mature corn: ”The Empress blossoms with fertility, pregnant with potential, ever about to birth another new form into the world.” And the Ten of Wands, where a man struggles under the weight of his own dreadlocks – an unusual interpretation! - and the Page of Pentacles, who actually has glasses and looks studious. The Ten of Cups is interesting -- full of people, eyes watching, some of them seemingly envious rather than pleased.

In the hand, the cards are roughly 9.5 by 14cm – at the limits of what I can shuffle - and have rectangular, not rounded corners. The backs of the cards are white with a black design of the Fool and an eight-pointed cross. The cards are packaged in a thin cardboard slipcase the same size of the cards, along with a photocopied companion booklet. The LWB is written in a complex style and holds a description of the card image and magickal and gematrical associations, and the place of each card in the Fool’s Journey. An example section, for the Magician:

ATU I – The Magician

The fool now (presumably after a possibly painful fall) decides to take Fate Into his own hands, wielding the elements (Fire, Air, Water and Earth) as Magickal Tools – the Staff Cup, Sword and Pentacle (these are the gateways to the minor arcana elemental suites) – attempting to manipulate the Universe through active (phallic) assertion of his Will. He has taken the kundalini serpent(/s) and bound them around his caduceus Staff – consciously wielding the kundalini or shakti power, the ida and pingala/od and ob winding up his spine/sushumna nadi as exteriorised on the wand.

This is the flipside of The Fool – he is in control rather than surrendering to the tao of Fate – or so it would seem; but the Magician soon discovers that he may only succeed in asserting his Will if is TRUE Will – that is, Will in accord with the flow of tao, as discovered by the magical operation of communion with the Holy Guardian Angel or divine/future(wode-)self.

The Magician conjures a draconian apparition – is it visible to others or only to his magical perception?

Creative Power. Control; assertion of Will.

The Book of Kaos Tarot is a compelling deck with a strong esoteric basis, and cards are suitable for everyday as well as deeper magickal or spiritual readings.