Also known as So Below Deck

This Book of Shadows Tarot is the second deck in the unique two volume Book of Shadows kit. This is the 'So Below' deck, concentrating on the magical energies that surround us in everyday life.


Card Images from the Book of Shadows Tarot: Volume 2 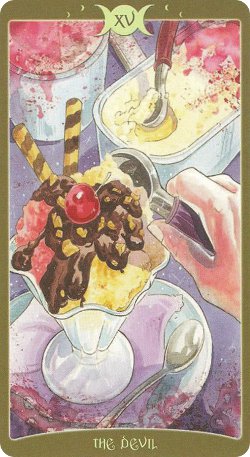 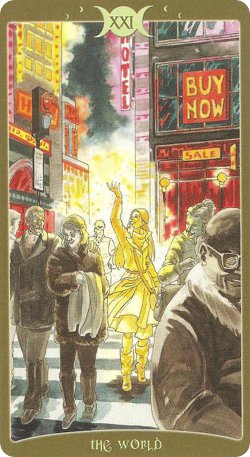 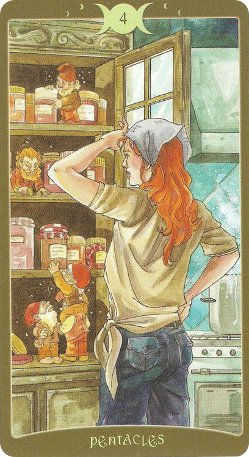 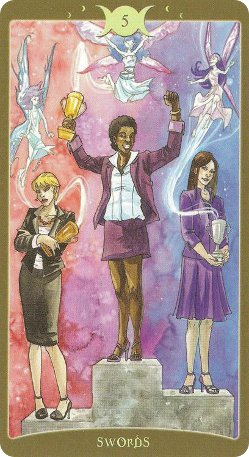 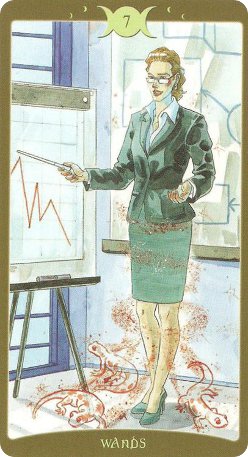 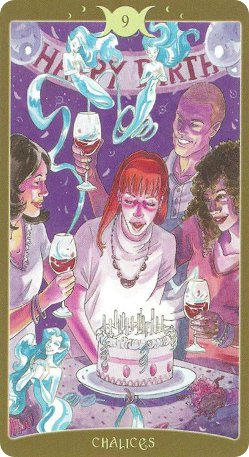 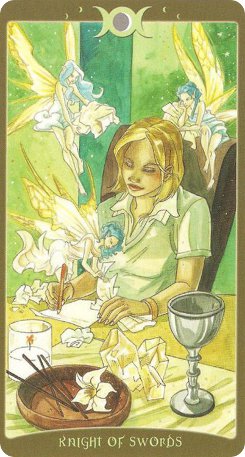 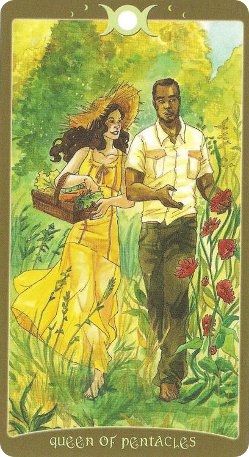 The Book of Shadows Tarot: Volume 2 aims to be a loose-leaf version of a witch's journal – full of lessons learned and esoteric wisdom. It shows Wiccans practicing magick in their daily lives.

This is a deck full of vivid colours, it is conspicuously youthful, and multiracial The deck depicts thoroughly modern life, and does not shy away from including contemporary technology in it's scenes. There is a pre-dominance of female figures, but men are not left out entirely.The artwork is very reminiscent of illustrations in graphic novels and seems slightly cartoonish, conveying a great deal of facial expression and physical movement.

This is a 78 card deck, with 22 Major Arcana and 56 Minor Arcana. The images are wholly original and do not refer to any classic tarot decks, however the artwork conveys the essence of classic Rider Waite Smith divinatory meanings. Most of the images are self-explanatory but some are a little unusual i.e. The Emperor is shown as a business-woman, and The Devil as a giant ice cream sundae. The atmosphere projected by the Major Arcana is generally positive and joyful. - families play together, people enjoy walking, jogging, yoga, dining together, a relaxing bath - the minutiae of daily life.

The four suits of the Minor Arcana are Cups, Pentacles, Swords, and Wands. Elemental beings relevant to each suit appear in the numbered cards; water sprites in Cups, gnomes in Pentacles, salamanders in Wands, and fairies or sylphs in Swords. These Elementals are shown assisting the people in the cards – they accompany them on adventures, they share joy, and offer comfort, help, and advice. Unusually not an actual sword or pentacle is to be seen in their respective suits, yet the meaning of the cards are ably conveyed by the imaginative scenes.

The Court cards show the progress of individuals - from a teenager with an interest as a Knave, through apprenticeship as a Knight, becoming an adept as a Queen, and a master as King. The royal titles are really used an indicator of achievement rather than gender as there are male Queens (cups, pentacles) and female Kings (wands, swords)

The Little White Book, written by tarot expert Barbara Moore, includes information in five languages – English, Italian, Spanish, French, and German. This LWB is the very essence of brevity - there is no description of the tarot images so it is up to the reader to interpret them. While most of the scenes are self-explanatory some would benefit from some exposition as to what is happening. There is a Divinatory Meaning and a Reversed Meaning given for each card, both of which are concise with no surprises in the interpretations. There is a suitably named “Almost All-purpose Spread", it is the only one included in the LWB, but these cards could function well in virtually any layout.

The cards measure 66 x 120 mm, which is an average size for a Lo Scarabeo deck. The card stock is good, thin and flexible, but it will not bounce back from being bent. The cards are low sheen and shuffle well without being slippery. The print is clean with clear bright colours. Each image has a narrow border in olive green with the number at the top of the card framed in a pale green triple moon symbol. The titles of the cards are printed in pale green at the bottom (including the curiously spelled Hyerophant). The print on the back – two triple moons – is fully reversible. The cards come in a glossy close-fitting cardboard box – easily transported but will not stand up to prolonged rough handling.

While the first deck in this two-deck volume, the Book of Shadows: As Above Tarot, showed Wiccan belief and interactions in the mystical realm - between the worlds – this second deck shows how magic functions in Wiccan daily lives. Some of the depictions of Elementals in the Minor Arcana are perhaps a little reminiscent of Disney animations – which is regrettable. This deck could have been just as powerful without such cutesiness.

The Major Arcana however is engaging, original, and maintains its integrity. In spite of a few shortcomings this deck is bursting with verve and positive attitude. It is bright, clever and worth taking the time to get to know. It grows on you. Overall this is a versatile tarot that will be of interest to Wiccans and Pagans, but can also be easily used and understood by any interested reader.