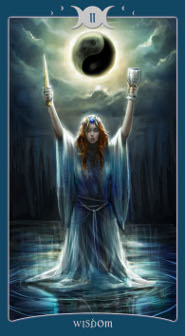 Also known as As Above Deck

The Book of Shadows Tarot is the first volume in a two volume deck set conceptualised by tarot expert, Barbara Moore. This is the 'as above' deck, focusing on universal and divine energies, while the second will be 'so below' and concentrate on everyday human experiences.


Card Images from the Book of Shadows Tarot 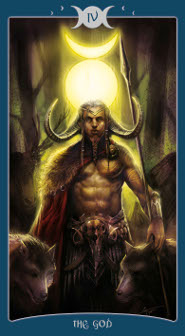 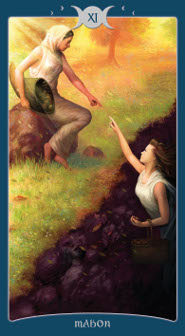 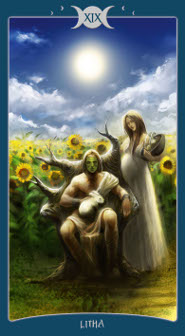 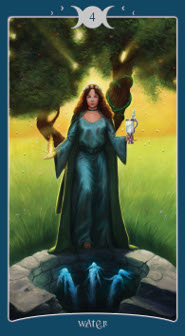 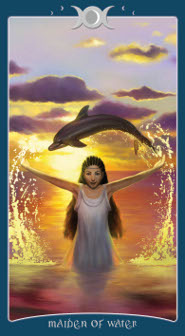 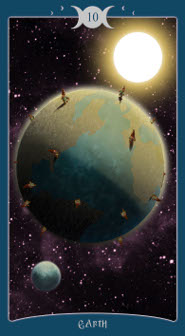 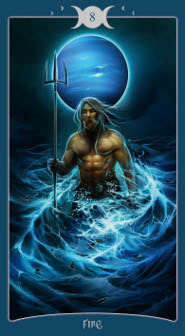 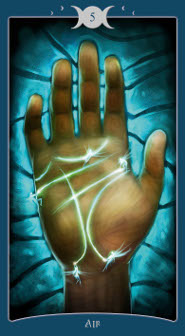 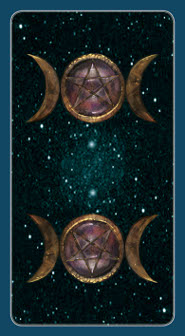 Lo Scarabeo have finally issued an apology for their awful Elemental Tarot (reviewed by myself when it was published two years ago) in the form of this, the Book of Shadows Tarot.

And what an apology! A Wiccan deck with delightful, sensual imagery, exquisitely detailed and rendered in vibrant colours. This could surely become any self-respecting witch’s favourite familiar.

What does this deck have to do with the Elemental Tarot? Simply this - both decks use the four elementals to illustrate the meanings of the minor arcana.

On the subject of the minor arcana – I have often despaired when presented with decks where the images on the minor cards exhibit meanings which deviate greatly from the traditionally accepted interpretations. It is vexing at best! (I define traditional as originating from the Rider-Waite / Crowley / Golden Dawn tarots).

Isn’t it more fun to break the rules if we know what the rules are in the first place?

This deck has departed completely from the traditional meanings of the minor arcana – but it’s so well done that it truly doesn’t matter.

For example, the suit of fire (traditionally wands) illustrates the planets – from Ace to Ten: the Sun, Mercury, Venus, Mars, Jupiter, Saturn, Uranus, Neptune, Pluto, the Stars. The LWB states ‘This suit traditionally associated with Wands and represented by the Salamanders depicts the astrological and cosmological aspects of the universe’.

Phew! Quite a task.

All the planets are represented by male Gods, excepting Venus of course. The Moon is not included – possibly because the Moon appears in the Major arcana anyway? But then, the Star and the Sun appear in the majors.

As tarotists know very well, trying to make various systems (astrology, tarot, I Ching, runes, etc) fit within the context of the Tarot is almost impossible. At the end of the day, minor ‘imperfections’ are both inevitable and irrelevant.

The suit of Air: ‘The suit traditionally associated with Swords and represented by the Sylphs depicts all the aspects of divining and interpretation of reality. Among these, obviously, there is obviously the Tarot’.

The numbered cards are, from Ace to Ten: Dreams, the Pendulum, Scrying, Omens, Palmistry, the Attendant, I Ching, Meditation, the Runes, the Tarot.

The concept of illustrating various forms of communicating with the spirit world works perfectly within the realm of this suit.

The suit of Water: ‘The suit traditionally associated with Cups and represented by Nixies depicts the features and the faces of the Goddess’.

This choice is perfect. The suit of Cups / Water traditionally deals with various aspects of Love – in its purest and most impure forms. All of them are direct conduits to the Goddess.

From Ace to Ten: the Chalice and the Athame, Aphrodite (and Eros), Flora and Fertility, Bridget (Healing), Bellons (War), Sarasvati (Wisdom and Culture), Ma’at (Justice), Cerridwen (and Taliesan), Lakshmi, Hecate.

The cards within this suit bear images that convey the traditional interpretations of the cards much more closely than any of the other three minor suits.

The suit of Earth: ‘The suit traditionally associated with Pentacles and represented by Gnomes depicts the magic of the natural world and of our planet’.

The Court Cards – for all four suits, the four cards are represented as follows: the Knave (traditionally Page or Princess) is represented by the elemental of the suit. The Knight, Queen and King are renamed Maiden, Mother and Crone respectively. These archetypes represent, in Wiccan tradition, the three phases of a woman’s life – before childbirth, after childbirth, and post-menopause.

These phases are also symbolised by the Triple Goddess symbol, illustrated on the card backs (new, full and old moon) with a pentacle inscribed within the full moon. (The cards are reversible).

And finally... the major arcana. A treasure trove.

All the cards have been re-named – however they all retain their original meaning. They have simply been interpreted from a Wiccan perspective.

The Fool is ‘the Summerlands’ (cynics will think of Lord Summer Isle’ from the ‘Wicca Man’ movie from 1973, starring Christopher Lee).

The Magician is ‘the Elements’ – a hand appears from each of the four corners, each holding a cup, a sword, a wand and a pentacle.

The Priestess is ‘Wisdom’ – under a solar eclipse, she holds aloft an athame and a chalice. Her dress flows naturally into the water surrounding her.

The Empress is ‘the Goddess’. I would love to have seen a Dragon within this image, but I’m not really too disappointed. One of the Goddess’s totem animals takes centre stage (a hare), above which two women gaze at the viewer, holding a tray full of apples (another symbol of the Goddess – a reference to the pentacle that appears in the centre of an apple when cut in half).

The Emperor is ‘the God’ – Pan Himself. Not sure I’m particularly smitten with the way his horns appear to grow behind his ears, downwards then upwards like a buffalo - but my personal feeling aside, it is of course wonderful to see Him. (I prefer the traditional goatly image. Pan is half goat, not half buffalo!). In this setting, he is accompanied by two wolves.

The Pope is ‘the Book of Shadows’. I believe the Goddess / Dragon Herself has chosen to appear within this image, whether or not this was a conscious decision by the artists is not clear. (The tail of a Dragon emerges from the centre of the open book). I’d like to believe that Gaia’s unseen hand guided the design of this image.

The Lovers is ‘Beltane’ – a perfect time for the Blessed Union of two hearts. The lovers appear in the clouds above a beribboned Maypole, around which celebrants with floral headdresses dance, the Maypole’s ribbons in their hands.

The Chariot is ‘Transformation’. This title is often used to entitle Arcanum XIII (Death). Cynics would see it as a way of softening or sweetening the card’s meaning, others would see it as a more direct, authentic interpretation of it. Either way, it is interesting to find this word on the Chariot.

Strength is ‘Spellcasting’ – the LWB: ‘Mastering yourself, managing resources, creating change, working in harmony with the Divine’. Reversed meaning: ‘Being controlled by impulses, blaming others for your own mistakes’. The image is of a woman in a circle of fire. (These words bring to mind Kate Bush’s Wiccan song ‘Lily’ from ‘the Red Shoes’ CD).

The Hermit is ‘the Path’. A dreamlike image – a man walks fearlessly into the unknown, in a forest under a canopy of twisted branches. There is no green in this wood – just simple blues and black, adding to the eeriness of the scene. An owl, perching on a branch, gazes at him.

The Wheel of Fortune is ‘the Wheel of the Year’. A wheel dominates the image, upon which rests leaves and bunches of grapes. The zodiac is on the outer wheel. Within the inner circle are symbols of the eight fire festivals, appropriately placed by the corresponding zodiacal sign. Within this is a third circle, divided into quarters, showing the four stages a tree passes through (barren for winter, blossom for spring, verdant for summer, reds and yellows for autumn).

The mid-way point of the major arcana is illustrated perfectly. Justice has become ‘Mabon’ – the Autumn Equinox – when the hours of sunlight begin to shorten and Samhain isn’t far away. The image is divided in half diagonally, the top section occupied by a woman in a sumptuous summer scene, sitting atop a rock, holding a cornucopia symbolising summer’s harvest. The section below her is occupied by a woman in darkness. They reach out to each other, almost touching.

The Hanged Man is ‘the Circle’. At first glance, the image could easily be mistaken for what many might consider to be an appropriate image for the Magician. An old man stands in the middle of stone circle, arms held upwards in veneration. He is inviting the spirit world to be with him. And indeed, they appear – four ghostly apparitions of the four elementals themselves. The LWB: ‘creating a sacred, clean and safe environment, setting boundaries, focusing exclusively on the spirit world for a time.’ Reversed meaning: ‘Playing the role of a martyr, feeling helpless’.

At this point I think it is appropriate to leave the translation of the remaining major arcana to my dear readers. I hope I have done this deck justice in my appraisal of it. It is a remarkable piece of work, warmly recommended.