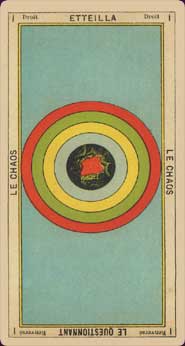 The Book of Thoth Etteilla Tarot is a reproduction of a nineteenth century tarot deck based on the deck created by Etteilla, who was the first to create a deck solely for divinatory use.


Card Images from the Book of Thoth Etteilla Tarot 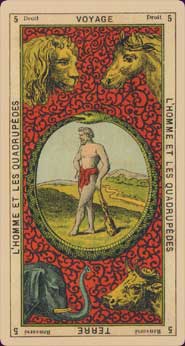 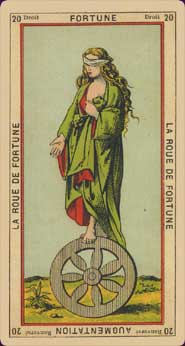 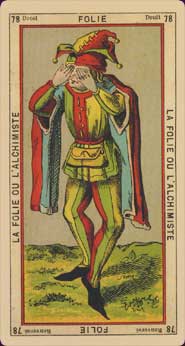 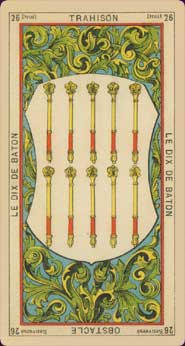 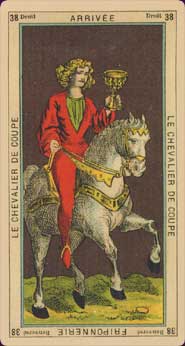 Jean Francois Alliette, better known to us by his pseudonym Etteilla, was an important figure in the development of modern Tarot. In the late eighteenth century, he published the first known book focusing on the use Tarot for divinatory purposes and created the first set of Tarot cards specifically for occult and divinatory use.

Few cards remain today from Etteilla's original deck, but it served as a template for later versions created by his students. One of these, published in 1870 as 'Grand Jeu de Oracle des Dames' - Great Game of the Oracle of Ladies and known to academics as 'Grande Etteilla III', has been reproduced by Lo Scarabeo as the Book of Thoth Etteilla Tarot.

While based on Etteilla's cards and concepts, the 1870 deck differs somewhat from the original cards. It has medieval-styled images, and modifications were made to the imagery of some majors, but the titles and keywords remained unchanged. As it is a reproduction rather than a re-creation, the art of these cards looks old and age-toned in hue.

A deck of 78 cards with 22 majors and four suits of 14 cards each, the cards are numbered from 1 to 78 with the title appearing on the left and right hand borders. The top and bottom of the card bear upright and reversed keywords. (While I speak little French, English has borrowed enough words from it that I can generally understand the meaning of the keywords on these cards.)

Translated from French, the major arcana cards (also referred to as the superior 'Lames' in the booklet) are:

Some of the major cards are recognisable as tarot archetypes, but more are greatly changed or wholly unfamiliar. Most easily recognisable is Justice (a woman with sword and scales), while at the other end of the spectrum is Bird & Fishes (which depicts just what it sounds like), Chaos and the Heavens, both of which have multi-coloured circular designs. The minor arcana (inferior Lames) are pip cards in suits of Batons, Cups, Swords and Coins, and the court cards (median Lames) are fully illustrated.

While Etteilla might have erroneously attributed the origins of Tarot to the Magi or Ancient Egyptian (hence the 'Book of Thoth' title) his deck was an important milestone in the development of Tarot as we know it. This is an interesting Tarot, ideal for the student of historical tarot, and for the collector of pre-Waite Tarot decks.

The Book of Thoth Etteilla deck is a marvelous Lo Scarabeo reproduction of Grand Jeu de l'Oracle des Dames, a deck which dates back to the 19th century. I've been planning to buy this deck for a while, and I wasn't disappointed when I finally got it. It makes a wonderful collector's item for those interested in the history of Tarot, but it's so much more than that.

The structure of the deck is essentially traditional: there are 22 Major Arcana (called 'Superior Lames' in the booklet) and 56 Minor Arcana, divided into four suits of Batons (Wands), Coupes (Cups), Epees (Swords), and Deniers (Coins), with the Court cards ('Median Lames') called Valet (Page), Chevalier (Knight), Reine (Queen), and Roi (King). The numbered cards ('Inferior Lames') go from Ace to Ten, and are non-scenic, which means that instead of a unique image for each card depicting a certain scene, they only have the respective number of suit symbols on them.

What makes this deck truly unique is the Major Arcana. They are different from the traditional ones, and while some of the Majors remind those of classical Tarot decks, others have only vague or no resemblance to more usual trumps. The first eight cards loosely represent the story of the Creation (Chaos, Light, Plants, Heavens, Human and Animals, Stars, Birds and Fishes, Rest), the next four cards are the medieval cardinal virtues as described by Plato (Justice, Temperance, Strength, Prudence), and the remaining nine cards show everyday events and troubles (Marriage or High Priest, Force Majeure or Devil, Illness or Magician, Trial or Judgment, Death, Treason or Hermit, Poverty or Temple Struck by the Lightning, Wealth or Wheel of Fortune, Quarrel or The African Despot). Fool is numbered 78, and represents madness. The Trump 1 (Chaos) is traditionally used to represent a male querent, while the Trump 8 (Rest) represents a female querent.

The cards are numbered from 1 to 78 throughout the deck, and have their names printed on the sides, as well as divinatory meanings on the top and bottom of each card, for the upright and reversed position respectively. The back of the cards has simple tiles of a mute color in a repetitive and completely reversible pattern, reminiscent of backs of usual playing cards.

The deck comes with a booklet, which covers basic history behind the deck, gives brief explanations of the upright and reversed card meanings, and the description of a ten-card spread called 'The Leap of Heqt'.

The Book of Thoth is certainly not a beginner's deck, and it poses a number of challenges even to an advanced reader. The names and keywords on the cards are in French, which definitely adds to the charm and authentic feel of the deck, but might be a problem for those who don't know the language. The unique system of Major Arcana and non-scenic Minor Arcana offer some difficulties with memorizing and interpreting the cards.

However, these challenges are well worth working through. The art of the deck is very soft and pleasant to look at, with bright and rich colors, beautifully vintage-looking, and not overloaded with symbolism. What's more, the deck gives incredibly clear and to-the-point readings, especially on everyday matters. The keywords printed on the cards can be used in readings by themselves or along with the system adopted by a concrete reader - I've found that merging both ways adds another layer of meanings to the cards and makes readings more profound. The non-scenic numbered cards offer a great way to develop the reader's intuition and will be familiar to the readers working with Marseilles-type decks.

In my opinion, the Book of Thoth Etteilla is a must-have for serious Tarot collectors, for those readers who enjoy old-fashioned divination and oracle cards, and for those who would like to stretch their Tarot knowledge and skill a little further. Being revolutionary - and highly popular - in its own time, this deck has everything to become one of any reader's most favorite and used decks.