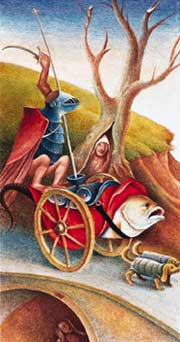 Strikingly vibrant, the Bosch Tarot deck depicts humans, monsters, and visions as Tarot cards. The art style is modelled on that of Dutch artist Hieronymous Bosch and has elements from his paintings. Fascinating.


Card Images from the Bosch Tarots 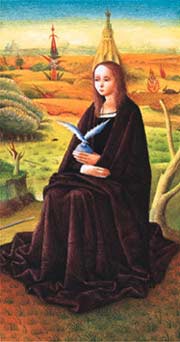 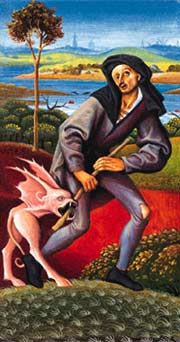 The "Bosch Tarot", a stunning art deck, is based on the work of 15th century artist Hieronymous Bosch. The artwork comes across as a combination of surrealistic and whimsical, reflecting a mixture of reality, animism and monsters. The longer you look at it, though, the scarier it gets! This makes sense when you realize that Bosch was well known for his dark way of looking at life, and his ability to make the dark sides even darker by placing them together with the real world.

The coloring is in predominate shades of yellows, oranges, light greens and blue-grays. The style appears to be line drawing in colored pencil. One of the things that I like about this deck is its attention to detail. Lacking knowledge in art history, I did have to do some research on Bosch. Atanassov has certainly drawn his inspiration from Bosch's work, including a work that I had heard reference to, but never seen before - "The Garden of Earthly Delights". Actually, I did the research before I looked at the deck, so "finding things" was a great deal of fun!

The LWB (Little White Book) is not a book, per se, but the pamphlet that traditionally comes with each deck. It is formatted in the accordion style, not my favorite by far. A short background on the history of Tarot is given, with an equally short explanation on how to read the cards. The spread that is presented is a five card spread called The Shadow. It attempts to show the hidden consequences of the Querent's attitude towards the question/issue at hand.

No scans are used, and there is a short explanation given for each card, along with one keyword. The Major Arcana retain their traditional titles, with Justice in position VIII and Strength in position XI.

The Minor Arcana suits are Wands, Chalices, Swords and Pentacles. The Court Cards are entitled Knave, Knight, Queen and King.

The cards themselves are approximately 2 1/2" by 4 3/4", on quality, glossy, coated card stock. The backs show six rows of three cards each, done in black and white. The bottom two rows are the same as the top two rows, only reversed, so that it would not be possible to tell if a card had been drawn in the upright or the reversed position. The Major Arcana show a black border on the card face, with the card number in Roman Numerals (in yellow) on the top, along with the card title (in white text) in English, French, German and Spanish, with the title in Italian (in yellow text) along the bottom of the card.

There are interesting aspects to literally all of the cards in this deck. In The Fool, we see a small (dog sized) mythical creature with his jaws clamped on the Fool's stick - something that the silly Fool does not seem all that worried about! The High Priestess is sitting at a lovely coral colored table, but she does not appear to be all that happy. This may be due to t he coral colored book that is sitting on her head! The Empress, seated, with her robes around her and a bird with outspread wings in her left hand, is one of the gentler cards in this deck, and does reflect the traditional nature of the card.

I liked the Hierophant, also in coral robes, with what appear to be coral creatures in the background. He stands on green ground, with a desert behind him that holds a pool of water, and birds swimming in it. The Chariot is one of the more "otherwordly" cards, with the chariot itself being a fish, which is draw along by two small dogs. A tree, with a human figure coming from the middle of it, is seen to the left of the chariot. The charioteer has human legs, upper body encased in metal, with an arm and hand coming from the top of the metal visor. A human figure appears under the bridge that the chariot is crossing, and looks up at it.

The Hermit appears, seated, with his hands in prayer in front of him, under what appears to be some kind of shell. A large mantis-style mythical creature sits on top of the shell. the wheel of fortune has all of its figures (human, and human/creature combinations) contained within its wheel, with an Owl sitting on top of it. Death appears as a female type figure, in gray/white robes, standing in front of a landscape with body parts coming up from the earth. (Bosch evidently felt that women were the root of all evil!)

Judgment is quite interesting, with two angels in the upper part of the card, with their horns forming a cross, over a landscape of people sitting on the earth and coming up out of it. The Pips all show surrealistic scenes, with the appropriate number of suit icons included. The Court Cards are very basic, with the Kings and Queens shown either standing or seated against a fairly normal background. The Knaves are also standing, with the Knights shown riding mythological creatures. The Minor Arcana, for whatever reason, does not appear to be as color intense as the Major Arcana is. It is interesting to note the use of water, fish and birds in this deck. What appears one thing at first glance can be something else entirely when you apply its esoteric meaning.

The "Bosch Tarot" is intended, according to the LWB, to reflect the Tarot as it is filtered through the universe of the sixteenth century in Bosch's paintings. We have to remember that during these times the collective imagination was shaped by tales of Heaven and Hell, beatification and damnation. From the LWB: "The Bosch Tarots are intended to be a window on that world to be used carefully to explore it and in doing so to explore the things we fear."

As such, the illustrations in this deck do not, to my mind, necessarily reflect the traditional nature of the cards. They do, however, open our minds to another world. This is not a true Tarot deck that can be worked with in any sense of the word. It is an art deck, and should be appreciated as such. Having said that, I might add that if one is stuck somewhere in a personal project, doing a reading with this deck has the power to blast away the cobwebs and allow new thought in. It may come in on a wave of sunlight, or on a moonbeam, but it will come in.