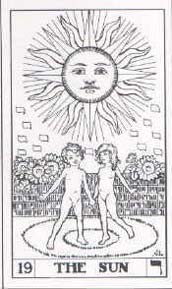 Also known as Builders of the Adytum Tarot

Almost similar enough to the Rider-Waite to be classed as a clone deck, The Builders of the Adytum Tarot is printed in black and white only and is intended to be coloured by the user.


Card Images from the B.O.T.A. Tarot 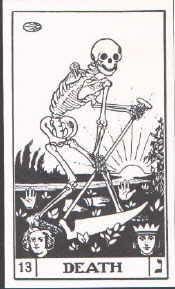 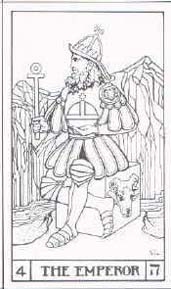 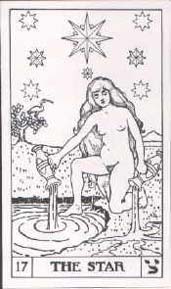 To start with, I had to look up "adytum" in a dictionary, which defines the word as the innermost room or shrine in certain old temples, to be entered only by a priest, or a sanctum.

So, there is a mystery tradition associated with this deck. Well, I'm here to talk about the deck I hold in my hand, and not the mysteries the deck may be about. I purchased my deck shrink wrapped, without a box and without a booklet. Just a deck of cards, which cost $7 (US).

Just a bit of background: The story is, every initiate in the seminal Hermetic Order of the Golden Dawn, the late 19th Century esoteric society, had to make a personal copy of the master Golden Dawn Tarot. Members of the order included Pamela Coleman-Smith, William Butler Yeats, Aleister Crowley, Arthur Edward Waite and Paul Foster Case. Three of them went on to publish their own decks and found new traditions: Crowley, Waite and Case. The B.O.T.A. is the deck created by Case.

This is a 78 card deck. In the Major Arcanum, Strength is 8 and Justice is 11. The suits are Wands, Cups, Swords and Pentacles. The court cards are King, Queen, Knight and Page. The majors and court cards are illustrated; the minors revert to the Marseilles tradition and are illustrated only with suit symbols. The art is black line drawings on a white background. The cards, whose corners are squared off and not rounded, are just a little heavier than index cards, or business cards. In fact, the backs of the cards, with a symbol in the center and the B.O.T.A. address printed at the bottom, look like over-sized business cards. The cards are 2 1/2" x 4 1/4" inches (6.5 x 11).

The Smith-Waite deck was first published in 1909, and the B.O.T.A. deck just a few years later. The cards in the Major Arcana are so similar, this might be the first Smith-Waite "clone." There are differences. The Death card, for example, depicts a skeleton walking through a wasteland past severed heads and body parts.

It seems this deck also is available with an instruction booklet written by Case and describing the cards and giving coloring instructions. I haven't seen this booklet. But, mystery tradition aside, if you want an original self-colored deck, why follow someone else's instructions?

And, the fact that you can color this very inexpensive deck yourself, is one of its joys. Whether you use watercolors, watercolor pencils, Crayons, Magic Markers, or almost anything else, the flimsy card stock is sturdy enough to stand up to rigorous coloring. I find, when coloring in the tiny details on the cards, that I really think about the symbolism.

Here's a tip, whatever medium you use to color the cards. After they are colored, at art stores you can buy a fixitive spray. Do not spray this directly on the card -- you might end up with a squiggley mess. Instead, hold the card vertically, and spray parallel to it, so just the fine mist of overspray lands on the cards. And, since fixative in art stores is very expensive, try cheap, generic hair spray. It works!

I strongly recommend this deck for anyone who wants to try coloring their own Tarot deck.

I do not recommend B.O.T.A. for a reading deck. The black and white line drawings are very dry. The deck would not stand up to repeated shufflings.

Case was the foremost Tarot interpreter of the 20th century.  The only possible competitor is Crowley, who never intended any of his work to be easily accessible and whose methods are unsafe even for many who have already experienced cosmic consciousness.

Waite's and Case's Tarots are similar because they are both based on the Golden Dawn Tarot.  Case's is later and more refined than Waite's.  The major arcana of this deck was published uncolored in the original edition of his introductory work, "The Tarot:  A Key to the Wisdom of the Ages," widely regarded as a highly profound work.  By presenting the principles of Tarot construction explicitly and thoroughly, this book prepares students to begin to use Tarot as it was intended, as a gateway to higher consciousness.

Case was the first, and may be the only, initiate to publish a deck intended to be colored by the student, as was required in the Golden Dawn.  Instruction for coloring this deck are available in the booklet "Highlights of Tarot" from Builders of the Adytum (www.bota.org).

Coloring each card while spending substantial time meditating on the points raised in "The Tarot" is an excellent exercise for students at any level.  The student will be following Mathers, Waite, Crowley, Regardie, Yeats, and Fortune, as well as Case.  No other deck allows, let alone promotes, this kind of work or the benefits to be gained thereby.

Long before I became a member of Builders of the Adytum, I was aware of Paul Foster Case and his writings on tarot. I was also very aware of the unique decks the B.O.T.A. made available intended to be colored by the owners.

Not familiar at the time with the Golden Dawn or the variety of groups founded upon those pillars, I didn't understand the importance of taking the tarot in hand and committing an act of personal creation upon them. It seemed odd to me, like rounding the corners of a square-edged tarot deck with a hole punch, for instance. At the time, I didn't understand and I couldn't bring myself to put personal touches like that on my cards.

Years later, I finally understand. If you do anything in your personal tarot experience, I recommend getting one of the B.O.T.A. decks (all 78 cards, if you want a full experience) and handling them one at a time, lovingly and creatively.

The process of learning your B.O.T.A. tarot deck, of choosing the materials you will use to color the cards, and then sitting for however long it takes to color each card - all the while meditating on the card's meaning and what it means to you personally - all adds up to a deeply spiritual and profoundly educational experience.

In this day and age of downloading large books, databases of information and the availability of hours upon hours of videos that claim to teach various Mystery Traditions, the idea of taking your time, of meditating slowly and intentionally on each card (ideally while reading Case's work), this methodology speaks to the wisdom of a time when learning a Mystery Tradition took time, took effort and could not be absorbed lightly.

For all these reasons, I fell in love with the B.O.T.A. tarot deck and eventually joined the Builders of the Adytum as a lifetime member - after all, such knowledge should be worked on for a lifetime. This is why some call it the "Great Work" - like coloring the cards and spending time with each one and learning them backward and forward, work is required.

While I won't repeat what other reviewers have said here in terms of the technical components of the B.O.T.A. tarot, I would like to reiterate and call to attention to potential buyers of this tarot that it is interpreted through the ancient tradition of the Holy Qabalah. I thought I was ready for Qabalah when I was younger, but after stepping away from occult studies for a decade, I found that in my 40's, I was much more ready to seriously apply myself to study of tarot and Qabalah.