The Brotherhood of Light Egyptian Tarot is the companion deck to the book, The Sacred Tarot, by C. C. Zain. These cards were first designed in black and white in the 1930s, and then redesigned in full colour in 2009.


Card Images from the Brotherhood of Light Egyptian Tarot 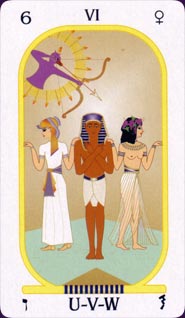 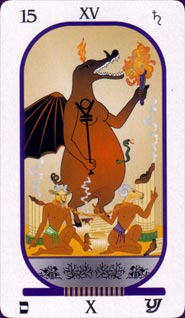 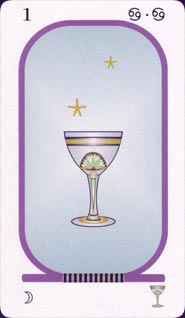 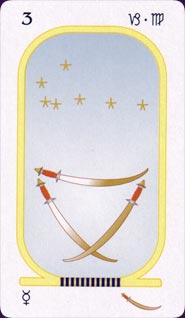 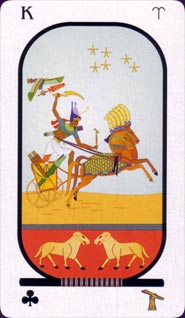 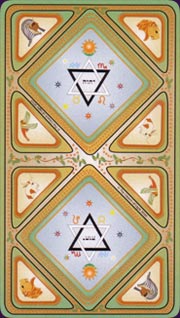 The Brotherhood of Light Egyptian Tarot acts as the companion deck to C. C. Zain’s book The Sacred Tarot (also published by The Church of Light. The LWB (Little White Book) that accompanies the deck is an outtake from the larger book. This is a traditional 78 card deck. Two extra cards accompany the deck – one listing the Brotherhood of Light Lessons, and one on The Mantram of the Will, or The Synthesis of Magic.

The LWB provides short descriptions and interpretations for each of the cards, as well as a short introduction to the book “The Sacred Tarot”, and a brief history of the deck. The first cards were designed by Gloria Beresford in 1936. In 2003 Vicki Brewer redesigned the original black and white images, and in 2009 she had completed the full color Egyptian Tarot cards. Two spreads are included at the end of the LWB – a five card Yes or No spread, and a seven card Magic Seven spread. From the book:

In Divination, Arcanum XIX may be read as Happiness and Joy.

Arcanum XIX expresses in the spiritual world, the supreme heaven.
In the intellectual world, true happiness.
In the physical world, sacred union.


Remember then, son of earth, that the light of the mysteries is a redoubtable fluid, put by nature at the service of the will. She lights those who know how to direct her; she strikes down with a thunderbolt those who ignore her power or who abuse it. If Arcanum XIX should appear in the prophetic signs of thy horoscope, happiness awaits thee in domestic life if thou knowest how to strengthen the conjugal circle and guard its sacredness in the sanctuary of the heart.

This deck incorporates the arts of astrology, alchemy and magic (the Tarot). It also contains a unique correspondence between the twelve zodiacal signs and thirty-six ultra zodiacal decanate constellations and the Major and Minor Arcana. Color is used to help the unconscious mind focus on gaining the inner meaning from each card. It is expressed in the cartouche border, with the first nine Minor Arcana corresponding to the first nine Major Arcana.


The cards themselves are 2 ˝” by 4 Ľ”. The design for the card backs was derived from the tradition of the “carpet page” seen in illustrated manuscripts such as the 8th century Lindisfarne Gospels. It is two mirrored images, the center of which is a diamond shape, with the emblem of he Brotherhood of Light in the center. Two inter-laced trines are at the center, with a unite sun and moon at the apex. Surrounding the trines are seven stars and the four fixed signs of the zodiac. The base of the dark, downward pointing trine represents the point where the twin souls (Divine Spark of Deity), separate to begin their involution into matter. The upward pointing light trine depicts the evolutionary journey of the separated souls, and their assent through matter into higher dimensions to achieve the reunion of soul-mates (conjoined sun and moon). The fixed-sign animals in the four corners run clockwise, forming the Masonic formula for mastership: To Know (Aquarius), To Dare (Leo), To Do (Taurus), and To Be Silent (Scorpio).

The card faces show a Ľ” white border, followed by a thinner, color coded cartouche border. The Roman numeral for each Major Arcana card is centered at the top of the card, with the number in in the left hand corner, and the associated astrological glyph in the right hand corner. Three kabbalistic glyphs run are seen on the bottom left hand, center, and right hand side of the card.

The Major Arcana titles are as follows:


The suits are Scepters, Cups, Swords and Coins. The Court Cards are King, Queen, Youth and Horsemen. The Horsemen do not represent people, they represent thoughts or unseen intelligence.

I loved the coloring in this deck, which is pastels of yellow, green, blue and orange. The theme is, of course, Egyptian, with the artwork being very minimalist. The Minor Arcana are Marseilles style, showing icons only. I liked the arrangement of the icons: Aces are the icon standing alone – no hand coming out of the clouds here. For the Deuces, the Scepters and Swords are crossed, while the Cups and Coins are side by side. The treys are all in the form of a triangle, while the Four’s are in the form of a square. The Fives are all grouped together, with the Scepters and Swords crossed, and the Cups and Coins both form “X’x”. The Six’s show two triangles, while the Seven’s show an upper triangle and a lower square. The Eight’s show two squares, while the Nine’s show three triangles. The Ten’s show two triangles and a square.

The only figures facing forward in this deck are the King of Coins, the King of Cups, the Veiled Isis, and the male figure in The Two Paths, The esoteric imagery in this deck is blended in well – the Magician’s table is a cube, Isis Unveiled and the Sovereign sitting on cubes, the Charioteer has a sword in his right hand and a scepter in his left hand and so on. It is interesting to note that the Martyr has his hands tied at the wrist, instead of being free. I love that The Reaper has a beautiful rainbow over his head! The Black Magician shows a crocodile-like figure with wings, holding a flaming torch with what appears to be a snake in front of him. The Tower, of course, is depicted as a pyramid. The two mountains in The Moon have been replaced with pyramids. The Sun shows two adults, as opposed to two children. I adore The Sarcophagus, which shows a male figure, a female figure, and a child’s figure, wrapped as mummies, coming out of a sarcophagus! Instead of a dog, The Materialist gets a crocodile-like companion also.

I love this deck – the coloring and minimalist imagery brings me a sense of peace. I would advise, however, that it be used with the companion book (which I need to purchase!). This is not a beginners deck, but could be used with a minimal knowledge of the Tarot. It would be of interest as a theme deck (Egyptian), for the artwork (Egyptian minimalist), as a collector’s deck, or as a reading deck for someone with a basic knowledge of the Tarot.