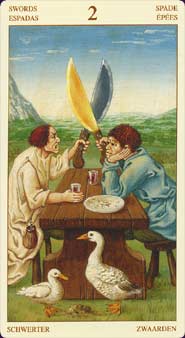 Inspired by the rich and detailed artistic style of Flemish painter, Pieter Bruegel the Elder, these cards show the daily life of the medieval peasant in lively fashion. It's a rather more earthy Tarot than the Giotto Tarot by the same author - this one features drunk peasants!


Card Images from the Bruegel Tarot 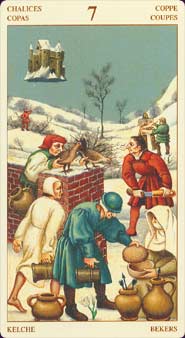 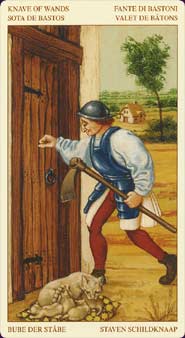 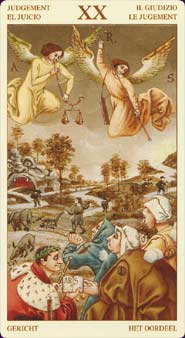 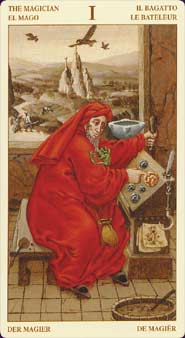 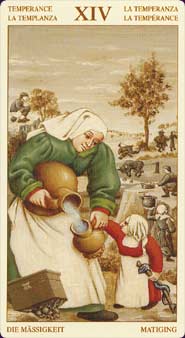 Pieter Bruegel, a sixteenth century Flemish painter, specialised in painting rich and detailed scenes of nature and country life. The Bruegel Tarot, with art created by Guido Zibordi Marchesi, offers a window into the life of a medieval Flemish village through proverbs and folk wisdom.

The style of the Bruegel Tarot might seem familiar, as the artist also created the images for the Giotto Tarot. But in theme, the two decks are worlds apart. The Bruegel Tarot’s lively, rich and grotesque (but not as much as the Tarot of Dürer) peasant lifestyle is in complete contrast to the formal, stately figures of the Giotto.

We see homely country scenes; a cat feeding her kittens in the Knave of Wands; a Chariot of a hay wagon, pulled by a donkey; many cards featuring stages of ploughing, sowing, harvesting, as every one of the cards is set outdoors. My favourite cards is the Strength card (numbered as XI), where a pious housewife calmly subdues a fierce-looking demon, armed only with a spare kerchief.

Like most Tarot scenes, the main figures are in the foreground, but in the background lies an unusual wealth of detail. Sometimes trees and animals of the native landscape, more often people interacting. Standing around, arguing, working, drinking, playing, goofing off, looking after children, going about their everyday chores and lives.

Each card is linked with a down-to-earth, sensible homily with guidance and advice for living, which was the inspiration for the image. The booklet’s meanings give a literal translation of the proverb, and, fortunately given who difficult it can be to understand another language’s proverbs, another meaning approximated in English. The keywords given are standard enough, but the proverb and image are often off in another direction.

Some examples from the booklet:

The Magician. Will. Intellect. He who paints a flower does not give it a scent. (Something imagined in inferior to something real).

5 of Pentacles. Courage. Loss. Those who wear armor hang the harness bell on the cat. (Those who must fight leave silly things at home).

Ace of Wands. Birth. Victory. Mushrooms can appear at any moment. (New things happen all the time).

Each suit is associated with a season. Swords = Spring, Wands = Summer, Chalices = Winter, Pentacles = Autumn. The colours of each card are mostly dull natural blues, greens, browns of sky and earth, and less often, an accent of rich red. The card borders are cream-coloured with brown print, while the backs of the cards have a mirrored image of the Sun card in brownish sepia.

A comical, earthy Tarot deck. Not for the beginner, but something different for the experienced reader or art deck collector.

The Bruegel Tarot deck is one of several decks published by Lo Scarabeo based on a famous artists work. I am not an artist or art expert. To my eye, Guido Zibordi Marchesi, the artist who created these cards in Pieter Bruegel the Elder’s style, did a very good job of capturing the essence of the “Peasant Bruegel”.

This is a standard 78 card deck. The suits are Swords (Spring), Wands (Summer), Pentacles (Autumn) and Chalices (Winter). The court cards are Knave, Knight, Queen and King. The art is framed in an off white border. Each card is identified in the border in five languages. Mirror images adorn the top and bottom half of the card. In soft sepia tones, a jolly peasant couple cavorts in the foreground, while other peasants go about their daily business in the background, the same image appears in full on the Sun card.

Why choose Bruegel? He lived in Europe in the early to mid 1500s. Tarot was an established card deck, Venetian sonnets written about 20 years before Bruegel’s travels to Italy describe parlor games using the Tarot trumps as inspiration for poetry. No doubt Bruegel was familiar with Tarot.

Bruegel was also a bit of a nonconformist. Most artistic subject matter of the time was religious material and commissioned, posed portraits of the rich and the royal. Bruegel painted peasants indulging in daily life, sometimes pious, sometimes rowdy. He often disguised himself as a peasant to crash weddings and other social events. These events and the people at them became the source material for much of his work. He did not shy away from difficult subjects, his observations of peasants, and their reaction to social pressures such as the Reformation, were controversial in their day. In short, Bruegel is the kind of artist who might have painted a tarot deck, if he had the opportunity.

One of Bruegel’s most famous paintings, “Netherlandish Proverbs”, is key to this deck in two crucial ways. In the painting, originally titled “Folly of the World”, Bruegel depicts peasants acting out various popular proverbs, or “old sayings”, of the day. Each card in the Bruegel Tarot deck is associated with a proverb. The painting uses a landscape as backdrop for many different scenes. The landscapes on the minor arcana cards are used in the same way, as a backdrop for several different, often unconnected, images.

The major arcana takes a different approach. Usually, these are the prettiest, most richly decorated cards in a deck. In the Bruegel deck, only the key figures appear in color. The gentle sepia backgrounds look very much like the pen and ink original Pieter Bruegel the Elder drawings I saw at the Frick Museum in Pittsburg, PA.

This unique approach directs attention fully towards the key elements on each trump. It also expresses the essence of the Peasant Bruegel. While the artist elevated the “lower class” to fine art, the deck brings added significance and symbolism to the minor arcana. Naturally, all the trump and court cards feature peasants. The Empress wears a crown and holds an orb, but she’s dressed as a peasant and holding a broom instead of a scepter. She herself does not appear to be pregnant, but there are two very pregnant peasant women in the background.

There are three ways to use any Tarot deck in divination. You can use a traditional cartomancy approach, you can follow the approach the deck designed intended, or you can go with your gut feeling. If you want to follow the deck designers approach and use the proverbs associated with each card, the LWB is indispensable (unless you have a really good memory!). Each card has key words and a proverb. That’s a lot of proverbs to memorize. The key words follow the usual RW interpretations fairly closely. The proverbs don’t. Some dovetail nicely with the traditional meaning, some are a bit of a stretch, and some are completely different. Some proverbs are familiar, others are not. Some proverbs just don’t survive the translation from culture to culture, across time, through languages, something just gets lost along the way. So many proverbs are defined with a summary that makes sense, even if the saying does not.

In the minor arcana, the artist used Bruegel’s approach of treating the landscape as a background for several different scenes. These mini scenes often include clues to the sayings. But, some of these sayings are not easily translated to a still painting on a card, even with the advantage of including several different aspects or moments in the same image.

The 7 of Chalices is an example of traditional associations, keywords, proverbs, and card images all fitting nicely together. The traditional meaning is daydreaming, lofty ideas, or a wide range of choices, all of them good. The Bruegel key words are “illusion, imagination”. The proverb is “To build castles in the air”, summarized as “to daydream”. The clue on the card is unmistakable, a castle floating in the sky.

The 2 of Swords is an example of a card with a proverb that deviates from the traditional meaning and doesn’t fit into a clear, neat symbolic image. The traditional association is a balance of opposing forces or a stalemate. The Bruegel key word is test. The proverb is “Man can be understood by three behaviors, anger, his purse and his glass”. The summary is “The true nature of a person is shown when he gets mad, when he spends, and when he drinks”. The card depicts two peasants arm wrestling with swords, certainly a test. One looks bored, the other is quite angry, with a glass clutched in his free hand. He’ mad and he’s drinking. Did he also gamble on the outcome? Clearly, it’s a stalemate.

The 7 of Swords is an example of a card with a proverb different from the common associations and hard to illustrate. The usual interpretation is “thief, loss, betrayal”. The Bruegel keywords are “love, health”, the proverb is “It’s not love if there is no jealousy.” The card depicts a monk tending an old person in bed, two men consulting over a dog, a man with his back to everything and two male figures in the distance, who look a little odd. Perhaps the real meaning here is that much of what we call “love” is not?

The LWB offers about 11 pages of English text about the deck, including how to read a spread. That leaves very little space to explain the many details in the cards, leaving the reader to fill in the blank on his or her own. For example, on the 7 of Swords, what are those two figures in the distance on the left doing? Bruegel is known for “earthiness”, the position of the arms is suggestive of one or two “earthy” activities. There is a dog on the ground covered in a white cloth, while two figures hover over. One might be the dog’s owner, the other, holding a sword, might be a veterinarian. Or a butcher. What are they planning to do? What does it mean in relation to the proverb? There is a sword plunged into an ear, a scimitar going for an hourglass, and a knife plunged into a stone tablet with Roman numerals. How do they tie into the theme of the card?

This is not an easy deck. I would not recommend it for beginners, because it deviates from the traditional cartomancy meanings. The proverbs and images can be confusing, even when coming from the artist's key word point of view. I would recommend this deck for anyone with some reading experience, who enjoys decks loaded with symbolism. The proverbs add a unique layer of interpretation beyond the traditional approaches. The imagery, especially on the richly illustrated minor arcana cards, is detailed and intriguing.

Applying Peasant Bruegel’s approach to a tarot deck, particularly using common folks on the court and trump cards, is unique and refreshing. The artist captured Bruegel’s spirit in the antics on the card. (Unfortunately, much of the symbolism is not fully explained. I was unable to locate a detailed book for this deck.)

I enjoyed studying the detailed images with a magnifying glass. The colors on the minor arcana are brilliant. The court cards and major arcana are more subdued, with emphasis on the central figure instead of a busy background. This is a good deck for anyone who collects beautiful or artistic decks.