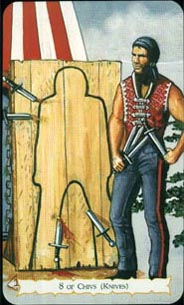 The Buckland Romani Tarot is based around English gypsies and has expressive and beautiful artwork. The cards are borderless, and give the feeling that you could step into the picture. It isn't a standard Rider-Waite type deck; among other things, suits have been renamed to Koshes, Koros, Bolers and Chivs, (Staves, Cups, Wheels and Knives), and the Magician is shown as a woman. Previously out of print, it's available again from Galde Press. 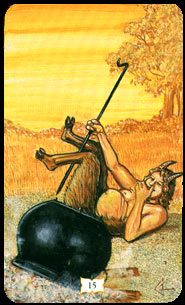 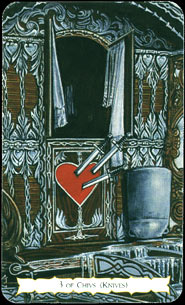 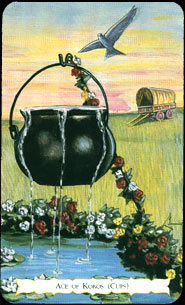 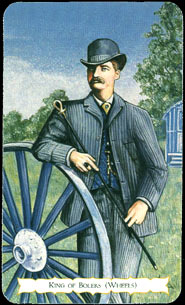 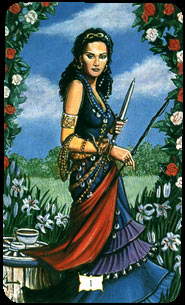 Oh what a joy to look at, to feel, to touch. As soon as I opened the box, this pack spoke to me; spoke to my cultural heritage. This is a tarot pack which includes cards and a book. The cards have imagery taken from the British Rom culture, a culture often ignored. The British Rom community existed for many hundreds of years, but so much of it has now been lost. The western outpost of the Rom people was strong and vibrant and these cards portray that culture. The Buckland family are a well known and respected Romani family in Britain and Raymond Buckland has take this experience with him and draws on it often in his magickal works.

These cards talked to me so easily, brought me into contact with my father, helped me travel further down my road. These are the first cards I have used where the reverse position feels important and has real meaning. These cards have a life of their own, they talk to my soul - as I do a reading, they are me.

These cards are well presented. The accompanying book is comprehensive and easy to read. The illustrations are of the highest standard.

By reading the book and using the cards one will learn about the British Romani Culture, but not too much. Hopefully the cards will talk to your heart your soul, as they do to mine. I am sure that if one uses these cards often then one will want to find out more about the culture as well. Romani culture worldwide spreads from Rajistan (India) in the east to Wales in the west and from Scotland and the Baltic in the north to the Sahara in the south. If you are looking for a tarot with a difference then this may be the one to explore. It has become my pack of choice and I hope it will become the pack of choice for others.

Raymond Buckland, author of several Pagan books, wrote the companion book and presumably provided the creative impetus for the Buckland Romani Tarot deck. The result of his and artist Lissanne Lake's talents is a novel and well-crafted tarot deck with cards that offer a variety of interpretations to the reader.

The cards show natural landscapes set in time pre-1950. Gypsies and gypsy caravans in various states of decoration are features in almost every card. Close up or far off in the background, decorated or run-down, all depending on the mood of the tarot card. In almost every card it is possible to see the sky, which is coloured appropriately for each suit - Wands are a golden golden-skied dawn, Cups are a rainbow blend, Swords bleak and snowy, Pentacles the blue skies of the afternoon.

Physically the cards are rectangular, and printed on thin and flexible glossy cardstock. But their most striking feature is that they are borderless. The cards give the feeling that you could step into the picture. Most tarot decks have wide or colourful borders around the central tarot scene that interrupts the landscape and constricts the art, but the cards in the Romani Tarot have no such limitation, as even the titles on each card are small.

The scenes depicted in the Romani Tarot generally show expressive but ambiguous situations, landscapes or still-life images that could be interpreted in several ways, depending on perspective. Some cards are extremely easy to interpret but some are more difficult and do not directly relate to the corresponding Rider-Waite card in the way you might imagine.

Unusually, the Magician card shows a woman. Suits have also been renamed to Koshes, Koros, Bolers and Chivs, (Staves, Cups, Wheels and Knives). The suit of Swords can be a little confronting at first, with its bleak landscapes and sharp looking swords. The Ten of Swords card especially has an unpleasantly violent feel.

The companion book for the Buckland Romani Tarot offers no list of keywords or phrases for the meaning of the cards, only a written description of the card's symbols and a series of questions designed to invoke thought in the reader. In short - it's up to you to decide!

Overall, Buckland's contribution of the knowledge of the customs and traditions of English gypsies and the strength of Lake's artwork combine to create a useable and very powerful tarot deck that has a permanent place in my collection.

Authentic Gypsy Tradition by Raymond Buckland, and illustrated by Lissanne Lake. Raymond Buckland is Romani on his fathers side, and he remembers hearing tales when he was young about the colorful Gypsy way of life. From the back of the box it says that Raymond Buckland was brought up by English Romani Gypsies. There are actually quite a few Romani in England. Buckland has written dozens of books on gypsies and witchcraft, this is his first tarot deck.

The measurements of the cards are 2.8 x 4.6 inches and the back of the card is divided into 4 rectangles alternating in blue and green. The center is a red wheel with 16 spokes. It comes as a deck set with 78 cards and accompanying book. Son of a full blooded Romani, Buckland is proud of his heritage, and uses the Romani language liberally in the book. It includes English to Romani and Romani to English word lists. Which presents a full set of fresh, insightful interpretations written specifically to match this deck, along with traditional meanings. It also includes a Romani-English word list, historical background on the Gypsies, guidance on caring for and using the cards, and a selection of spreads.

Many books on the Tarot are complex and obscure that it is discouraging for everyone but the advanced practitioner. This book however is written in simple language that makes reading and studying the Tarot a joy. There are also fascinating historical facts about the Gypsies, although the exact origins of the tarot are shrouded in the mists of antiquity, we do know for certain it is the Gypsies who are most directly responsible for keeping this ancient fountain of wisdom from fading away. An Buckland has given them the credit they are due. Discover how in their wandering, they have preserved the Arcane wisdom of many lands and civilizations.

The cards are based on the Rider Waite, but are adapted to the Romani culture. The Major Arcana have small numbers on the bottom to identify them. And the Suits are: Bolers for Wheels/Pentacles, Koros for Cups, Kosh for Wands, Chiv for Knives/Swords. With artist Lissame Lake and Buckland they produced the vivid images of the Gypsies as he experienced them in England before World War II and after. Buckland has embraced his Romani heritage and has created a Tarot set that shares the wisdom of his ancestors. He has chosen the Roma as they were in the mid twentieth century. Which evokes a certain historical feel, that gives the deck an element of mystery and charm.

An occult rule states that when someone says he's being clear and direct, he is actually being obscure and difficult. So it is here. For each card in this deck, Buckland gives the traditional brief keywords and then follows this with his own, extensive "interpretations". He starts by accurately describing all the various details on the card and then poses a long series of questions to the reader. These questions are misleading by design. With the great detail on each card, this is one of the most secretive decks ever seen.

The Gypsies of England are called the Roma, and have a lifestyle, culture and history of their own. They have not been able to preserve all their ways now days due to the changing laws but they have maintained their convictions about who they are. Trades, language, art and special practices such as fortune telling are alive in their communities. The regular journeys have given them a unique perspective on life and the world around. There is much wisdom we can learn from them if we choose.