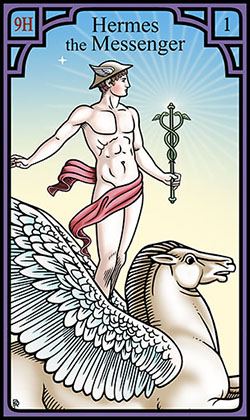 The Burning Serpent Oracle is the creation of Rachel Pollack and Robert M. Place, based on Lenormand imagery and illustrated in Place's stunning artistic style. The 38 cards can be used like a Lenormand deck, but they have also been designed to be accessible to beginners, and to have a deeper spiritual dimension that allows for personal visionary interpretations.


Card Images from the The Burning Serpent Oracle 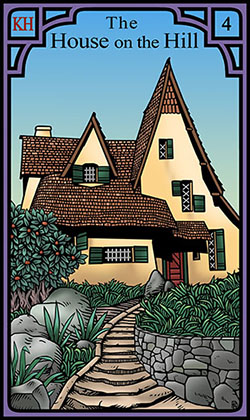 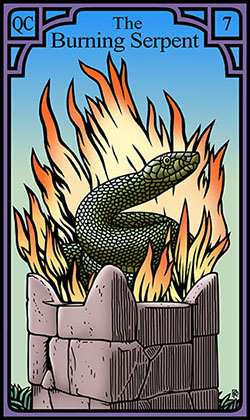 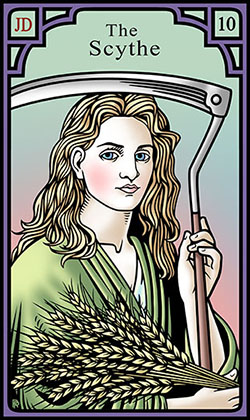 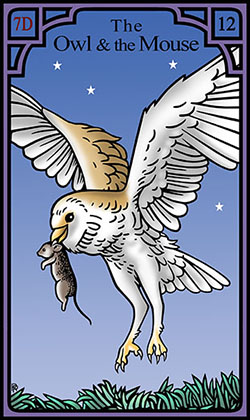 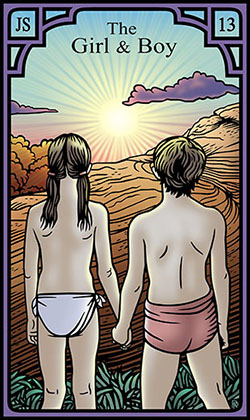 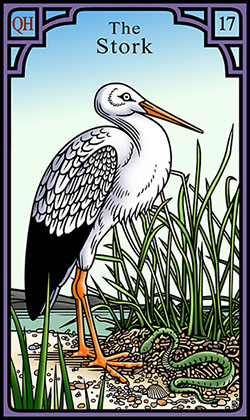 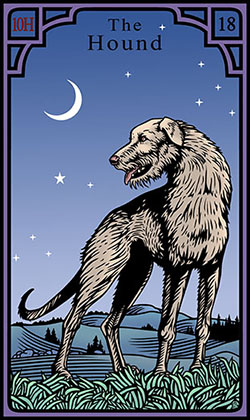 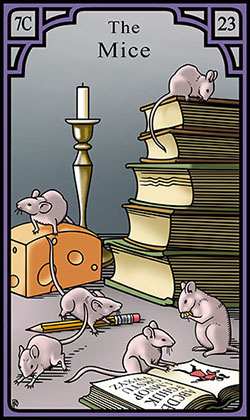 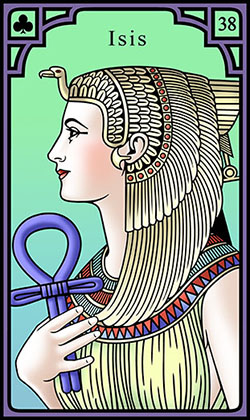 It’s very hard to set down The Burning Serpent Oracle, both text and cards, in order to write a review, as both are fascinating guides to my recent journey toward Lenormand wisdom. Rachel Pollack has written a thorough text, which patiently explains numerous facets of a good working knowledge of the intriguing Lenormand cards. And Robert M. Place, also a talented author as well as skilled illustrator, provides clear and uncluttered artistic images; crafting perfection through simplicity. The synergy of the combined talents of both creators of the Burning Serpent Oracle conveys clear and strong visuals, rich in both color and metaphor.

These cards will be recognizable across the room at a psychic fair, The Heart, with flowering rose and cool Demeter holding The Scythe. The Gold Ring promises more than a mere marriage commitment, as the ring provides a base for a Solomon-like temple. Cards 28 & 29, traditionally The Man (28) and The Woman (29) are doubled by including a female card 28, and a male card 29, each looking in the direction opposite of their traditional versions. Another “bonus” two cards are Osiris and Isis, thus boosting the standard set of 36 to 40 cards. Part of the significance of each of these Egyptian figures relates to the higher self of the man and the woman.

The text weighs nearly one pound and, at 263 pages, is packed very full into the 5 x 8 x 5/8 inches. It is a reader’s pleasure to find no typos and page after page of fascinating narrative, as the author weaves personal story, mythology, historical references, and spiritual and cultural connections into a practical discussion of how one might interpret each card. In fact, Rachel Pollack offers four well organized categories for interpreting every card: the most direct meaning, basic meaning expanded and explored, larger context and potential secret or mystical meaning. Each card is shown in black and white in full page size, and 43 revealing pages outline many variations on reading spreads with commentary and suggested meanings.

With each card, I enjoy the well-informed and creative variation of Lenormand image; truly this collaboration has yielded so many enjoyable images. The Burning Serpent rises out of an ancient Jewish altar, The Fox is found in 19th century London and a wee butterfly perches on top The Rusted Cross. Many more visual and textual surprises await the reader and practitioner of the cards. Card backs show a variation of Card 1, Hermes the Messenger. Also, slipped inside the box of cards, is a little white book of 15 pages with all the basic meanings. The artwork of the cards has the look of pen & ink with colorful but muted gouache; sensitive souls like me are not overwhelmed with garish and overly strong colors.

I like The Burning Serpent Oracle, and I believe the background of both author and artist, with their skills and years of work and study, have come together to bring us an oracle that will be utilized for many years to come.

I was very eager to work with the “Burning Serpent Oracle”. Once I had it in my hands, I was impressed with both the quality of the art, and the depth of the text. One would expect no less from luminaries Robert M. Place and Rachel Pollack!

“The Burning Serpent Oracle” consists of a 40 card deck and a 258 page companion book. (There are four cards added to the traditional 36 card deck – two versions of The Man (card 28) and The Woman (card 29), looking in the opposite direction of the traditional versions, with two bonus cards – Osiris (number 37), and Isis (number 38). I a very special manner, cards 37 and 38 reference the higher self of The Man and The Woman.

Pollack begins her introduction by noting that this is a book about meanings, very specific meanings, based on the 19th century Lenormand tradition. Based on, but not limited to. There is a deeper spiritual dimension to this deck, allowing the reader to access their own personal visionary interpretations. Something that I found interesting was that the cards, while named for a 19th century fortune teller, were actually not published until after her death. I really appreciate that Pollack places emphasis on how the images speak to each other, their ability to form (tell) a story, and how our lives are revealed through these stories. Pollack brings a world of experience to the interpretation of these cards. Melded together are personal stories, pertinent historical information, cultural and spiritual references. How interesting that the Lenormand tradition started out as a game, and evolved into a divinatory tool!

Each card is presented with a full page black and white image, keywords, positive and negative meanings for the card, a discussion of the imagery, and how to interpret the card (the direct meaning, the basic meaning expanded and explored, the larger context, and the potential mystical meaning.

At the end of the book is a section on doing readings, including getting to know the cards, formatting questions, and using both small and large spreads. Sample readings include a five card reading on choosing a house, a seven card reading about death, and instructions on the nine card square technique and a ten card spread. The format for the Grand Tableau (using all of the cards) is also included.

The cards themselves are 2 ľ” by 4 Ľ”. The back show a Ľ” white border, surrounding the image of Hermes. The card faces show the same Ľ” white border, surrounding images that are bordered in brown. In the upper right hand corner of the card is the card number, in the upper left hand corner is the corresponding playing card (i.e. The Dead Tree is card number 8, and is associated with the Nine of Diamonds (9D) ). The card title runs across the top of the card, in black lettering in the center. The styling of the images is drawn simply and clearly, with nice depth of color.

The images in this deck are all about everyday things in our everyday life – clouds, a bouquet, a fox, a bear, mice, a gold ring. They are also about things like a flaming tree, a burning serpent, and a book of life. he meanings in the Lenormand tradition are highly specific (the reader is not encouraged to add their own interpretations) – their reflect daily life with great clarity.

Hermes The Messenger (card number 1, associated with the Nine of Hearts), shows a man on a winged horse. He is wearing a helmet with wings, and carries a caduceus in his left hand. Keywords are messages, something brought, a visit, someone arriving or entering your life, speed, and moving.

The Voyage (card number 3, associated with the Ten of Swords), shows a sailing ship on the high seas. Keywords are good fortune, usually from commerce, possible inheritance, travel, and renewal.

The Book of Life (card number 26, associated with the Ten of Diamonds), shows an open book on a pedestal, with a lit candle behind it. A wreath surrounds the pedestal. Keywords are secrets, whether concealed or revealed, destiny, “what is written”, knowledge, and education.

The Burning Serpent (card number 7, associated with the Queen of Cups), shows a serpent, rising from what looks like a tower, surrounded by flames. The keywords are enemy, betrayal, danger, a smart, possible manipulative woman, spiritual transformation, rebirth or restoration, ancient wisdom, intuition.

The House on the Hill (card number 4, associated with the King of Hearts), shows a quiet, landscaped house. The keywords are happy prosperous home, community, security, and sense of self.

Whether you choose to use this oracle to read for others, or to read only for yourself, it is well worth the investment. We are gifted with the superb artistic and intellectual talents of both Place and Pollack, and we need to make the best of this gift!

Both authors of this deck have had a great influence on my Tarot reading over the years. I have used Bob's Alchemical deck since it first came out, and have several others. I love his artwork, and the AT is a very evocative deck.

I had not heard of Lenormand decks until he began work on the Burning Serpent. Loving his work as I do, and Ms. Pollack's, and eager to learn a new system, I picked this one up and began to study the history of the Lenormand decks. The book included with the deck provides a very good start on that research, and explains the history of the various images, and how Bob tweaked and played with them. I love that he used real and found objects as subjects for some of the cards. Others have echoes of his work in alchemy, including the first card, the messenger, interpreted here as Hermes, and the Burning Serpent card.

The card stock is sturdy, and the colors are saturated and rich. There is a Art Nouveau look to it, including the artwork on the card backs and the vase on the Bouquet card. The darker cards, including the Dead Tree and Scythe are spooky, and the Cat O' Three Tails is downright scary.

I am a beginning Lenormand reader, and this set—deck and book—are a wonderful introduction.

Creators: Rachel Pollack, Robert M. Place
Publisher: Hermes Publication 2014
Deck Type: Oracle Deck
Cards: 38
Card Language: English
Back Design: Hermes in front of a sunrise and bordered by green twining vines
Companion Material: 260-page companion book by Rachel Pollack.
Extra Info: There are thirty-six cards in this deck, plus four variants, two of which are numbered 37 and 38, and two of which are simply alternatives to cards 28 and 29.