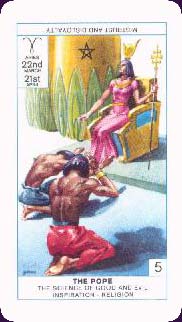 First published in Italy in 1912, the Cagliostro Tarot has illustrated majors and playing-card like minors. The deck has a strong astrological connection and each card has a corresponding celestial symbol. The cards are reversible and the suits are Clubs, Hearts, Spades and Diamonds.


Card Images from the Cagliostro Tarot 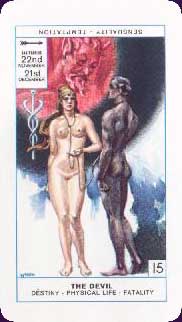 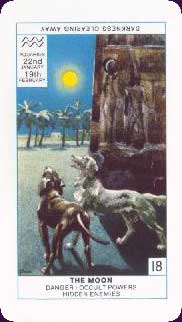 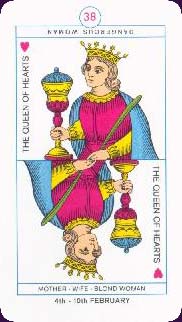 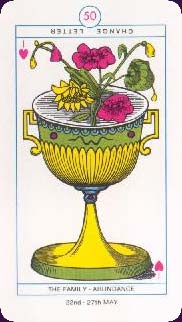 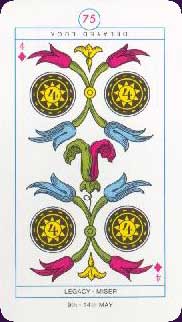 Excerpts From the LWB copyright 1981 by Stuart R. Kaplan

“Introduction: The Cagliostro Tarot deck was first published in 1912 in an Italian edition entitled Il Destino Svelato Dal Tarocco. The publisher, Modiano S.p.A. is one of Italy’s leading printers whose operations in the manufacture of playing cards dates back to the 19th century under the name La Concordia.

A fire in 1913 and a bombardment in 1944 destroyed part of the Modiano archives. Nevertheless, it has been possible to ascertain that the original card designs for the Cagliostro tarot deck were prepared by Bruno Sigon, and Italian artist in Modiano’s employ.

There exists a close resemblance between some of the Major Arcana cards by Sigon and the designs by Goulinat, but Sigon takes various liberties with figures, facial features, various poses and symbols in order to present his own interpretation of each card….

So we know that Il Destino Svelato dal Tarocco was originally designed in 1912 by Bruno Sigon in 1912 as an Egyptian-based Trump set. The 56 minors are of a different hand. I have found notes that indicate that the minors were taken from a Milanese pattern.

It is stated that it was republished by Modiano in the 1975 as Cartomanzia 184, and in an English version in 1981 under the title Cagliostro Tarot.

Such statements are incorrect. And here we get to the real beauty of this deck.

Along the bottom (and reversed along the top) are keywords from Éliphas Lévi and Paul Christian. Or so it says here in the booklet. Actually the keywords actually mirror Etteilla’s 1783 Thoth deck, from which Lévi, Christian, and Papus used as a model.

On page 165 of the 2004 Destiny Books copy of Paul Huson’s Mystical Origins of the Tarot, we find the following entry: “(Note that Mathers mistranslates Etteilla’s “le present” as “gifts” or “presents”, and many cartomancers perpetrate this interpretation.)”

Wow…ponder that for a bit!

So in the Italian version we find the following keywords along the bottom: il presente – difficolą (the present (as in tense) – difficulties), and along the top (reversed meaning) as: adore - protezoni (adore – patronage). These meanings are reflected in the red backed Italian printed English version (The Present – Difficulties/Enthusiasm – Patronage).

Now allow me to pull out the blue backed Italian printed version made specifically for distribution by US Games Systems Inc. Keywords on the bottom: Generosity – Gifts. Keywords on the top: Jealousy – Envy – Bad debts.

What we have is not a translated version. Lip service to the original was not even paid. Once again, someone who ‘knows’ has forced sloppy scholarship onto Tarot.

And that is what makes this deck so wonderful! It’s a bit of history small enough to carry in your pocket. Landmarks from three hundred years of Tarot divination.

The art in the majors is just wonderful! Real Art Nouveau majors. Stuck with these cheesy minors from whenever, and Etteilla keywords. It’s like an artist’s nightmare. The differing styles clash. And that’s what makes it work.

One can tell by looking at this deck, that it was designed as a ‘fortune telling’ deck, AND a deck for playing Tarocchi (Tarok, Atouts) games. One will note the use of clubs, hearts, spades, and diamonds indices on the minors.

The Cartomanzia 184/Cagliostro deck is a working readers dream. The minors can be read in the style of Tarot de Marseille, or as anything pre or post Golden Dawn, they can be read with modern playing card (as they are indexed as such).

The deck is truly as flexible and dynamic as the reader.

It's kinda fun. And sometimes we just want something a tad diff...enough with the heavy meanings already - you know.