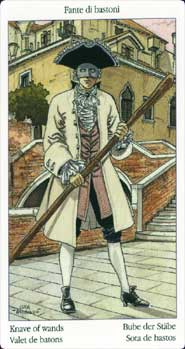 
Card Images from the Tarot of Casanova 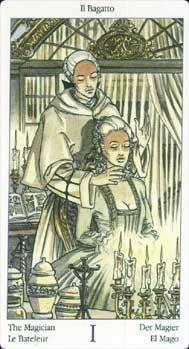 Tarot of Casanova Review by Solandia

The LWB assures us that the Tarot of Casanova is 'the result of considerable artistic and esoteric research'. They offer their apologies up front to those who may be offended by the theme, but invite others to approach the deck with an open mind. While the images are sexual and concentrate on scenes of Casanova's amorous adventures, they aren't as confronting as the images of the Garden of Priapo Tarot, and do actually relate to the tarot archetypes. The creator has also paid some attention to incorporating the romance and history of Casanova's surroundings - the canals and corners and buildings of what was at the time the Republic of Venice.

That said, women are the sex objects in this deck; there are plenty of busty woman shown full frontal or from behind, but male nudity is nearly non-existent. We see a male chest about four times - the Three and Four of Chalices and the Eights of Swords and Pentacles - but every other male is fully clothed and often masked as well. Most cards show men and women in various hetero sexual positions, dressed (or undressed) in the ruffled, bewigged, powdered fashions of Casanova's time, but not every card has a wide expanse of female flesh. The Aces are still-life images of Venetian canals and buildings, while all courts but the Queens are solitary and fully dressed men.

The deck's LWB works well with the cards, offering adequate explanation of the Casanova cards in divinatory keyword and short phrase form. If that particular card is a scene directly from Casanova's life, a note is also made after the keywords.

"I - The Magician - Initiative, single knowledge, ability, cunning, willpower, independence of thought. Note: Casanova and the Marquise of Urfé."

"XX - Judgement - Exam, consequences, to lay oneself care, the climax, spiritual or moral awakening. Note: The face shows reluctance and shame, but also awareness and an imminent decision."


Complete Details of Tarot of Casanova


Similar Decks to Tarot of Casanova