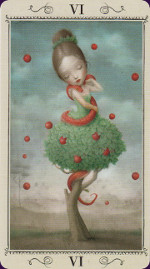 The Ceccoli Tarot Mini is the tiny version of the Nicoletta Ceccoli Tarot, a 78 card deck of enigmatic, enchanting and sweet illustrations by the artist of the same name. The deck is a portable and readable 4.4cm by 8cm in size. 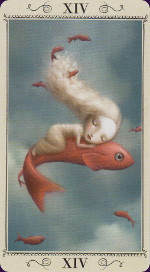 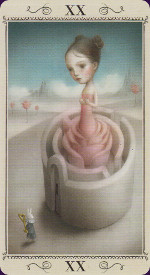 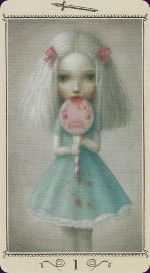 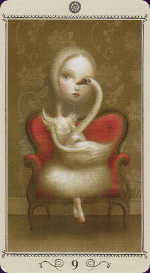 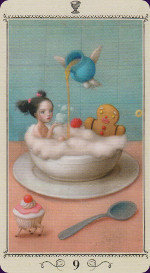 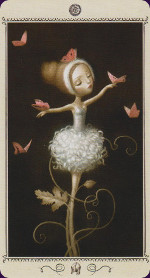 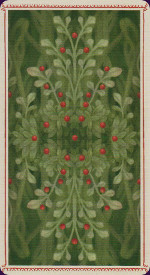 Childhood is the enigmatic country through which we all pass, and once we leave it’s borders we can never return. As adults we often look back to this time of innocence, fear, beauty, and mystery with profound nostalgia and longing. It is this bittersweet sensibility that infuses artist Nicoletta Ceccoli's Tarot.

This deck utilises pre-existing artworks by Ceccoli, that have been recast as tarot cards - with some being more than successful than others as far as tarot imagery goes. The artworks chosen especially for the Major Arcana and suit of Swords. are particularly outstanding. Other choices in the Minor Arcana remain fairly obscure until you match the little white book (LWB) description to the picture. It is in relation to the meanings ascribed in the LWB that the potential (and charm) of the cards becomes apparent. Take the 4 of Cups - a snow dome encases a rather indifferent mermaid lounging in a shell - the LWB advises “Discontent, isolation, ennui, petty desires.” Or the Nine of Swords - 2 tiny girls hide behind giant building blocks as a giant stuffed rabbit toy searches for them, the LWB gives us the divinatory meaning “Paralysing fears, panic, primitive instinct”.

The LWB is a truncated version of the one written by Lunaea Weatherstone for the larger/standard edition of this deck. It is a bit of a shame that the divinatory meanings have mostly been whittled down to a few key words. While they retain some of their charm, they also fall within the commonly accepted definitions. It is obvious that the explanations Weatherstone gives have been written to suit, sometimes even justify the chosen artwork. However there are occasions where this system fails and it is quite a leap from image to divinatory definition. While Ceccoli employs strong imagery and some peculiar archetypes, they are not endemic to tarot systems.To my mind the image should stimulate the psyche and lead us on a path toward interpretation, not leave the reader grasping to find an inner meaning. Tarot cards are doorways to understanding, not doorways to a mystery destination. Nonetheless, an experienced reader will no doubt be able to discern subtle nuances within the pictures that link image with meaning - if they are prepared to take time in doing so.

Ceccoli’s palette is muted and a little sombre, like a faded picture book. Her paintings are usually focused on young girls in surreal storybook or fairytale settings. Some are touchingly naive and innocent, others are dark and violent - that peculiarly bloodless brutality endemic to children's stories. There are recurring themes that are the quintessence of childhood - candy, ice-creams, toys, insects, mermaids, cupcakes, rabbits, Alice (in Wonderland) - often taking on nightmarish qualities and proportions. In the entire deck there are only two cards which human males, boys, are depicted; The Emperor, and the 7 of Swords. There are other nonhuman figures that are masculine such as the Hierophant (monkey), the Devil (an insect), and the 7 of Wands (a bug-eyed imp). The entire court, including Kings, are all depicted by girls. The images are clear and vivid, and the quality of the artwork has not been compromised. Even with this small deck none of the details or the gorgeous colours have been conceded or lost. The design on the back, a green plant with red berries, is fully reversible.

The cards are a wonderfully tiny 44 x 80 mm. The cuteness of this little deck really works well with Nicoletta Ceccoli’s artwork - it’s like a doll’s tarot deck. The card stock is good - very thin and quite flexible without being flimsy, and with a linen-like texture and a very glossy finish on both front and back. The slightly toothy feel is actually very helpful when handling such a small deck, as the cards would otherwise be prone to slipping through one’s fingers. The cards and LWB come packaged in an equally small box, made of sturdy cardboard. It can easily be slipped into a pocket, purse, or handbag for travelling. If you wish to protect the deck further, a snap-purse for glasses is about the ideal size for mini-tarot cards.

The Major Arcana are identifiable only by Roman numerals, no names. The Minor Arcana are designated by small symbols at the top of the card and a number at the bottom. The suits are Cups, Wands, Discs, and Swords. The Court cards are identified by a helmet (Page), a horse head (Knight), and differing crowns for the Queen and King. These designations are vital to identifying suit, court, and arcana since the pictures contain no traditional tarot symbolism whatsoever. This is perhaps the Ceccoli deck's biggest weakness - without the suit indicators and numbers this deck could easily be viewed as a beautiful and dinky little collection of Nicoletta Ceccoli's artwork.

I must admit to being quite a fan of Nicoletta Ceccoli’s illustrations so I find this deck utterly irresistible. I love her poisoned-sugar confections of sweet-faced little girls who meet the enchantments and terrors of an often puzzling world with their arsenal of artless curiosity, destructiveness, and ingenuity. If you already have the standard sized Ceccoli deck and love it, then this mini version is a must have. Anyone who loves Nicoletta Ceccoli’s artwork will want this deck, for certain. Overall this is a beautiful and unique tarot deck, best suited to an experienced reader.