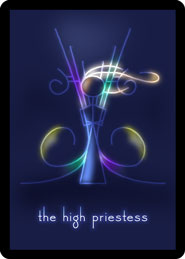 The Celestial Stick People Tarot is illustrated in a line-drawn style in neon colours on a dark background. The tarot symbolism on the 78 cards has been updated for a contemporary audience - the Chariot is a space shuttle, Swords are Quills and Wands are Brushes. It's a minimalist, modern, and unique deck. 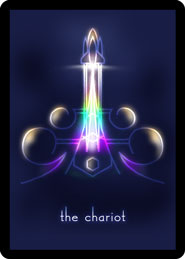 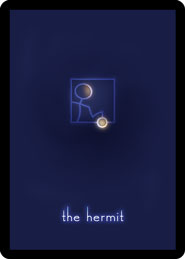 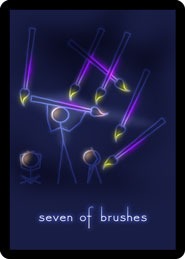 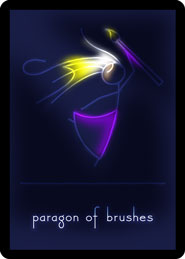 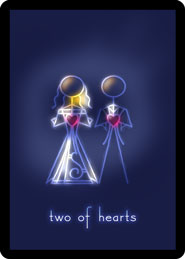 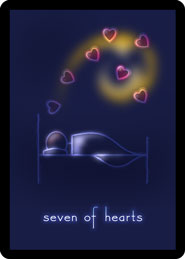 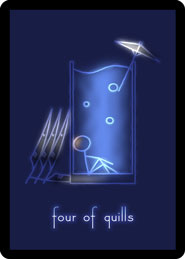 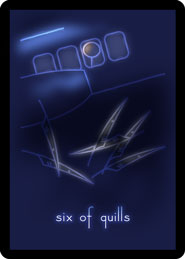 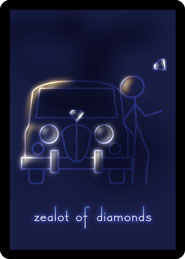 Tarot's impossibly ambitious goal is to limn the entirety of the human experience in 78 pieces of paper that can be held in the palm of one hand. Some decks approach this task with overwrought iconography. The High Priestess in the Rider-Waite-Smith deck, for example, is overloaded with symbols from several traditions. She wears the horns and sun disc of ancient Egypt's Hathor, or perhaps her crown is a waxing, full, and waning moon. She sits between columns from Solomon's Temple. The moon is beneath her feet, a reference to the book of Revelation. There are pomegranates, perhaps suggesting ripe wombs, perhaps the 613 mitzvot, or Jewish commandments. Meanings, here, are heavy and complicated.

Minimalist decks are a stylistic backlash against busyness, the symbols upon symbols that clutter the visual field and exhaust attempts at interpretation. The black-and-white Rotin tarot is radically minimalist; its Hanged Man is nothing but a sketch of a noose.

Minimalism helps to universalize Tarot. Tarot reflects its origins in medieval Europe. Its human figures are Caucasian. I like the International Icon Tarot deck for that reason – its humans are orange, purple, and green. It really is international, but not intrusive or preachy, as some heavy-handed multicultural decks are.

Of course, those experienced with Tarot will bring rich memories to any minimalist sketch. They will see more than the noose in the Rotin Tarot. In their mind's eye they will see the full hanged man, and all the times that that card came up in a high-impact reading, and the look of concentration on the querent's face.

The Celestial Stick People Tarot is my current favorite minimalist tarot deck. The humans in this deck are stick figures: straight lines for torsos and limbs; circles for heads. Designer Brian Crick reports that he was inspired by the images produced by subatomic particles in bubble chambers.

These stick figures appear on a dark blue background, with a black border. The figures glow against their dark background, as if they were the last lit neon sign at the end of a dark road, or ghosts of classic film stars haunting a midnight Hollywood back-lot. The palette is minimal: hearts (cups) are highlighted with red and yellow, diamonds (pentacles) with gold and just a touch of green, brushes (wands) with yellow and purple, and quills (swords) with steel grey. In this deck, pages are dreamers, knights are zealots, queens are paragons, and kings are mentors.

Crick's effort at communication of meaning in a simple format is part of what attracts me to his deck, and to Tarot in general. I am a teacher, and I am always seeking ways to communicate the maximum amount of information to my students with the minimum amount of unnecessary noise.

Crick's glowing lines and dark backgrounds well serve this goal of a minimalist deck: to pack the card with as much meaning as possible, with as little extraneous design noise or clutter as possible. Our eyes will read these lines glowing in darkness in the same way we read other objects we catch sight of at night: as only suggestions of what is actually there. Our eyes, and our minds, will attempt to focus, to catch sight of visual data we can't grasp because we can't see in the dark. Our minds will fill in what our eyes can't see.

In several cases, Crick has done an amazing job of using just a few lines to pack his miniature canvas with evocative data.

A perfect example of this is his two of brushes / two of wands. A woman stands at a floor-length window gazing out at a night city. Windows in the skyline across from her glow. Her hands are behind her back. Two brushes, looking more like flaming torches, frame her. This tiny scene does an economic job of communicating the ambition, power and solitary isolation of the two of wands.

An equally stunning card is the paragon of quills / queen of swords. A woman sits alone at a drafting table, headphones over her ears. Darkness is all around her. She is working, alone, at night, at an intellectual task. From these details, we can imagine her entire life story. I've never seen a more evocative depiction of the queen of swords.

Crick's Hanged Man offers a new take on an old, and troubling, theme, that of a hanging human being. Crick depicts him as someone hanging on his knees from a child's swing-set. I got a real sense of fear from his Tower – a good thing, but not so much from the Devil. The Tower card makes fine use of gradations of light and dark, and the image of a human falling from the sky, under lightening. The Devil is a vague, reptilian sketch, with no visible human prey.

Crick is not a believer in any magical quality to Tarot. He designed the deck as an exercise in problem solving, in "trying to capture the meanings of these cards as simply as possible." Crick chose a minimalist format exactly because he does not believe that any magic occurs during a tarot reading. As he put it, "I'm a fairly pragmatic sort of person, and I believe there's real usefulness in getting a reading and thinking about what the cards are saying to you; I believe that what you get is a random set of cards, but that doesn't mean that you can't make something meaningful out of that. I'm interested in Tarot precisely because of this: crafting meaning where there is only randomness is a skill I think we all need to practice."

Crick hopes that querents and readers will use his minimal diagrams to discover their own meanings – to see in them what it is most helpful for them to see.

For me, in some cases, Crick's minimalism went too far. His Fool is excellent – you see the edge of the cliff, and even the sun in the lighter smudge in the upper corner of the card. But there is no little canine companion for this Fool, and I need to see that dog there to feel good about the dive the Fool is about to make. I also wish that his paragon of brushes, or queen of wands, had a cat. I would like to see more passion in the cards dedicated to romantic love: The Lovers and the Two of Cups. Crick was so good at communicating ambition and power in the two of wands with just a few lines – I would have liked to have seen that kind of skill when depicting love with nothing but circles and sticks. His six of cups, about memories of past, pleasant relationships, works well, though: two kids, separated from the viewer, and the present, by a frame, on a see-saw, surrounded by hearts.

In other cases, Crick does a great job of communicating one of a card's meanings, but doesn't capture all of them. In some cases he does – the master of the universe in the two of wands may be content with success, or may be lonely. The World captures the multiple meanings of a card very well – it shows earth as viewed by an Apollo astronaut on the surface of the moon. But Crick's Judgement card conveys only the meaning of being judged, not the meanings of resurrection and reunion, and his five of wands / five of brushes communicates the hostile competition of that card, but not the fun rivalry and self-testing athleticism in can also convey.

In several cards, as with the World card, Crick uses a contemporary touch to boost the card's meaning. For example, his zealot of hearts / knight of cups is a radical in a Volkswagen van. His mentor of brushes / king of wands is a film director. His four of diamonds / four of pentacles is hiding out – in a vault. With his money. Brilliant.