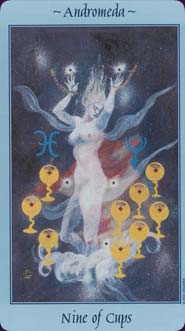 The Celestial Tarot is from the author of the Spiral Tarot, Kay Steventon. The pretty, non-traditional images directly associate astrology, the planets, and the constellations with the 78 Tarot cards. Twenty-two majors are zodiacal constellations and ten planets (Pluto is counted as a planet) of astrology. Each minor suit is associated with an astrological element of fire, earth, air and water. The system includes Golden Dawn decanates, astrology, astronomy, myth and symbolism. Now available with a companion book as well as a standalone deck.


Card Images from the Celestial Tarot 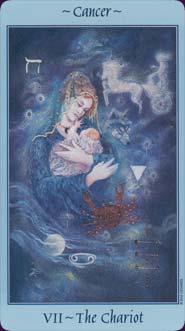 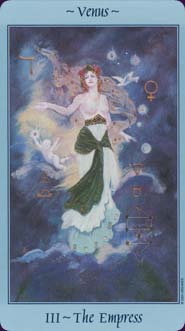 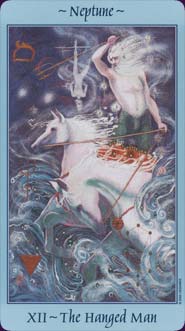 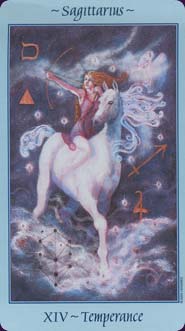 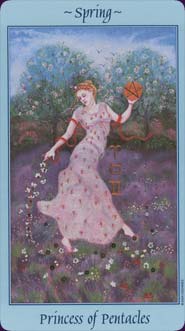 "Embedded in the night sky are archetypal images, symbols, and stories that have enchanted the human soul for aeons." (From "The Celestial Tarot")

Artist/astrologer Kay Steventon and author/lecturer Brian Clark together have created a stunning blend of the myths and symbols of astronomy with the tool of astrological divination. The mysteries that are the Tarot emerge in a very different manner, one that is unique and empowering. It is a guide to the heavens, as well as a guide to our inner selves.

While this deck follows the traditional structure of the Tarot (the Major Arcana retain their traditional titles, with Strength as VIII and Judgment as XI; the suits are Wands, Cups, Swords, and Pentacles; the Court Cards are King, Queen, Prince, and Princess), it is overtly based on the traditions of astronomy, astrology, and mythology.

The twenty-two cards of the Major Arcana are represented by the twelve zodiacal constellations and the ten planets of contemporary astrology. In the Minor Arcana, we encounter what the author terms "extra-zodiacal" constellations. The Minor Arcana us divided into decants, with the thought of adding insight and symbolism to each card. In the Court Cards, the Princesses each embody a season, while the Prince, Queen and King each embody the fixed, mutable, and cardinal signs of each element.

In his introduction, Clark notes that Steventon's work was influenced in part by the works of C.C. Zain and Raphael Binding.

At this point in the journey we meet the Hermit, the Major Arcana card associated with Virgo, the harvest maiden, intertwining the paradoxical themes of fertility and purity. In "Celestial Tarot", she holds the wheat in her left hand and disseminates seeds with her right. This card depicts the season of withdrawal. For psyche the season of the harvest has come, it is time to withdraw to prepare and reflect. In the background is the traditional image of the Hermit holding the lamp of inner guidance necessary during this time. Virgo embodies the wisdom of cycles, a respect for fate and openness to destiny. The Hermit augurs a period of meditation where the inner world is fortified to prepare for a major shift on the life path."

I am sure that you noted here that each card appears as part of a series, part of the journey of individuation that the Tarot is. I liked this aspect of this deck, and felt that it was presented well.

"The Two of Wands: Cetus"

When the Two of Wands is drawn the horizon is alight with numerous possibilities. Although confronted by the sea monster Cetus, a bold vision of he future is implicit in the card. In myth, monsters are guardians of treasure and symbolize what needs to be overcome in order to claim the wealth. A new business venture, academic idea, course of study, or relationship may call the individual to move away from their current routine. The Two of Wands calls us to action. Psychologically the card reminds us that courage and heroism are necessary to move forward."

The Court Cards are presented by title and suit, mode and element, followed by a discussion of the card. From the LWB:

"The Queen Of Pentacles: Fixed Earth

Sovereign of the sensual and pleasurable aspects of life, the Queen crowns herself with the pentacle. As mistress of her resourceful earthy domain, she embodies the incarnate realm and oversees seasonal cycles, intimately knowing the need to sustain and preserve life. At her foot is the bull, emblematic of abundance and fertility as well as the power to enable her to be grounded through difficult passages. Characteristic of a sensual and stable woman, the Queen implies a developing relationship with an internal sense of security and confidence to be in the world. When this card appears it parallels a time of deserving life's rewards and riches."

At the end of the LWB there is a short section on doing readings, along with a presentation of the traditional Celtic Cross spread.

The cards themselves are 2 3/4" by 4 3/5", and made of good quality, coated card stock. the backs of the cards show a light blue, 1/4" border surrounding a deeper blue night sky, replete with stars. It would not be possible to tell if the card had been drawn in the upright or the reversed position.

The artwork is stunning, and strongly carries the character of fantasy. Toss in astrological and elemental symbology, along with Hebrew letters, and this deck rocks! I loved going through the cards and looking for the symbols and the intricate details. The overall tone is a little dark, as far as coloring goes, with deep blue/lavender backgrounds, with imagery in gold, white, lighter lavender, blues and greens, with some bronze/red.

It is very hard for me to pick favorite cards with this deck, as I like so many of them! The Fool certainly stands out: associated with the planet Uranus, the Fool is seen as acting suddenly and unexpectedly. He is shown as a small, naked figure against the night sky, arms up and in an apparent freefall. The lower half of the card appears to be a choppy sea, with the shoulders, head, and upraised arm of a male figure shown in the upper half, against a light lavender background.

The Hermit, associated with Virgo, shows a female figure standing, holding a stalk of wheat in her left hand, while disseminating seeds with her right. She appears to be standing on a cloud. The traditional figure of the Hermit, with upraised lantern, is placed behind her.

The Ace of Wands carries the story of Cassiopeia. She is shown, resting against a light lavender background, contemplating the palm leaves in her right hand.

The Queen of Swords is a daunting character, shown seated on her throne, with an upright sword in her left hand, while her right hand is outstretched, and she appears to be pointing her finger. It also appears that there is a chain of some kind hanging from her right hand, but I have no clue what it is supposed to be. Behind the outstretched right arm we see what appears to be a nude figure against the night sky.

While this is not a deck for beginners, it is a deck for those who want to work with astrological associations, or those who are interested in myth. This deck certainly could be used for readings, but it would also work well for meditation and journeying.