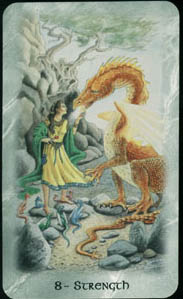 Dragons are the theme of this deck and they appear on every card in the Celtic Dragon Tarot, with or without humans. The scenes are traditional tarot with a few changes - Swords are associated with Fire and Wands with Air. 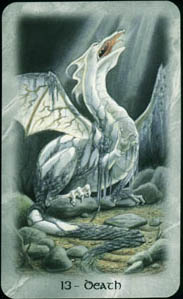 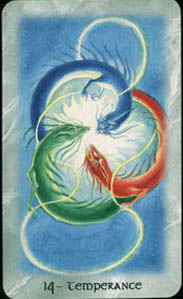 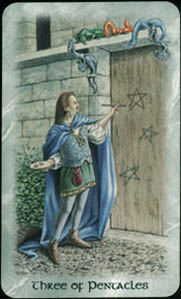 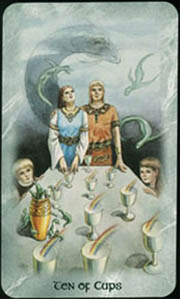 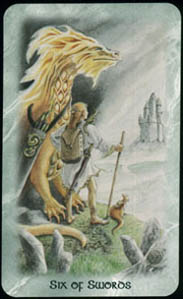 Even though my first deck was the Dragon Tarot, I had originally wanted this one, but I couldn't afford it. I've always been attracted to Dragons, now I work with them personally. The Celtic Dragon Tarot by D.J. Conway and Lisa Hunt (the Shapeshifter Tarot), appealed to me because of the difference in the dragons. There are reds, oranges, yellows, pinks, blues, greens, whites, and blacks, each placed into their elements: Mountains, Forests, Seas and Waters, the Elements, Wind, Storm, Weather, Volcanoes, Fire, Chaos, Light, and Deserts. Combined with the beauty of humans dressed in medieval Celtic clothing, and authentic Celtic landscapes, the dragons look as if they are right at home. New Age symbolism isn't in many of the cards, but ancient Celtic symbolism is. Instead of Devil, card 15 is now Chains, and what was the

Hierophant is now the High Priest. The Sword suit is of the element Fire, and Wands is now the element Air. Out of the entire deck, I would have to say my favorite card is Death.

"A large dragon is shedding its black skin and scales, emerging in a new identity of sparkling white. Its wings are spread in triumph and its head thrown back in a roar as it completes the successful transformation. Out of dark stormy clouds comes a bright beam of sunlight, which illuminates the moment of victory. What was perhaps looked upon as a painful death or great loss has been revealed as a rebirth into something better. Knowledge, willpower, and trust in spirit have helped to create gold out of dross. Like the fabled Phoenix, the dragon rises from the symbolic ashes of an outworn existence or experience into a new and brighter cycle of life."

That is why I like that card, for the dragon is not a skeleton, nor is it dead, it is shedding its skin. There's no way I could have put that into words that would reflect what she has said. The cards are wonderfully powerful, reading just like my first set on the first spread. The book of this deck explains all symbolism used in each card, major and minor. It also has spreads, spells, and meditation techniques for everyday life.

If any other deck doesn't meet your standards, or if you really love dragons and medieval Celtic art, I recommend the Celtic Dragon deck and book. The pictures are powerful, you feel like the dragons are there with you, watching what you're doing. Try it out, and see for yourself why the Celtic Dragon is one of my favorite decks!

My very first deck was the Celtic Dragon Tarot by D.J. Conway and Lisa Hunt. The imagery in the deck is beautiful and somewhat ethereal. I used this deck for 6 years or so before I found the primary deck I use now. But every once in a while, I feel the need to get this deck out and just sit with it or use it.

The dragons are from all cultures, spectrums and Elements, representing the ever present magic that is all around us. The beautiful Celtic symbolism speaks to me on a level that relates to my Irish heritage, while the strong magical elements are not too strong, so the non-practicing person won’t feel threatened. The imagery isn’t too dark, which does a great job of keeping the reading light.

I like how some of the more commonly “dark” images are altered to be more approachable and not so dark. The dragons are not threatening, instead interacting with the humans in the cards in a positive and everyday type way. The “Death” card isn’t necessarily about death as an end, but about death as a part of a cycle, even a new beginning.

The guidebook does an excellent job of explaining the card meanings in great detail, and the layouts and spells to do with the deck are a great reference for all kinds of uses. I love that the book includes a picture of the card in question along with a description of the images and an explanation of what the card stands for. Having a picture to go by is a wonderful help when you are first learning how to use a tarot deck.

For me, I have to say that the aesthetics of the deck are a little hard to work with sometimes. The general size of the deck is a little too big for me to handle sometimes, especially if my hands are tired or sore for some reason. Other than that, the deck is a great joy to use!