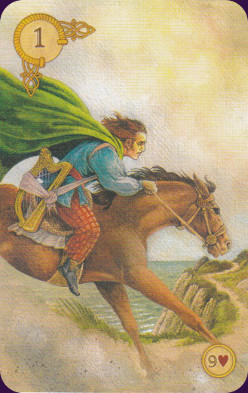 The Celtic Lenormand has 45 stunning cards illustrated by Will Worthington of the DruidCraft Tarot. In addition to the 36 usual Lenormand cards, there are extra cards for both gender balance and to extend the Pagan and Celtic theme.


Card Images from the Celtic Lenormand 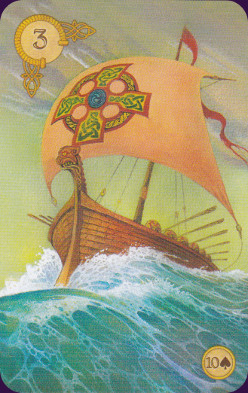 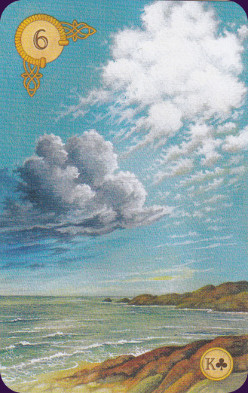 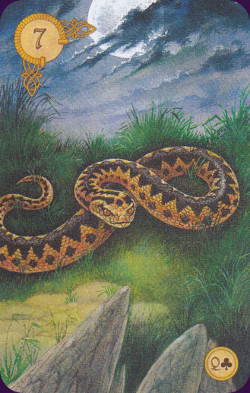 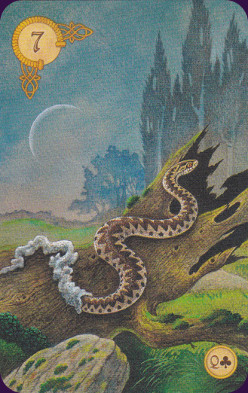 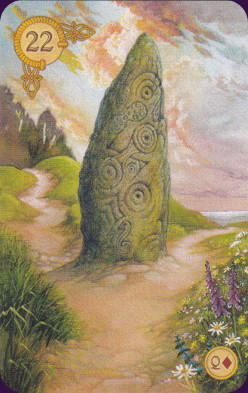 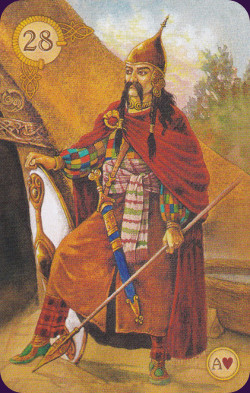 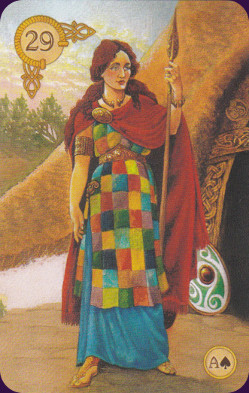 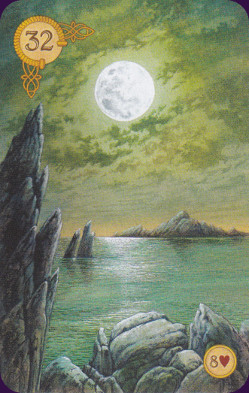 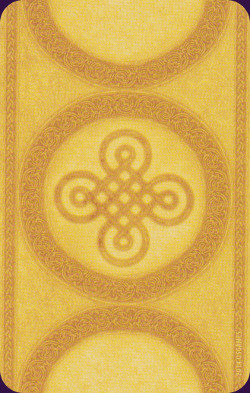 The “Celtic Lenormand” is a 45 card pagan themed Lenormand oracle, which comes with a 187 page companion book. The backdrop for these cards is the landscape of Brittany, in the north of France. The traditional 36-card structure of the Lenormand has been augmented with additional cards: there are two tree cards for the God (the Oak and the Holly), three different Birds cards that reflect the three aspects of the Goddess (Maiden/Mother/Crone), an additional snake card that reflects a more positive, healing, and transformative aspect of snake, a cat card to go along with the dog card, as cats are traditional familiars, and four additional “people” cards that were added for gender balance.

The deck and book come in a sturdy cardboard box with a lift-off top. The inside has an inset for the cards, to make them easy to access. The top of the box features card Number 29, Man, while he back of the box gives information on the cards.

The front cover for the companion book shows card Number 12, Birds (Owls). The introduction talks about this deck bringing the nature-based focus of pagan beliefs into the venue of the Lenormand oracle. The deck can be used as a traditional 36 card deck, or it can be used with the additional cards. The imagery has a distinctive Celtic feel to it, with the symbolism reflecting the pagan path.

The companion book addresses the use of the Lenormand for spiritual, as well as divinatory purposes. McCracken also addresses timing through the eight Sabbats, and to using a range of interpretations (positive and negative) for the cards.

At the end of the book there is information on combining cards, working with deity, using the cards in spells, and several card spreads, including a five card Lines spread, a five card Inner Cross spread, a nine card Mini Tableau, an eight or twelve card Paths spread, Dual and Triple Goddess spreads, a Moon Cycle spread, and a Year Ahead spread.

The cards are 2 Ľ” by 3 ˝”, of sturdy card stock. The backs are a medium yellow, with a darker yellow border on the two long sides, with a darker yellow circle in the middle. They are reversible. The card faces are borderless, with the card number in the upper left hand corner, and the playing card association in the loner right hand corner. The colors are intense, with the imagery nature/pagan oriented.

The following cards are examples of the diversity within this deck:

The image here is of an old, gnarled oak tree, with full green leaves. Keywords include health, roots, and body/mind/spirit.


The image here is of a holly tree with barren branches, covered in snow. At the bottom of the tree we see holly leaves and red holly berries. Keywords include health, roots, body/mind/spirit, and outdoors.


The image here is that of a male figure, on the deck of a boat in open water at night. There is a new moon in a star filled sky. Keywords include guidance, technology, and metastasis.


The imagery here is of mice in a storehouse. Keywords include loss, theft, and pollution.


The image here is that of a golden key sitting on a wooden table. Keywords include certainty, solutions, and mastery.

I found this to be a well done deck, both the text and the imagery. The association with pagan imagery and symbology is carried out nicely. This deck can be read as a traditional 36 card Lenormand, or with the additional cards. The purpose and intent for this theme does not disappoint!

The Celtic Lenormand is an innovative new deck from US Games. It gives Lenormand users and/or Pagans the opportunity to use the cards in a ritual setting, as well as for divinatory purposes. While it has been widely noted that Lenormand decks operate on facts rather than intuition – the Celtic Lenormand deck moves the Lenormand tradition firmly into the realms of the mystical. Additional cards make this a deck that will delight Pagans, as they round out the fundamentals of Pagan belief without the necessity of substituting cards to represent Pagan ideals.

The symbolism in this deck, while remaining true to the Lenormand tradition, also represents important factors of Pagan ways and beliefs. There are three Bird cards – Songbirds, Chickens, and Owls – which represent aspects of the triple Goddess in her guises of Maid, Mother, and Crone. There are two Tree cards – the oak and the holly which not surprisingly represent the Woodland God in his incarnations as the Oak King and the Holly King. There are two Snake cards which offer differing views of the snake – one a traditionally aggressive snake, the other a snake shedding its skin by the light of the moon, more representative of renewal and transformation. There is a Cat card to be used with or instead of the Dog card – both representing different types of friendship and loyalty.

There are four extra people cards – a female Rider, a female Child, and a Lord, and Lady card (in addition to the standard Man and Woman cards). All these cards can be used for a variety of purposes such as gender specific identification, same-sex relationships, or when many people are involved in a situation.

Other cards have been designated to represent the eight Pagan sabbats or the Wheel of the Year; and every card is aligned with several deities both Celtic, and from a broad spectrum of world cultures. This is intended to add Pagan spiritual dimensions to a reading.

This 45 card deck measures 50 x 90 mm which makes it a little smaller than regular playing cards. The card stock is excellent – sturdy yet flexible with a smooth low sheen finish. These cards fit nicely into the hands, though if you have big paws you may find them to be a little fiddly. The Celtic Lenormand Is a very responsive deck and shuffles easily.

The print quality is superb, with the tiny details and textures of the artwork being easily discerned. The art itself appears to be a mix of watercolours and ink, and done with a professional hand. The attention to fine detail, and the subtlety of the artist's palette is wonderful. The artist, Will Worthington paints in a entirely natural colour scheme, though not surprisingly the images are somewhat idealised.

The cards have no titles, simply a number (in a frame) at the top left-hand corner, and their playing card association (in a smaller frame) at the bottom right corner.The images have no borders. The print on the back of the cards is beautiful Celtic knotwork in shades of yellow and golden brown.

The cards and guidebook come packaged in a small solid cardboard box with a liftoff lid. The box is printed with images from the deck, and information about it. This box set is sturdy enough to travel and will fit easily into a backpack or handbag.

The 188 page guidebook is compact, and overflowing with vital information. A brief Introduction is followed by details regarding the Pagan theme of the deck. This includes chapters on Celtic deities, the additional cards in the deck, Lenormand spiritual traditions, the Pagan year, dark and light aspects of each card, and affirmations. Each card has its own mini chapter with Keywords, Timing, Person, Playing Card Association, Description, Meanings, Spiritual Readings, Dark and Light, Spell Use, Affirmation, Deity. Deity is a list of gods and goddesses from around the world these qualities are represented and aligned with the card.

While purists may argue that the Celtic Lenormand has moved beyond being a genuine Lenormand deck, I would suggest that like all other divinatory systems, Lenormand cards must evolve or become irrelevant. Building on tradition, while acknowledging the complexity of our current lives and society, and adapting accordingly is what we humans do best.

The Celtic Lenormand deck is a game changer. It is beautiful to look at, and visionary in its scope. If you want to experience the new face of the Lenormand system – this is it. This deck is flexible in that extra cards can be removed to make it a fully functional 'regular ' Lenormand deck, or they can be left in to add new dimensions to a reading.

I would recommend this deck to anyone who is looking for a new and exciting Lenormand deck.