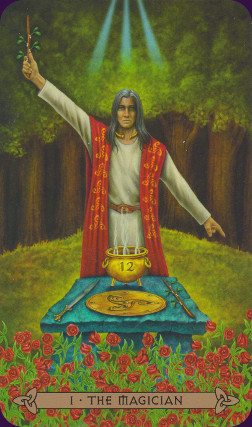 The Celtic Tarot is a 78-card deck steeped in Celtic tradition and mythology, by Kristoffer Hughes, a native of Wales and member of the Order of Bards, Ovates and Druids. It's a thorough and detailed deck suitable for beginners as well as more advanced readers.


Card Images from the Celtic Tarot 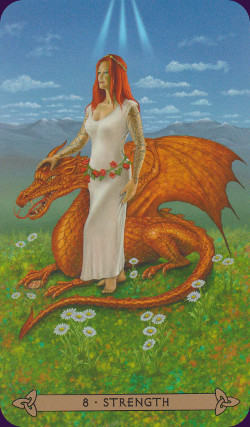 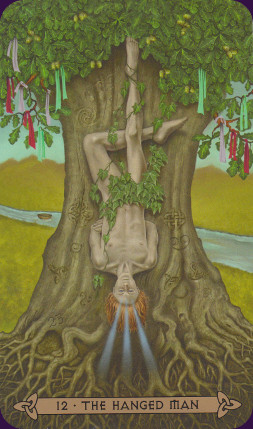 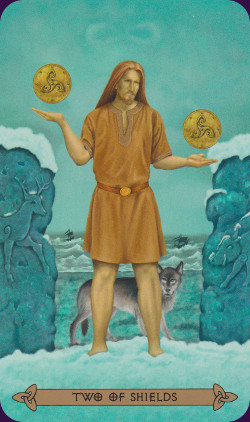 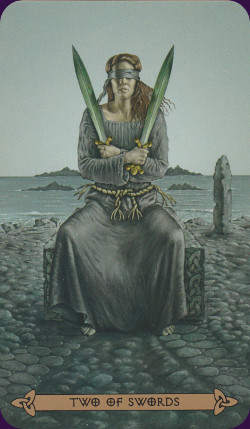 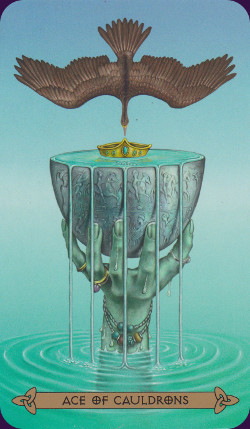 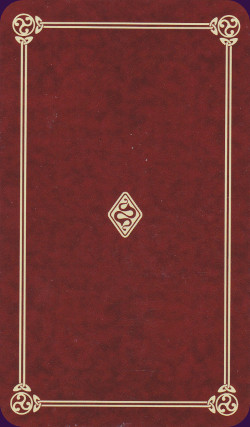 With its complex mythology and elegant artwork the Celtic culture has long been a favourite subject for tarot deck creators, with quite a number of oracle and tarot decks based on Celtic beliefs preceding this new Celtic Tarot.

Although Celts are largely identified with six nations within the British Isles and Ireland (Brittany, Ireland, Scotland, Wales, the Isle of Man, Cornwall) they also spread into parts of Europe, notably northern Portugal and Galicia. They are officially defined and identified not through genealogy but through the use of Celtic languages, which at this point precludes any European self-identified groups calling themselves Celts. As a cultural group their creation of a powerful identity has been forged through unique art forms such as the richly symbolic and complex knot work, stylised depictions of the natural world, unique and beautiful jewellery. They have left their mark on mysterious monuments – standing stones and rock carvings. And their legacy continues today in Celtic revival music which has evolved out of the folk music of the Celts and features both distinctive construct and content.

Celtic mythology varied somewhat between language groups however experts divide Celtic mythology into two distinct groups; those based on Irish myths and those based on Welsh myths. Other Celtic nations developed distinct localised variations which may have incorporated deities from pre-existing cultures and belief systems. The earliest of these myths tell the stories of relationships and deeds of ancient gods, provide explanations for natural phenomena, embody social interests and events, detail the interactions between gods and men, and later tell the stories of an age of heroes. Kristoffer Hughes is a native of Wales, Chief of the Anglesey Druid Order and also a member of the Order of Bards, Ovates and Druids putting him in a knowledgeable and prime position to have developed a tarot deck steeped in Celtic tradition and mythology. And, given his background it's no surprise then that the Celtic Tarot focuses on the Welsh branch of Celtic mythology.

This is a 78 card, fully illustrated tarot. It has 22 Major Arcana cards, and 56 Minor Arcana cards divided into four suits – Wands, Cauldrons, Shields, and Swords. Each suit has 10 number cards and 4 Court cards, a King, Queen, Knight, and Page. Many of the Major Arcana have been renamed: The Empress is now The Mother, The Emperor is renamed The Father, The Hierophant is renamed The Druid, The Hermit is now The Merlin, Temperance has been renamed Equilibrium, The Devil is The Shadow, and Judgement has been retitled Rebirth.

The cards measure 70 x 118 mm – this makes them a fairly average size tarot deck. The card stock is quite light and thin making it very flexible. Given this lack of density the cards may be vulnerable to sustaining damage, particularly if you are heavy-handed when you shuffle or deal the cards. The finish on the cards is low sheen and smooth making them easy to shuffle and handle. The print quality is very good, with clear and crisp images, no misprints, no blurriness or colour bleeds.

Artist Chris Down has used a broad, natural palette for the most part and the way he handles colours has imbued his illustrations with a glowing, otherworldly quality. Some colours in particular seem to dominate the deck – deep blues, rich teals, both light and deep browns, luminous aquatic blue, forest green; and features highlights in fiery oranges and reds, purple and, golden yellow. Chris Down has not attempted to illustrate this deck in classic Celtic style but instead opts for more reality-based images highlighted with artistic flourishes. Both humans and deities alike appear as flesh and blood, animals are depicted with realistic detail, while dragons (of which there are many) are given a more stylised, but nonetheless charming appearance. The artwork has all the hallmarks of digital creation – sharp outlines, smooth surfaces, and the tell-tale blurriness that can wash over some details. However, these are attractive and carefully constructed images, with characters and places given unique features and appropriate expressions for the stories they are telling.

The illustrations reach to the edge of the cards, there are no borders. The numbers and titles of the cards are given in black, on a gold banner at the bottom of the image. The design on the back is elegant, symmetrical, and reversible – a burgundy background featuring a pale- yellow frame with simple Celtic flourishes in the corners, and plain diamond design in the centre.

The cards come packaged in a solid cardboard box with a fold back lid, which is held shut with magnetic clasps. The cards are seated in a tan cardboard well in the centre of the box, with the guidebook seated atop them. A black satin ribbon wraps around both the card and the book to facilitate easy removal from the box. The box has a glossy finish and is detailed with fine black and grey Celtic knot work; it features images from the Celtic tarot deck, as well as providing information about the cards, and publishers details. This box set can be dropped into a backpack or tote bag for easy transportation, the box is sturdy enough to protect the book and cards within it, however heavy or careless handling will eventually result in permanent damage to the box.

The hefty guidebook is printed on 328 pages of heavy, glossy paper, written by the Celtic Tarot’s conceptual originator, Kristoffer Hughes. The Introduction outlines the author’s introduction to tarot and his developing relationship with it. This is followed by a short chapter titled The Art of Divination, which defines what the tarot is and how it works. This is followed by further brief chapters on the history of the tarot, who the Celts were, the structure of the tarot, the foundations of the Celtic Tarot – specifically the RWS system, Kabbalah, and Celtic mythology. The chapter entitled The Tree of Tradition links together The Tree of Life and Celtic ‘tree magic’ as well as basic numerology, and The Fool's Journey. How to Use the Tarot is a detailed chapter which gets down to the nitty-gritty of the structure of the deck - structural correspondences such as suit symbols, and numerological alignments. This is followed by instruction on reading the cards for yourself and others, including some excellent advice on phrasing questions, using common sense, humility, and respect for the cards.

The chapter entitled The Major Arcana is divided into four sections. The Fool is defined as a separate entity from the rest of the Major Arcana. The remainder of the Major Arcana is divided into three sections – the Roots which runs from the Magician to The Chariot; The Trunk which runs from Strength to Equilibrium; and Branches which runs from The Shadow to The World. Each card has its own four-page mini chapter which features a double sized full-colour reproduction of the illustration. This is accompanied by a two-line verse which describes the essence of the card, beneath which is a statement which gives insight into the divinatory meaning, and keywords provide prompts which also describe the card’s interpretation. A dialogue follows in which the card addresses the Seeker directly, this is the voice of the deity, mythical being, or symbol depicted on the card. The divinatory meanings which are given are quite in-depth and as with all thorough tarot books addresses the ways in which the Seeker may experience this in their life. These divinatory meetings are fairly standard and offer no radical departure from generally accepted interpretations. It should be noted that this book is aimed at the tarot novice, so it does not presume a prior knowledge, and in some respects the information given is simplified.

The Minor Arcana cards are given slightly shorter chapters but still have the large full-colour illustrations, keywords, a description of the illustration and detailed divinatory meanings. The book closes with a chapter on Tarot Spreads which has a Celtic Cross layout, the 4-card Triskele spread, and a 9-card Relationship spread.

If you are looking for a thorough and detailed Celtic tarot which eschews twee faux-Celticism and looks instead for strong connections between Celtic mythology and the tarot then this is a wonderful deck. If you are looking for a deck based on Celtic, particularly Welsh mythology than the Celtic tarot may be right up your alley. The Celtic Tarot may have strong appeal to fans of fantasy fiction, particularly Game of Thrones (both TV and novels). While I am a traditionalist regarding novices learning tarot and recommend that they start with the Waite-Smith deck, the Celtic Tarot is geared towards the novice learner, making it easy for a newcomer to use this particular deck. All in all a beautiful, and well researched deck.