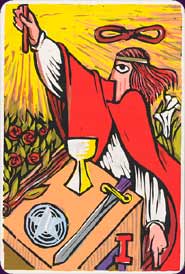 
Card Images from the Tarot Chesta 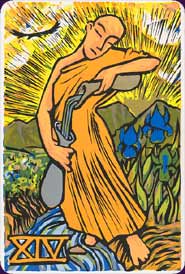 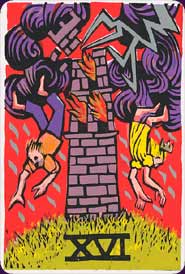 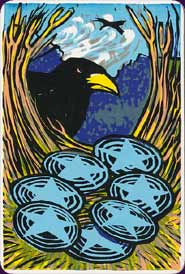 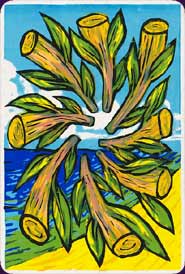 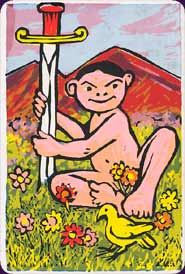 Tarot Chesta is a limited edition of only 61 tarot sets, named after its creator, Chester Harris. Creating these cards has been a hands-on experience for Chester, as he has been involved with the cards at every stage of their development. In his words, he did everything but make the cardboard and grind the pigments for the paint.

Chester created the original images as linocuts over two and a half years, while on a journey around Australia. He then returned home and spent four months screen-printing six or more colours onto the cards, finally printing the black imprint of the lino carving over the top.

This individual process gives the cards far more texture and tactile feel than a usual printed card, and they are larger, too. Measuring more than 10cm x 15cm, they are among the largest cards I've handled (only the Lovers Tarot is bigger). The size and artistic method make the cards difficult to shuffle normally, but the handcrafted nature of this set means it should be handled and treated with special care anyway.

The tarot imagery is based on the Rider-Waite-Smith, but with a bold and colourful personal flavour. The card for Temperance makes the furthest departure from the RWS symbology, showing a Vietnamese bodhisattva, Quan 'am, who is also a goddess of compassion. To Chester, her story and qualities fit the Temperance card better than any other image.

The court cards have also been updated slightly, and the genders equalised. The Pages are children and the Knights of Cups and Pentacles are women. The courts are also differentiated by the age of the person and the season on the card, from Page to King and spring to winter.

A stapled companion booklet is provided, which offers a verse of prose for each card, explaining and thought-provoking. There is also a two-page introduction to the deck and the artist's influences. The packaging of the set is personalised: the cards are wrapped in a silk scarf and placed into a wooden box, each of which are unique and have been crafted without glue or nails.

While the cards are suitable for beginner to advanced readers, the price tag puts the set out of the reach of all but the keenest enthusiast. The Tarot Chesta is most suitable as a collector's item or as a special gift.