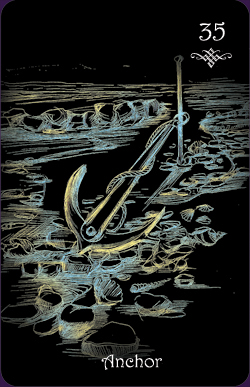 The Clair de Lune Lenormand is an atmospheric 38-card deck, designed to give the feeling of being under the moonlight. The detailed and realistic illustrations were created using etching, and appear as yellow and blue line drawings on black backgrounds. It's a traditional Lenormand deck, and also includes extra Man and Lady cards. 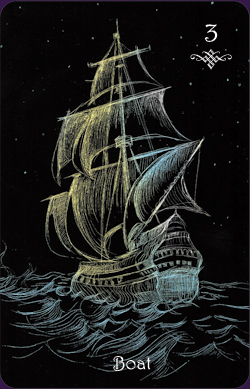 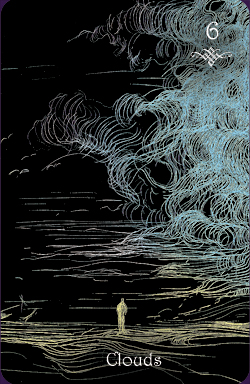 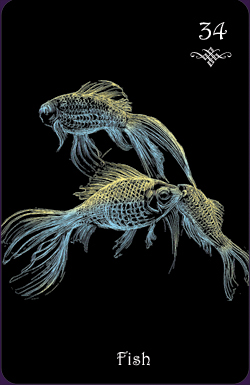 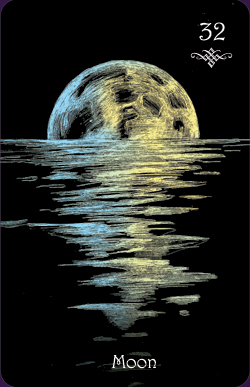 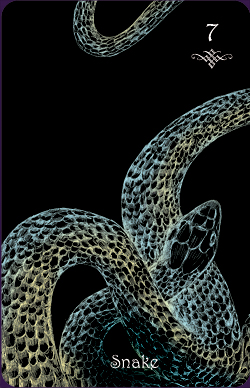 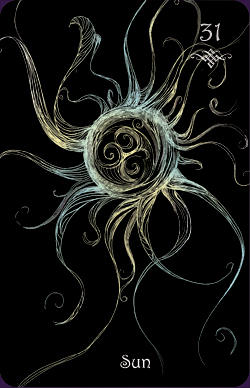 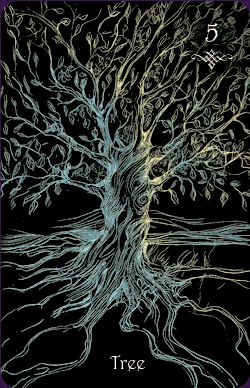 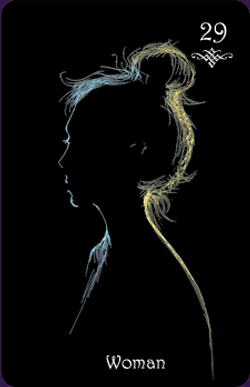 The pale light of the moon creates a world of illusions and mystery - shadows hide things that we can easily discern by day. By moonlight it becomes more difficult to distinguish phantoms from reality and our imaginations are susceptible to wild flights of fantasy. Folklore and legend tell us that the moonlight is magic, and those adept at using magic are most active beneath the rays of the silvery moon. Even the most mundane objects are transformed into the unfamiliar, or take on a sinister cast. But then again some creatures flourish and their peculiar beauty only becomes apparent in the moonlight.

The cards measure 57 x 88 mm, this makes them a fairly average sized Lenormand deck, a little smaller than regular playing cards, and considerably smaller than standard tarot and oracle cards. The card stock is excellent, being light yet sturdy and flexible, with a low sheen, smooth finish. Being as compact as they are, these cards fit nicely into one's hands and are easy to handle and shuffle. The print quality is outstanding with the illustration details and subtle waves of colour being reproduced precisely. There are no misprints, no blurry images, no colour bleeds – which given the nature of these unusual illustrations would be nothing short of disastrous.

The illustrations are finely wrought and demonstrate a masterful, artistic hand in their creation. Done on black scratch paper over shades of pale yellow and China blue which captures the glow of the full moon’s light, these delicate artworks are truly beautiful. The artist, Ana Tourian, has created an unusual deck in that all the people and events are part of the same world. Frequently divination decks feature illustrations that move from place to place rather than create a sense of continuity by placing events in the same setting, however the Clair De Lune Lenormand deck is set in a continuous landscape can't help but remind one of fairytales.

There are no borders to these images, nor are the usual Lenormand correspondences given on the cards. The number of each card is given in the top right hand corner in elegant white script, and the title of each card is given beneath the image in a delicate white font. The image on the back of the cards is a scratch illustration of the moon in blue and yellow.

The cards come packaged in a small matte black tin - the title of the deck and the same illustration of the moon from the back of the cards, on the front. The cards sit on a red felt base which protects the deck, and are accompanied by a foldout pamphlet/guidebook.

The instructions include information about the artist, as well as information about the deck. The artist/author thoughtfully includes a resource list of videos and books which will further a keen Seeker’s knowledge. Also included is a brief outline of how Leormand decks function, and while it is succinct it is also incredibly precise. Each card is given a divinatory meaning which consists of up to a dozen keywords. This is enough quality information to enable a novice start reading Lenormand cards for themselves.

The Clair De Lune Lenormand deck is absolutely stunning – the illustrations are simple yet magical. If you are something of a night owl, or love fairytales and lunar magic, or have gothic inclinations then you really need to own this deck. If you are looking for a set of Lenormand cards which has a unique twist yet maintains the integrity of the classic deck then the Clair De Lune Lenormand is just the right deck for you. No matter which way you cut it if you are a Lenormand card user then this deck is a must see (and probably must have).

The Clair de Lune Lenormand is a 38 card Lenormand deck that follows the traditional 36 card Lenormand structure, while adding a second version of both the Man and Woman cards (one version if a side view, the other is facing forward). The background is black, with the images etched as line drawings in blue and yellow, giving the impression of being in the light of the moon. The black background, and minimalist but detailed imagery is what drew me to this deck. I am most definitely a night person! The cards and accompanying companion booklet come in a lovely black metal box, with red felt on the inside bottom. It came wrapped with a beautiful blue bow – quite elegant!

The companion booklet is of good quality stock paper, antique looking, with a lightly colored line drawing style background. It is 18 pages, done in fold out style, consisting of an introduction, commentary on the deck, a bio, and a presentation of each of the cards, including a small scan of the card, along with keywords/meanings. The cover shows a scan of the Rider.

In her introduction, Tourian talks about the Lenormand system being non-esoteric in nature. She notes that the images in the Lenormand are taken from everyday life, and speak to the essence of the question or issue at hand. She states that each card carries a very direct message, not one that is interpreted by the reader. The cards are read in combination, and not singly. Tourian recommends that the reader begin their journey into the Lenormand by doing daily two card combinations that answer basic questions, and give a general view of the day. For more advanced readings, Tourian recommends the Grand Tableau.

In her section about the deck itself, we find that the deck is true to the Lenormand tradition, with 36 cards (note: there are two optional/extra cards, one for Man, and one for Woman, making a total of 38 cards), and symbols that stand true to the system (House, Rider, Man,Woman etc.). Tourian goes on to state that the elements and subjects within the cards have been placed within the context of a common setting – the light of a full moon. Her aim was to create the qualities of mystery and fairy tale within these cards – I feel that this was accomplished admirably! Tourian has also included resources for reading the Lenormand, including videos and books.

The cards are 2.25" x 3.5", with a black background front and back. There is a beautiful circular image on the card back, with the card front showing the card number in the top right hand corner, and the card title centered across the bottom. The image fills the card – there is no border. The artwork is done in a technique termed etching, which was then transferred to the computer and digitally colored.

I don’t often work with the Lenormand, but I love this deck. I am strongly considering adding it to my All Hallow’s Eve reading this year! It is a deck that keeps its promise to add a bit of mystery and fairy tale quality to readings.