The Cook's Tarot: Dining with the Major Arcana is a set of 22 double-sided, large cards that beautifully combine tarot with food. Each card sets the scene for dinner with the major arcana's character, and provides a symbolically linked recipe as well. Now available in a full 78-card edition.


Card Images from the Cook's Tarot 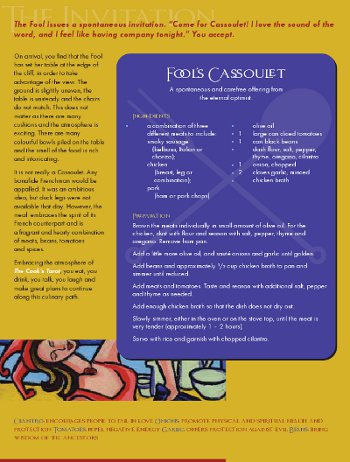 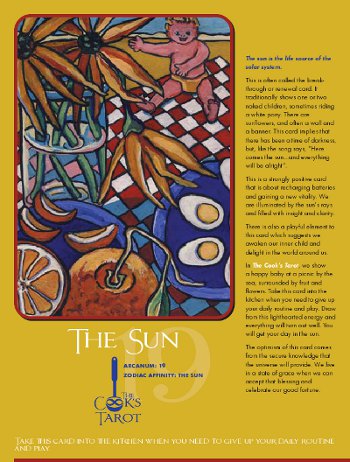 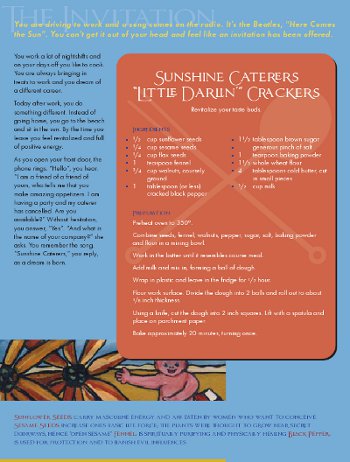 The Cook’s Tarot: Dining with the Major Arcana is a wonderful blend of cooking and tarot, designed to bring awareness into the preparation and serving of food and enrich one’s daily life. It’s the first deck from Canadian sisters, Judith Stirt and Nancy Boyes.

There are 22 double-sided over-sized cards - big enough to use in the kitchen - with an original tarot painting on the front, along with a description of the image and an interpretation that beautifully links the traditional tarot meaning with the language of cooking. For example, in the Fool:

“In the Cook’s Tarot, our Fool is seen as a young woman, dressed in a completely impractical outfit, dancing in the kitchen. She is joyful, enthusiastic, and happily oblivious to the possibility of failure. Our Fool is not concerned with formal recipes, accurate measurement, or any advanced preparations. She is not afraid, perhaps because she has the confidence of youth. And she has not yet learned consequences.

This is a beautiful card to take into the kitchen when you want the joy of cooking without the fear of failure. You will make a dish that just can’t go wrong. The only thing you will need to be wary of is carelessness. The fool’s downfall. So pay attention and don’t let the rice burn. Chop the veggies carefully and be in tune with the seasoning.

This card is about combining flavours and textures to create a wholesome, hearty and sensuous offering.”

The back side of the card has some very workable and delicious-sounding recipes with which to feed your soul. The recipes haven’t been shoe-horned to fit the tarot meaning; they are wonderful gustatory illustrations of the tarot card through food, with ingredients that have been chosen for their symbolism that matches the card’s energy. There’s the Fool’s Cassoulet and the High Priestess’s Moonlight Mussels, and naturally a pizza is linked with the Wheel of Fortune.

There is a full scenario built around each recipe; as though you’d been invited to dinner with the Hanged Man or Temperance or The Devil – “Your boss, who thinks of himself as a ‘handsome’ devil, has invited you to dinner at the best restaurant in town. You will be discussing the terms of your promotion.” You’re told of the circumstances of the dinner, the people there, the atmosphere, and even the traditional associations of the food and how they link with the recipe and tarot card.

There is one thing that could be improved – the A5 cards have no holder or box once taken out of the plastic wrap. As they’re not reading cards, have the set spiral-bound would be an easy way to keep them together. (This is only the first release of cards though – the complete series of 78 is in progress.)

The Cook’s Tarot is a carefully researched and absolutely delightful set of tarot cards. Even if you’re not much in the kitchen, you’ll want this set just for the sheer fun of the cards and the new ways it will make you think about tarot. Who would ever have expected to be invited to dine with the Magician?