The Corneal Edema Tarot is an art tarot celebrating the gothic lifestyle. The images are composed of posed photographs, graphically edited to embed them into a textured space. The 22 majors have now been published in a limited edition of 50 decks. 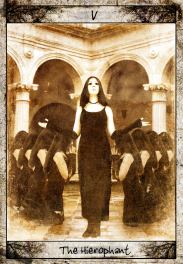 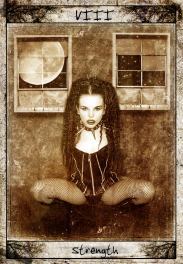 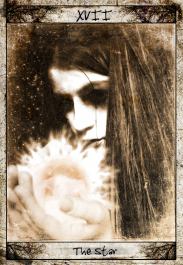 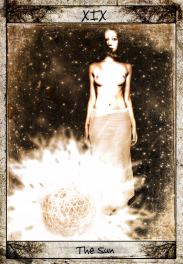 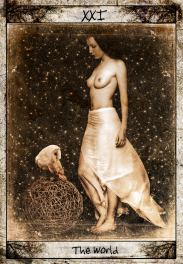 I opened the box and looked and it just seemed so cold, flat. I put it away.

Picked it up later – well of course this deck comes off as cold. But it is not flat. And it does not lack emotion – it is distant, reserved...at first.

The Corneal Edema (Yeah I know it’s a funky name – think ‘eye-sore’) is done in what I would refer to as ‘scratched sepia-tone’ photo-collage.

However the illustrations are not static; they are like frames from an old movie – captured motion – and that is very cool. Old, scratched, faded, blurred…like the film in “The Ring.”

The only real ‘color’ in the deck appears in on XIII Death.

There are only two male figures in The Corneal Edema Tarot, one in The Emperor, and the other in The Lovers. It is not however to be taken as a feminine, or feminist deck

This deck oozes power. And to me, it is a dualistic power.

It is stylized, tasteful, semi-Goth. It is dark without being disturbing. The Hanged Woman hangs from her neck rather than her feet, The Fool gazes into a darkened arched doorway, skulls grace the threshold, – she looks pensive and winsome. The Hermit is the most wonderful hermit I’ve seen in a long time.

I love the Hierophant being depicted as a woman, and The Devil works on so many levels of interpretation (this is perhaps the most disturbing Devil I’ve ever seen).

The more I played with this Major’s only deck with English/American sequencing the more I like it.

For a dark, or Goth deck – it is accessible. That’s an important feature that should not be overlooked.

John R. Dybowski did a couple unusual things here in the Corneal Edema Tarot. He understood the ‘scratched sepia-tone’ medium, and incorporated a really excellent sense of not only classic composition theory into each frame – but then added small elements to shift the comfort level slightly, things the eye won’t pick up.

This is not a super slick computer graphics kind of deck. This is art. This is Tarot. It’s dark. It’s unforgiving. It is a really nice piece of work.

There is one very serious issue with this deck though that must be pointed out. There were only 100 copies printed. And you can’t have mine…