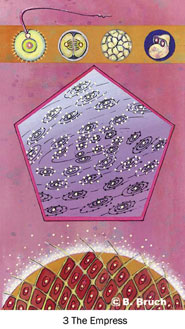 The Tarot of Cosmic Consciousness has 78 abstract, colourful cards that explore tarot's relationship with sacred geometry, Qabala and astrology. The deck is designed to help the user find their way to spiritual self-transformation and healing.


Card Images from the Tarot of Cosmic Consciousness 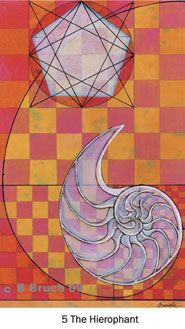 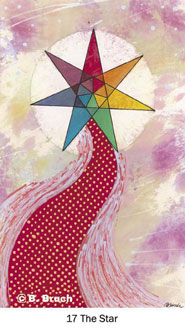 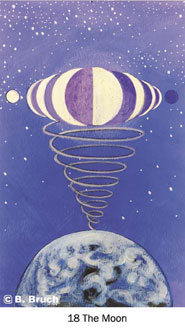 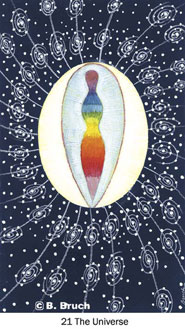 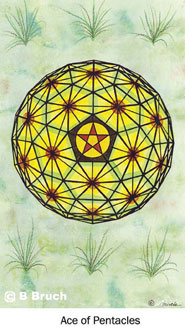 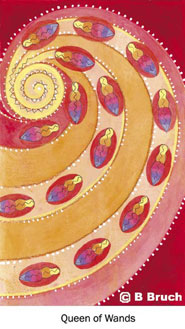 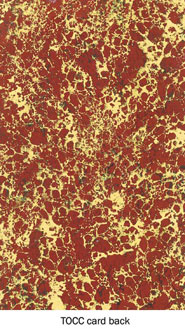 The Tarot of Cosmic Consciousness is a self-published deck and book set both created and illustrated by Barbara Bruch. The set comes packaged in a flat box measuring approximately 35 cm x 20 cm x 3cm. Inside there is a companion book and underneath are two compartments with half the cards contained in each.

The cards themselves measure 7.6 cm x 12.8 cm, slightly larger than most standard sized tarot decks. They are printed on a relatively thin but sturdy card stock and are lightly laminated with a lovely matte finish. They shuffle nicely. The backs of the cards are borderless and show a mottled pattern of rust red and yellow. They are not technically reversible. The fronts of the cards have a thin white border around the images with the card titles in a standard typeface at the bottom of each card. Both the number cards of the Minor Arcana and the Major Arcana cards use Arabic numerals on the titles. The Major Arcana uses the same titles as the Waite-Smith deck with the exception of number 12 which is ‘The Hanged Person’ and number 21 which is ‘The Universe’. Strength is at number 8 and Justice is number 11.

The style of art is quite unique. In her companion book, the author states: “The art in Tarot of Cosmic Consciousness is created by using geometric forms to represent abstract metaphors symbolizing creative processes of self-perpetuating systems.”

The artist has painted imagery based on Sacred Geometry and also includes astrological and Qabalistic symbolism. There are no human or animal figures on any of the cards. The Major Arcana contain some very interesting and appealing imagery. While they are quite unlike the imagery in both traditional and modern decks there are some similarities which are interesting to examine. In the companion book the author includes notes on her choice of imagery in the ‘Traditional Meaning’ section of each card.

The Strength card shows seven spinning wheels representing the chakras. The Devil has a deep blue background with a swirling tornado emanating from a black hole. At the top of the spiral we can see many more spirals in gold. Judgement (spelt Judgment) shows a pyramid with a pentagonal opening from which many red circles seem to be flowing.

The Minor Arcana suits are titled Wands, Cups, Swords and Pentacles and are attributed to the elements Fire, Water, Air and Earth respectively. The suit of Wands is predominantly orange and Red. Wands are arranged around different geometric shapes depending on the number of the card. The Cups suit is predominantly pale blue backgrounds with orange cups arranged in mostly circular patterns. The Swords are a combination of deep blue with pale blue and white. Again, the swords are arranged in a variety of patterns. The Pentacles suit has a pale green background with tufts of grass which seem to have been drawn using oil pastels or pencils. Each card shows the Arabic numeral with Pentacles arranged around it. The court cards for all suits show a range of geometric patterns. In the companion book there is a paragraph to explain the meanings of each card but unfortunately there is no text to explain the choice of symbolism which I feel is a shame, especially for the Courts.

The companion book is a hefty 231 pages and somewhat resembles a textbook. It contains a large number of tables, diagrams, card images and illustrations. I was initially excited to see chapters covering ‘Tarot Yesterday and Today’, ‘Tarot in Relation to Astrology’, ‘Tarot in Relationship to Qabbalah’ and ‘Tarot and Sacred Geometry’. As I began reading the book I started to have some reservations.

In Chapter One the author gives an incredibly brief outline of the history of tarot before arriving at the time of the Rider-Waite deck in 1910. Even in this short section I managed to identify quite a number of errors. Further on she discusses links to Egypt and other tarot myths and makes some rather speculative connections. There is no mention of the Golden Dawn anywhere in the section on ‘Tarot Yesterday and Today’ and yet many of her later associations are clearly based on the Golden Dawn material.

In the section on Astrology the author gives details of the system of associating planets to each of the 36 decans and includes a diagram. She uses both ancient and modern planets and a system known as the Oriental system. Later in the chapter discussing the Minor Arcana she asks us to refer back to that diagram but then goes on to list each minor arcana card with a different planet and sign correspondence, based on the Chaldean decan system. These attributions are taken directly from the Golden Dawn system, and yet again, no mention is made of either the Golden Dawn or Book T.

While I don’t claim to be an expert on Qabala I have to admit to feeling uneasy about the authors claims in the introduction that while she was researching the sacred rites of the ancient Egyptian Goddess Hathor, among other things, that she connected and defined a correlation between Tarot and the Qabala. Remarkably these are identical to those defined by the Golden Dawn!

The book includes black and white scans of the cards and information about their meanings. The minor arcana and courts have one paragraph only. The Major Arcana has three sections for each card which are ‘Meaning’, ‘Reversed’, and ‘Traditional Meaning’. In the latter section it appears that ‘Traditional’ refers primarily to modern decks such as the Waite-Smith rather than historical decks like the Tarot de Marseille.

So while the book appears to contain vast amounts of interesting information I feel as if the author has detailed her own personal ideas and connections and yet is stating these as facts. To me, there appear to be far too many errors for this to be considered a scholarly work and some of the content could be misleading for those who are not able to identify the factual errors. With so much accurate information now available about tarot history, it is unforgivable to me to include errors that reflect a lack of research. Also, it seems inappropriate to base a tarot deck on a system developed by the Golden Dawn and yet not give credit for those ideas.

Overall I rather like the imagery of the cards, and their fresh approach to tarot. I enjoy seeing decks that are not bound by the modern Waite-Smith formula, and I have no doubt that the cards could be used well for intuitive readings, meditation and personal –growth work. For those readers like myself who enjoy working with non-scenic pip cards this deck may also suit, and for experienced tarotists who enjoy using and studying decks with different systems this set may provide new insights.

Unfortunately, I can not be so complementary about the book. I am reluctant to recommend the set for beginners purely because I feel the companion book contains too many errors, and may provide an unsound base for a beginner to build their tarot knowledge upon. If you buy the set, my advice would be to enjoy the cards but approach the book with caution.