The Cosmic Slumber Tarot has 80 cards drawn by comic book artist Tillie Walden, embodying the strange world of dreams where everything magical and improbable becomes possible. It's an energetic and vibrant deck with positive and welcoming vibe. 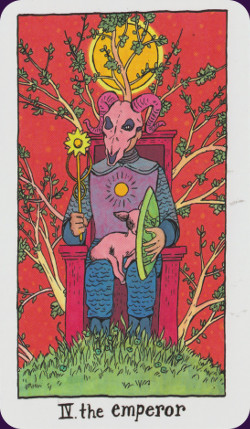 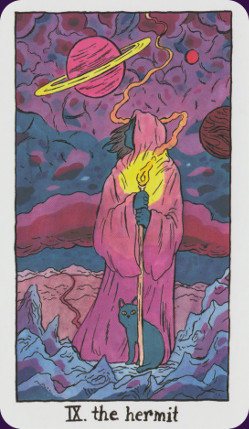 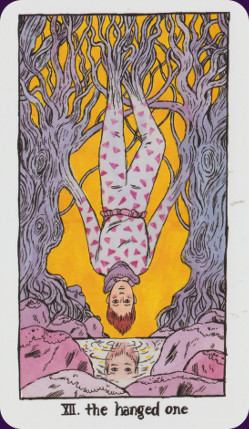 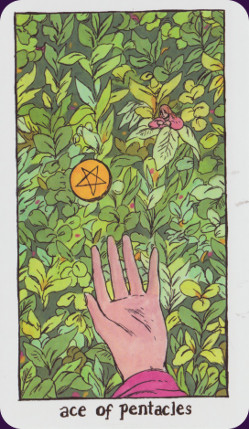 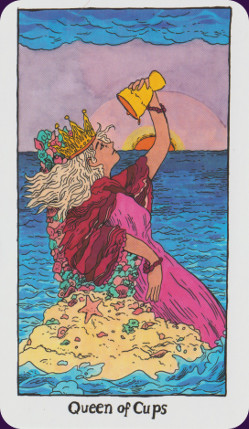 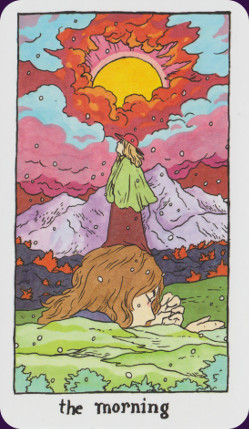 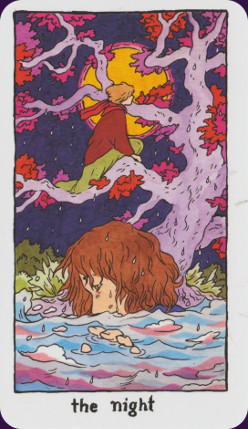 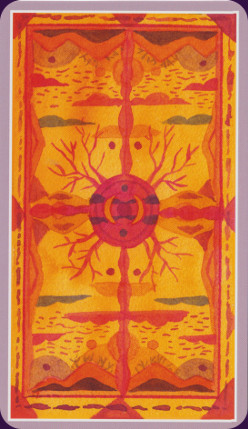 The Cosmic Slumber Tarot is an energetic and youthful deck created and illustrated by comic book artist Tillie Walden. The idea behind this deck is that dreams are a strange place that we accept without question and where the impossible becomes possible. While our slumbers are often peaceful and take us to magical places they are also a roadmap with a rich assortment of signs and symbols, that can be ominous or delightful. Our dreams are a place where pure messages are delivered without the interference of the ‘logic’ of our waking lives or the interference of the relentless visual media and messages which we are daily bombarded with.

This is an 80 card fully illustrated deck – it has 22 Major Arcana and 56 Minor Arcana, with an addition of two clarifying cards, The Morning and The Night. For the most part The Cosmic Slumber Tarot follows the structure and visual representations of the Rider Waite Smith Tarot – with the Major Arcana cards having more complex and ‘denser’ illustration and the Minor Arcana being somewhat sparer in detail.

The Major Arcana has no radically renamed cards, however The Magician is titled The Magus, a name not often found in tarot decks these days, and The World is now The Universe. The Minor Arcana consists of four suits of 14 cards each. The suits are Torches (Wands), Cups, Swords, and Pentacles. Each suit has 10 number cards, and 4 Court cards – Princess, Prince, Queen, and King.

The Morning card denotes a chance to begin again, to start a new day on a new note. It encourages the Seeker to use the energy of the morning to power up a new beginning.

The Night card has an unusual quality in that it encourages the Seeker to make the most of the night hours. At the end of a long day, The Night enables you to slow time and deal with issues that you have been unable to give time to during the day. The Night is a velvet cloak that enfolds you in its magic.

The cards measure 70 x 120 mm which is a fairly standard size for a tarot deck – considerably larger than playing cards, but not so outsize that they cannot be handled.

The card stock is excellent – it is quite solid without being overly heavy. The cards have some flexibility, but they are not so flimsy that they will bend or snap if you are a heavy-handed shuffler. The deck has a very smooth, high gloss finish which keeps the cards from sticking together and enables shuffling without the cards ever clumping.

The print quality is excellent – the colours are vivid and clear, there are no misprints, no colour bleeds, no blurring. Artist Tillie Walden makes the most of her comic illustrator’s skills with this bright, colourful deck. Her pallette fairly pops – the colours are strong, but not unsubtle. Crimson, orange, buttery yellow, violet, and skyblue dominate the deck, with many details picked out shades of green, puce, slate, rust, and lime.

The artist has imbued these cards with a lot of movement and energy – a tribute to her illustrative skills. Each image was hand drawn and hand coloured which gives a certain translucence and light texturing to the illustrations. There is also a relaxed informality about them, rather than the rigid seriousness that informs some tarot decks. This gives one a feeling of comfort and familiarity as opposed to apprehension when using the deck.

The illustrations are contained within a narrow white border. All the cards have handwritten titles beneath the illustration, with the Major Arcana being given both a number as well as name, and the Minor Arcana being titled in full i.e. Three of Cups, Queen of Swords etc.

The image on the back is an abstract watercolour design that recalls a desertscape, in fiery oranges and reds. It is symmetrical, and therefore reversible.

The packaging for this deck is a little curious, and quite charming. The cards and guidebook come in a solid cardboard box which is only a little larger than the cards themselves. The box opens at the bottom, and is held shut with a magnetic clasp, from here an inner box slides out. The inner box is open at the top and the cards and their little guidebook slide out quite easily. Both boxes are papered – the inner one in a faint mauve with little white stars, the outer one features illustrations from The Cosmic Slumber Tarot, as well as publisher’s information and a brief description of the deck. Both boxes are also papered inside white, with small mauve-coloured drawings of cups, swords, pentacles, and torches. This box set is small enough to drop into a shoulder bag or backpack without taking up too much space, and it is not overly heavy. The packaging will give very good protection to the deck, however it is cardboard and if it is subjected to pressure or rough handling it will eventually break.

The 56 Page guidebook is written by the artist Tillie Walden, and presented in full colour. The instructions are given in English only.

The Foreword outlines the artist’s process in coming to create and illustrate The Cosmic Slumber Tarot. This is followed by an Introduction which gives the reader a sense of the deck’s purpose.

The Major Arcana chapter has a small introduction, and each card is reproduced in full colour, and given a description as well as a divinatory meaning. Reversed meanings are not given, however possible negative implications of each card are included. The Minor Arcana has its own chapter with a small introduction as well. While the card’s illustrations are not reproduced individually, each suit has its own space with some colourful images drawn from the cards decorating the pages. There are no descriptions of the action taking place in the Minor Arcana cards, simply a divinatory meaning for upright cards only. The interpretations for the entire deck tend to be optimistic, but do not put a positive spin on cards that are meant to come as a warning or acknowledgement of pain, sorrow, or unexpected/unwelcome change.

This is followed by a short chapter on How to Read the Tarot, which covers how to shuffle the cards, focus a question, and lay out the cards. Six tarot spreads are included – the single card draw, variations on a four card spread, the Celtic Cross, The Dream Path of The Spheres (a six card layout), and Of What Does the Universe Dream a five card layout utilising the whole deck. The very last page describes the purpose and meaning of the bonus cards – The Morning, and The Evening.

This is an absolutely charming tarot deck, full of bright energy. If you are familiar with the Rider Waite Smith classic tarot then you will have no problems in using this deck as it imagery and symbolism is quite familiar. A novice tarot reader can use this deck with no problems as it keeps to the symbolism and intent of the RWS tarot.