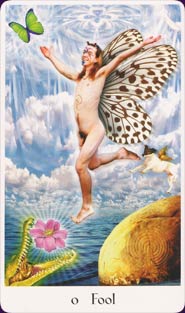 The Cosmic Tribe Tarot is an 80-card contemporary deck with three different Lovers cards included for various sexual orientations. This gorgeous and striking deck is not for the faint hearted. 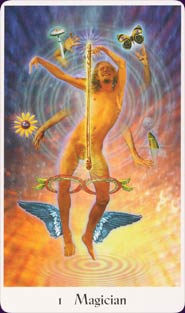 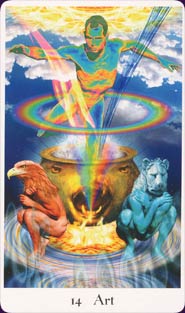 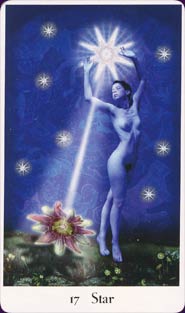 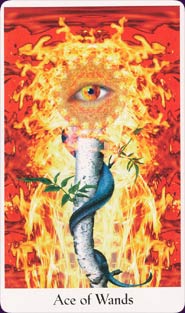 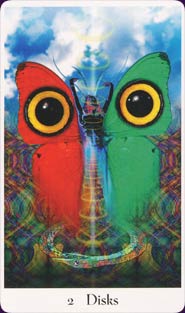 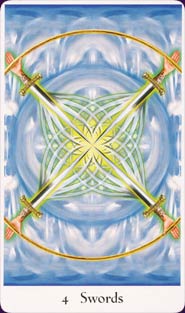 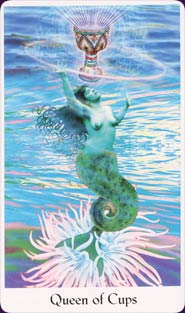 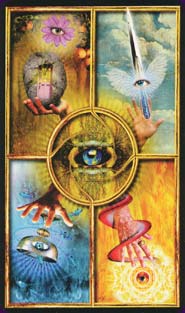 I had heard the talk about this deck for what seems forever, and had seen scans of the cards, so I was quite excited about having it in my hands and being able to work with it. One word reaction - stupendous! This deck blew me away!

The presentation and the deck support each other - and both are outstanding. The book and deck come in a sleeve type box, with two wells for the cards and the book on top of that. (Hint to publishers: the sleeve type presentation box preserves the integrity of the box longer, and is easier to access than other boxes. Enough said!) The front cover of the book shows a partial graphic of the Empress, with a an eye in the area of the heart chakra and a spiraling vortex under her. This is surrounded by six smaller pictures of other cards from the deck. Intense color here, and a good representation of the work in the deck itself.

The cards are 3" by 5" - slightly larger than a regular deck, but still able to be used by those with fairly small hands. The card stock is good quality, and there is a glossy finish to the cards that enhances the striking use of color in this deck. The deck composition is interesting - photo collage done with the use of a computer. What we see is a mix of fantasy and reality - real people mixed with fantasy settings. The combination could be less than useless, especially as Postman based this deck on the works of both Waite and Crowley - but what emerges, while not traditional Tarot, is vibrant, appealing and done with style and class.

The front of the cards uses a 1/4" white border, with the number and name of the card across the bottom. The backs, while busy, are really quite attractive. There is a 1/4" black border surrounding a center that is divided into four parts. Each of the four parts, and the center circle, are bordered in gold. The center circle contains and eye, while the four corners express the four elements - Fire, Water, Air and Earth.

Three of the Major Arcana have been renamed: Justice becomes Balance, Temperance becomes Art and Judgment becomes Emergence. There is one other innovation that I have not seen in any other deck: the Lovers is presented in three different styles - male/male, female/female and male/female. The Cherub that floats over each couple is reflected as the same sex as the couple. If, when giving a reading, one knows ahead of time the lifestyle preference of the Seeker, this could be a small tweak that would put the Seeker in their own comfort zone with the cards.

The art and thought in this deck represent multiple cultural traditions. Expect to find lots of floating eyes, and lots of flowers wandering through these cards! Several of the cards in this deck really caught my eye. OK - almost all of the cards did, but I am only going to describe a few of them! The Hierophant is one of the cards that I look at in each deck, along with the hermit. The Hierophant in this deck shows the upper torso and head of an Asian appearing male, with his arms folded in front of him. This is reflected twice more above the main graphic, in progressively smaller size and as "ghosts", moving up through a ray of light that is coming from the sky and surrounding the main figure. The background is shimmering with many small eyes. And no - this is not a scary card!

The Hermit is shown as a figure standing in the middle of a stone archway. The scene behind the figure is night, and a new moon shines in the sky. In his left hand he holds a light. To the bottom of the picture we see an inset of flowers, while the body of the figure acts as a frame for a scene containing a blue sky, fluffy clouds and a beautiful tree filled with green leaves in the middle of a meadow.

The Nine of Swords is another quite evocative card. Four swords line the top of the picture, with tips facing down; five swords line the bottom of the picture, with the tips facing up and coming between the top swords. The sword blades are shimmering - not solid. "Ghost" arms and hands come from either side of the picture to gather the swords together. In the center of the swords is a "ghost" image of a bird with head up and wings outspread. The shimmering swords are piercing the wings and body of the bird. Again - not gruesome, but certainly food for thought.

The introduction to the book and the text is written, and written well, by Eric Ganther. In his own words, he sees the Tarot as akin to a map, showing the universal energies in life. Ganther's words are gentle and flowing - a very good accompaniment for Stevee Postman's work. I had to smile when I read Ganther's advise about the interpretation's for the cards - if the interpretation in the book differed from the reader's personal interpretation, that they should feel free to use their own!

There is a small section at the back of the book that speaks of getting to know your cards, storing them, working with daily meditations and doing readings. Several spreads that really open up the cards are given. One and two card spreads; a three card spread dealing with body/mind/spirit; two five card spreads that deal with working through situations/issues; a nine card "Cosmic Eye" meditation mandala and the ten card Celtic Cross spread.

This is very much a modern, fantasy type deck, with nudity (which I did not find offensive) and a non-traditional way of interpreting the cards. However, I find the deck well done, easy to work with and shimmering with energy! I recommend this deck to those that want to open up their readings, or to those that have clients with alternative lifestyles. If I only used this deck once a year, I would find it worthwhile to own. It will find its place on the path of many Tarot aficionados.

My first impression when looking through the cards of this deck was WOW! The images on the computer screen just did not do justice to the real thing. What I purchased originally as a novelty has quickly become my favorite deck to work with.

The Cosmic Tribe is photographic collage enhanced with computer graphic elements creating a lively and vibrant deck reflecting the new century. The three dimensional effects add both depth and movement to the cards. The colors used are bright and deliberately selected adding to the meaning of the cards. There is a playfulness in this deck that I have not seen any other of its high caliber.

Arabic numbers are used on the Major Arcana, with Balance as card 8 and Strength as 11. Justice has been renamed Balance (8) and Judgment has been renamed Emergence (20). There are three Lovers cards from which to choose: male/female, female/female, and male/male. Card suits and elemental correspondence is: swords/air, wands/fire, cups/water and disks/earth. The Cosmic Tribe is largely based on Crowley's Thoth deck.

Court cards are Queen, Knight, Princess and Prince. The Minor Arcana are pips with graphic design elements, but are not illustrated completely as in the Raider Waite type decks. However, it is important to note that the use of color and the graphic designs are extremely evocative.

Cards are a little oversized, measuring 5" X 3". The backs of the cards are non-reversible with 4 mini-cards representing the elements on each fourth of the card and a large cosmic eye in the center. Each of the elemental mini-cards also includes a cosmic eye, which is a theme that runs through this deck. The border on the back of the cards is black, this the edges begin to show a little wear quickly due to the quality of the card stock. If there was one thing I would change about this deck it would be for it to be printed on higher quality card-stock. The faces of the cards have a thin white border, which nicely off-sets the vibrant colors.

The book that accompanies the deck is excellent guiding the reader to understand the cards and their power, not simply giving cookie-mold definitions of the meanings of the cards. Poetry related to each card is included, and although most of the book is dedicated to the actual cards, there is also a section on working with the cards that includes spreads, meditation and information on deck storage.

Overall I think this is an excellent deck and book set! I have found The Cosmic Tribe to be extremely clear in readings and very easy use. It is also good for meditative work. I would recommend this deck to Tarot enthusiasts of all experience levels, and is a must for deck collectors. It is refreshing to see such a wonderful creation. Thank you Stevee Postman!