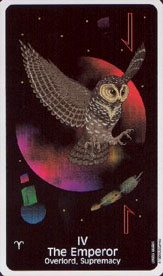 The Crow's Magick Tarot is the second deck created by artist Londa. The cards have a very dark feel, probably because most of the scenes have a black background. I'm not sure how the symbols relate to traditional tarot, but the images are powerful. 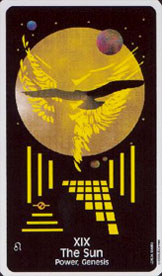 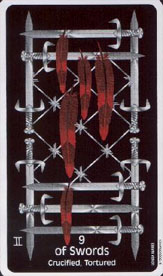 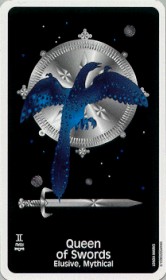 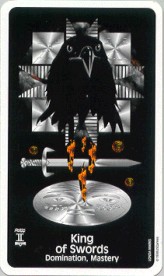 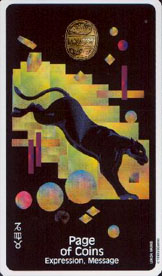 I chanced upon this deck while taking a stroll in Christopher St. in New York City in a store called Sticks and Stones, and I was immediately drawn to the artwork on the box. I held it in my hands and I knew I just had to have it. I have been using this deck for years since that. I even have two spare decks, sealed.

Though there are two keywords printed on each of the cards (traditional 78 tarot deck, major and minor arcana), this is by no means a beginner deck. I love the computer-generated artwork on every card but the keywords are very misleading. For those who are planning on using the Crow?s Magic Tarot, completely ignore the keywords.

With the exception of The Chariot and The Lovers, almost all the cards depict animals and creatures on them. There is a strong pagan feel to this deck, and definitely dark and gothic. Intermediate to expert readers will either immediately connect to the imagery, or feel their way around when they first attempt to read with this deck. One way to help you better understand the cards are by researching on the characteristics of the animals depicted on each card.

All in all, I rate this deck four out of four. If you are into modern, gothic decks, definitely get yourself the Crow's Magick Tarot. Thank you, Londa.

There are 78 cards with Major and Minor Arcana. The artwork is computer generated and it is the second deck created by artist Londa. The cards have a dark feel, this could be mainly the scenes have a black background. I feel that the symbols do not relate to the traditional tarot and the keywords are misleading, so I feel it would be better to ignore them. This is not a deck for beginner.

The back of the card has a white border identical to the one on the front. A solid black field with a thin red frame. Two red crows in flight, one upright and one inverted. A small 3l page booklet is in side of the deck and the text is by the author Londa Marks, the introductory page is about crows and the remainder is typical of a booklet this size. The only card spread in the booklet is the Celtic Cross Spread. Published by US Games and printed in Belgium. All the cards have a black background. The deck is standard size and is easy to shuffle. The cards do feel slippery because of the new slick protective coating.

This is Londa Marks' second deck. Not all the cards have crows on them, a lot of the crows look also like eagles. On the Ace of cups Londa has initial L. on it. The Hanged man is not hung but crucified upside down another Christian reference that peeks out of the cards. Like on the Lovers card the female and male are back to back but there is still a coiled snake at the bottom reminding us of the Adam and Eve and the decision in the Garden of Eden is to choose conscious knowledge over pleasure. Londa does point out that crows are highly intelligent animals capable of intelligent forms of behavior. In addition to crows there are various cats, lions, tigers, etc. there are also a variety of birds along with lizards, and other assorted creatures.

There are two keywords printed on each of the cards and the traditional 78 tarot deck, major and minor arcana. This deck is not for the beginner. If you are planning to use this deck ignore the keywords. There is astrological symbols on each of the cards, which you may find useful. With the exception of the Chariot and the Lovers most of the cards are animals and creatures and those who are fans of shamanistic animal work will be able to easily use it. There is a strong pagan feel to the deck and its definitely dark and gothic. Even tho the cards do appear Gothic it does indeed invoke the animal forms of the various powers of each card.

The intermediate to expert readers will immediately connect to the imagery or feel their way around when first attempting to read with it. It is one deck for anyone who collects different decks. I know it's one for the collectors shelf.