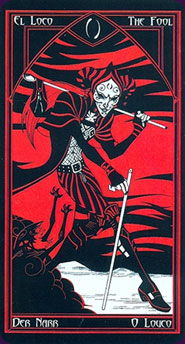 The Cruel Thing Tarot is a darkly elegant gothic tarot deck, printed entirely in black, white and red. The minors aren't fully scenic but have more interest than plain pips. 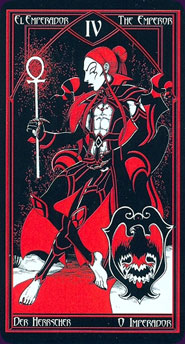 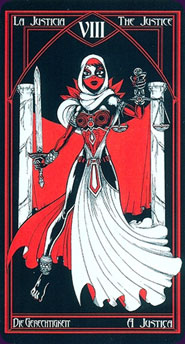 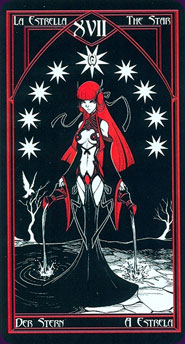 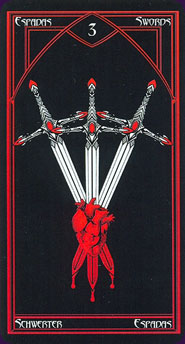 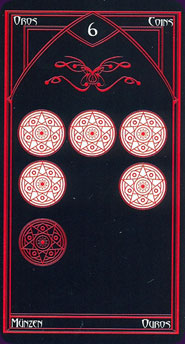 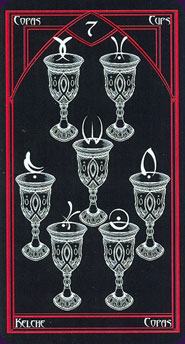 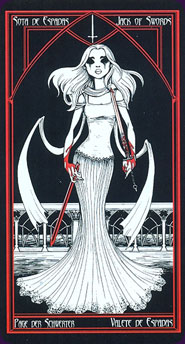 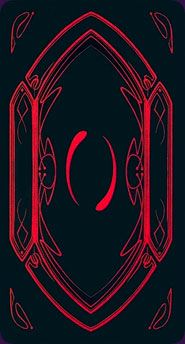 The Cruel Thing tarot is a 78 card deck drawn by Luciano Vecchio and published by Fournier. At 60 x 110mm it is slightly smaller than a standard tarot deck but nevertheless manages to contain a wealth of delicate art and symbolism.

Drawn with a strict three colour palette of black, white and red and bearing titles in four different languages it follows the structure of a standard deck: 22 majors and four suits each with ten numbered cards and four courts. Justice is VIII, Strength is XI; XIII is unnamed and the Fool is unnumbered, the usual zero being replaced by a strange symbol that, with others, reappears upon other cards of the deck. The only curiosity in the titling is that the cards usually called page or knave are here, in their English translation, called Jacks, a name more often used in playing card terminology than in tarot. The backs are an abstract design of red upon black and bear in the centre the same symbol that is found upon the Fool. The images upon the faces of the cards are captured within delicate line borders that include a Gothic arch motif that encapsulates the number of the card for the majors and the pips, and in the courts holds the symbol of the suit making easy the identification of all the cards in the deck.

The genesis of this deck comes from the Spanish graphic novel of the same name. Drawn by Vecchio and written by Lean, Cruel Thing is a darkly Gothic adult comic book that follows the exploits of a cast of characters who also appear upon the tarot deck. The artist, Vecchio, was kind enough to post on the Aeclectic Tarot Forum to talk about his creation and explained that as he is but a learner at tarot he created the deck as an artistic piece in which the characters from the saga pose as the tarot cards, rather than as a usable deck. Despite this he has nevertheless created something that is unique and eminently readable. His art captures the spirit of the tarot and its symbols in a darkly beautiful way and imparts a sense of terrible, amoral, innocence.

Peopled by characters arrayed in baroque splendour the cards of the Major Arcana are predominantly character driven. Their illustrations contrive to be wholly original whilst still following enough of the standard pattern and symbology of the tarot to be instantly recognisable. The Star pours water upon the sea and the land, Justice holds both scales and sword, and in the Tower, as The house of God is struck by lightening, two figures tumble from the ruins; all delineated in three colours and powerful yet delicate line work. A quick study of the cards immediately shows that the same characters sometimes play multiple roles within this deck. In particular the man with long red hair who appears upon no fewer than 5 of the majors. He is masked upon The Fool, suspended as the Hanged Man, and winged in the Judgement card as well as appearing as one of the two Lovers in VI and one of the Devil's chained acolytes in XV. There appears to be no obvious reason for the predominance of this individual, and it is possible that this is a matter in which a knowledge of the graphic novel would be useful. However it should not be thought that such knowledge is prerequisite. It is not. Both this repetition of character and the obscure and arcane symbols that occasionally appear should be seen as fuel for the imagination and intuition of the reader, puzzles whose answers may be found in the interplay of question and answer as the reading evolves.

The Court Cards also conform to the standard pattern. Kings and Queens are enthroned, Knights are mounted and Pages, here called Jacks, are standing. The knights are all male and the Jacks female apart from the suit of Wands in which the genders of these two cards are reversed. All hold the sign of their suit and all are distinct and separate personalities. There is no character repetition here. Instead we have a cast of 16 individuals all of whom portray one of the court, all of whom are different enough to provide the reader with a powerful and unique image for their imagination and intuition to use as a springboard toward meaning.

It must also be said that some of these cards could be considered somewhat disturbing. The Jack of Swords shows a woman with shadowed eyes, the blood red upon her wrists as though the sword she holds has been used upon herself. The Jack of Cups likewise shows a scantily dressed woman whose eye appears to have been blacked, as though she has been beaten by some other. This is not to say that all the female figures in this deck are portrayed as weak or as victims. The female Knight of Wands is pictured as a strong and dominant woman while the Jack of that suit is a week looking young man sporting again a darkened eye. Nevertheless it would seem fair to say that on the whole the men in this deck are portrayed as more powerful than the overtly sexualised women who appear, on occasion, to be their victims. Clearly this would not be to everyone's taste and yet it could be argued that this is a facet of life whether we like it or not, and that in this way the deck simply shows the way things are rather than the way we might like them to be. In this sense there is a brutal honesty about this deck and it does not seem afraid to shy away from picturing darkness and hinting at depravity, albeit that such things are drawn in a fantastical style and set in what is clearly an imaginary world.

The pip cards of the Minor Arcana are not illustrated in a pictorial style, instead they are like a stripped down version of the familiar Rider Waite images, and anyone who is familiar with those cards will be able to see the ghost of them within these. They have been done this way for a very simple and specific reason, in the words of their creator, Luciano Vecchio, speaking on the Aeclectic Tarot Forum, “...the publisher asked for just a copy/paste grid of the same image...I didn´t want to do just that, but I couldn´t afford the time to illustrate each card either, so I did something in between. I followed the compositions from the Rider White deck, arranged the elements in the same way and added some details here and there...” The prospective reader should be glad that Vecchio took the time to do this for the result is inspirational. The cards, shorn of all extraneous image and symbol are no longer constrained by the people and the settings in the famous RWS images but are instead set free to speak loud and clear. The cups of the celebrants on the three of that suit, expunged of the women that hold them, are allowed to become anything they wish; the clang of the goblets that clash together as the victors celebrate their spoils, or the bloody toast at the massacre of innocents. Likewise the five pentacles that bloom like flowers upon the church window drop leaves as a symbol of loss, but without the crippled beggars walking in the snow beneath it is left to the reader to provide context for what they see. As a system it is ingenious, touching both the familiar and the mysterious equally, allowing space for both what is already known and for what might be discovered.

The booklet that accompanies these cards is something of a disappointment. It gives every appearance of being something generic that could be placed with many decks rather than something specific to this deck. However the basic meanings are there, as is a description of the Celtic Cross spread and a short piece about the history of the tarot. Although it would have been nice to have something more deck specific it must be said that there is enough here to get a beginner started, which, perhaps, is all that is needed. One curious feature of the booklet is its format. It is stapled into a booklet that is twice as wide as the deck. This necessitates that it be folded to get it into the box, something that causes endless problems when trying to pack the cards away. Nevertheless this is curious and somewhat amusing in its originality.

As has already been mentioned, it may be thought that one would need some knowledge of the story, the graphic novel that underlies this deck. As it does not appear that the books have yet been translated into English it is a good thing that such background knowledge is unnecessary. Although it is more than possible that a perusal of the books would provide further facets of meaning hidden within this deck it is not a prerequisite of its use. Cruel Thing reads well and easily and would be suitable for both intuitive reading and using meaning learned from books or from other decks, particularly those in the Rider Waite tradiion. As the name of the deck might suggest the answers given by this deck can be both callous and pointed, however they are always relevant and are spelt out clearly by the cards, often focusing directly upon the readers deepest fears and doubts.

This deck will not be for everyone. The images are perhaps a little too dark, a little too disturbing for some, but for those that can bear to peer into the darkness Cruel Thing is a deck that will well reward them for their bravery. It is also a thing of beauty in its own right, a credit to the artist that conceived and executed it and a unique contribution to the ongoing evolution of Tarot.