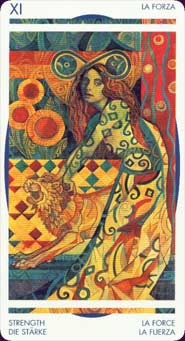 The Crystal Tarots has multi-coloured cards with an art nouveau and stained glass look. The This is the 78 card edition, which was first published as a 22-card art deck, the Tarocchi di Vetro. The minors in the 78-card edition are a re-working of card designs originally by Eudes Picards.


Card Images from the Crystal Tarots 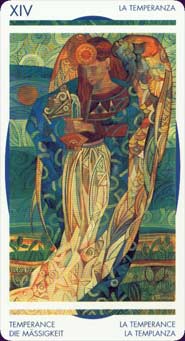 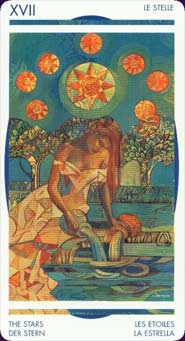 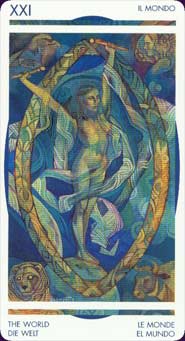 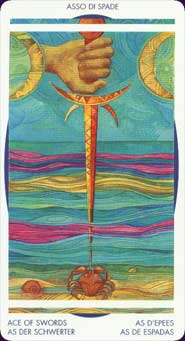 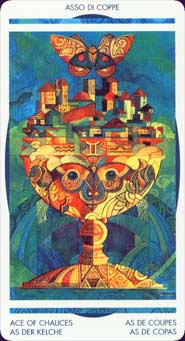 On the Tree of Life, where the pure intellect of Briah intertwines with the etheric framework of Yetzirah, there in the beauteous and unifying Sun of Tifaret, Chalices may contain the mercies and severity of Air, and Swords be as sharp and sweet as Water. The Crystal Tarot by Elisabetta Trevisan boldly dares to take the true spirit of the Four Worlds in hand, and she has created with her vision what, in and of itself, surpasses the sublime.

Working with tempera paints on glass, the original major arcana has been expanded to a complete Tarot of 78 cards. Printed on good cardstock, at 2 5/8 by 4 3/4 inches, these cards are easy to handle and shuffle, plastic-coated and durable. The back design is reversible, featuring twin peacocks in the style of the deck. There is, as of 2000, now a fold-out style LWB, with introductory background information, divinatory meanings, and suggested layouts. Lo Scarabeo's packaging is that very nice tuck-bottom style that doesn't catch the cards, and is printed with Temperance on the front of the box and the Knight of Wands on the back.

XIV Temperance is a natural to feature on the packaging of this Tarot, which blends elements and consciousness like Yin and Yang as one. The pips, cards 2 thru 10, should not be thought of as unillustrated , though they do not depict storyline activities. The forces of sacred geometry are brought to bear, and this works very well with the stained glass effect which is a special feature of these cards. Wands are Fire and Coins are Earth, but Cups are Air and Swords are Water, which though unusual is not out of keeping with the eternal variety found in modern Tarot themes. The Aces and Court Cards are powerfully presented, with stunning eloquence.

All of which is merely academic when one comes to behold the 22 images of the Major arcana. Here is where we find the heart and soul of Il Tarocchi di Vetro, Elisabetta Trevisan's splendid masterpiece. To attempt a further description of these illustrations would require the literary talents of a contemporary Dante Alighieri, so I will leave such as there is of Paradise to be found therein, divinely to your imaginations.

I have long thought of this deck as one of the most beautiful tarot decks ever created. Then I ask myself, if that’s the case, why don’t I use it every day? Maybe it’s because too much of a good thing might make me feel sickly, or perhaps truly beautiful decks are not what we always need to read well with. Perhaps beauty distracts us and what we need is something with more of an edge? Whatever the reason, I dig this deck out regularly, and consider it the deck I most love to look at and get lost in. I dream of a larger version, with no borders (imagine if it was the size of the Lo Scarabeo Universal Tarot Professional; 3.5 x 6.5 inches), a version which would exploit to the full its intoxicating, hallucinatory atmosphere and intricate details. I have quite a few versions of this deck, my standard 78 card version (which I have trimmed and which can be seen in the above scans), I also have the Lo Scarabeo edition published in 2011 together with Fabbri/Orbis for an Italian magazine series on the history of tarot and I also have one of the first German 78-card editions. I also have on the way a copy of the Majors only edition (again German, published as the Glass Tarot) which I located this week. Earlier versions of this deck are not quite as vibrant as later editions, so it is always a gamble when buying and the difference is very marked.

Trimming (one of the vibrant editions) gave it a new lease of life and made it the perfect size for carrying around as I have been doing this week. It fits perfectly into my cupped hand and can be perused in public without arousing unwelcome curiosity. Reviews always say that this deck was inspired by the artwork of Gustav Klimt but I cannot see that, apart from a few background swirl motifs. It reminds me of the paintings of Paul Klee (especially those of his North African sketchbooks) much more than it reminds me of the paintings of Klimt. The palette is similar and, being watercolour, the effect achieved – a kind of dreamy wash with colours merging – is altogether different from the oils and majestic grand scale works of Klimt.

However, I suppose we ought to mention that elements here are switched (Cups = Air, Swords = Water). That and the fact that the Minors are not conventionally scenic perhaps explains why it isn’t such a widely used or cited deck. I know a lot of people love it, I know I’m not the only one, but if a deck doesn’t have scenic Minors, it can often put people off, though these Minors are like those of the Thoth (or rather how I see those of the Thoth when reading) in that they capture a mood, a state of mind, a concept and not something “happening” or something being “done”. I find that a card which conveys atmosphere or “the idea of” something is infinitely easier to interpret than a concrete act which – for me – limits the impact. As regards the elements, although they are switched, the Sword cards still seem to be about thinking, and the Cups suit still seems to be the most emotionally charged one (so many butterflies so much flitting and mood swings!)

This week I have presentations and things coming to a bit of a head at work, so I drew three cards from the Crystal Tarot to inspire me for the forthcoming week. The middle card is what I call the “anchor” and the other cards are the “supporting acts”. Everything is reflections. The central card, the Two of Pentacles, shows sprouting and seedlings. Things will definitely take off this week, the beginning of the next phase at work will really kick into gear (I knew that!) and what was under the earth will now rise up and start to be clearly seen. This card shows that sensation vividly. In these draws about work matters, I invariably get a King, and here it is the King of Pentacles. Me in my “ruling” role! I take the symbolism of crags and rocks as comfortingly sturdy, and those are the steps I have come up to be where I am now. What most intrigues me is the supporting card on the right. This card is one of the most intriguing cards in the deck, the Seven of Swords. I read it as showing thought filtering. The symbolism is very striking; an underwater sun, expressionless but serene, and rays filtering through the Moon and coming to a point, converging slightly below the Sun. It is as if we have two prisms of thought, first the Moon, then the Sun coming to a sharpened point. I look at this card and know it means something profound, could mean many things in fact. The inner unconscious me (The Moon) and letting that Self filter through the “worldly” working Self (The Sun), letting it govern my decisions in the outer world. I feel as though this is what it is saying; allow the inner you into your decision-making, let yourself be the prism; don’t be the isolated King of Pentacles on his crag, let the inner selves merge; there’s a nice balance between sturdiness (The King of Pentacles) versus the fluidity of thought (Seven of Swords) with sprouting as the central theme. Whenever I read with this deck I always get readings based on a theme of merging and fusion, internal, external, Pentacles hidden in the unconscious earth and Pentacles rising into the outer, “seen” world. This is such a gorgeous deck, and cards drawn always give consoling thoughts.