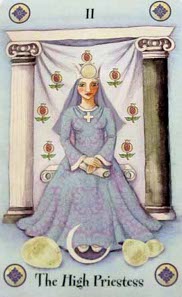 The Crystal Tarot links tarot with crystal therapy. The major arcana have fairly standard imagery, but the minors are non-scenic. The illustrations were created by the same artist as the cards of the Art of Tarot.


Card Images from the Crystal Tarot 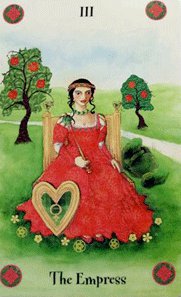 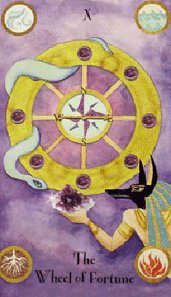 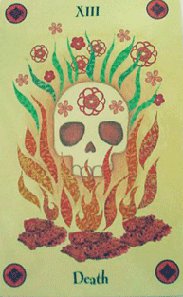 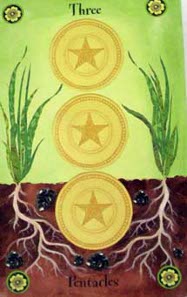 In a word — charming. But on deeper consideration — a little disappointing. This apparent contradiction probably runs directly down the Arcanas; Major Arcana is charming, and Minor Arcana is sadly disappointing. Sadly, because I wanted to love the deck due to it’s unique blend of crystal therapy and Tarot. Instead I just ended up liking it. To be sure Emma Garner’s illustrations are wondrous and just “tickle you” some how, at least in the Major Arcana, but this is subsequently let down by straight-forward pips for the Minors. This may be a reviewer prejudice, and I’ll readily admit to preferring illustrated Minor Arcana cards.

The colors are uplifting throughout, and Philip Permutt’s concept of combining two disparate yet complimentary disciplines — Tarot and Crystals — is quite inspired. Without doubt, there are moments of sheer brilliance, albeit with a candy-flavored, innocent child’s-eye view (which is wonderful!), then moments of almost commonplace rendering (the pips). There’s certainly plenty of cheerful creativity here, and enough certainly to consider adding this deck to your collection if you are fond of crystals, but parts of the execution feel rushed, almost as if the publisher pressed the illustrator/author to deliver before they were ready.

Uplifting, “make-me-smile” cards included Strength, The Hermit, the Egyptian-themed Wheel of Fortune, the “hippie-sixties” Death card, and the Star. Where the concept ran out of ideas a bit — which is a good thing if you believe decks should have rigidly conformist symbolism (some people do!) — is on cards such as the Devil, the Moon, the Fool and Magician; all very much Rider-Waite. The rest of the trumps fell in between for me, with child-like renderings (which I liked, in case I wasn’t clear on that point) of basically Rider-Waite themes. In particular, this takes the grim edge of cards such as Judgment and the Tower, where a lightning bolt isn’t just demolishing the tower, it appears to be opening it like a can-opener.

Death was a little confusing for me, for example. The card is pretty, which you don’t expect of Death, with a non-scary skull surrounded by flames that burst out of Crocoite crystals, but the skull has a lotus-style flower in the third eye position, and then some very “hippie-like” floral treatments. The yellow backdrop makes the card appear almost “cheerful” and I could almost see wallpapering my wall with the love design. Does it donote change? Not intuitively, at first glance. Most of the other cards are more obvious in symbolism, such as the charming Sun trump, which looked like my son’s grade-school sunflower painting (okay, better rendering, but deliberately in that style.) A child stands between four sunflowers, and behind him is an immense child-like sun blazing in the sky. It’s really, really cute. Is it intuitively clear to a reader or seeker? Does a child, holding a sunflower, rendered in a child-like way, intuitively suggest “energy and enlightenment” — Philip’s book interpretation? Maybe not.

Still, to this point, I was delighted with my first look at the Crystal Tarot. The Minor Arcana took me down a notch in my evaluation, because I’m rarely prepared to give strong reviews to unillustrated pips—except in decks where there is a lot of solid symbolism, such as the Crowley Thoth deck. Before seeing the Minors, I was all-prepared, on a visual basis, to give this lovely deck a four out five for artwork. If I include the Minor Arcana, as I must, my personal opinion drops that rating by one star, to an overall three out of five for artwork. If a user enjoys straight numerical pips, this deck would stay a four out of five, clearly.

The unique element of this deck is the Crystal theme. As is common with inspired ideas, it is perhaps let down a bit on the execution here as well. The book, while a lovely color, perfect bound companion, is light at 64 pages. While this is fine, generally, it didn’t give the author much room to explore the crystal theme, or the rational for correspondences to certain cards and suits. However, I did find the one paragraph descriptions of appropriate crystals on Major Arcana pages illuminating. I didn’t agree with all correspondences, but that doesn’t matter, since the “logic” is mostly sound and the information is good.

For example, on The Star, Trump XVII, this is assigned to Aquarius, with the Crystal lapis lazuli and — in a nod to crystal therapy — attributed to the Sacral Chakra. The interpretation of the card, according to the book, is “inspiration and creativity” and in the closing paragraph, where the crystal link is described, Philip writes, “Lapis lazuli will help you find solutions now; it helps you organize and brings vitality…” This is consistent within its own logic, although a little narrow. Some people prefer to think of Star as “hope” or “personal transformation” or any number of other interpretations, depending on the deck. Since I am firmly of the school of thought that each reader’s own intuition should be the ultimate guide, I won’t discuss Philip’s actual interpretations. Suffice to say, the logic of crystal therapy to Major Arcana works. I’d suggest the reader pull out his or her collection of crystals when using the deck for further inspiration and meditation.

On the Minor Arcana, although not illustrated, some solid thought was put into crystal correspondences, with each card attributed to a diverse array of crystals. This is certainly fascinating and useful, and it does show that solid thought and creative development went into this deck, despite my personal preference for illustrated pips. While the crystals assigned are most illuminating, there is minimal description of the “why’s” of the assignments in the book.

All cards have very useful and creative correspondences, with four inset circles on each card illustrating attributions to elements, crystals, and so on. This is most useful and interesting, and makes the deck worthwhile. Philip uses the standard attributions for elements of Swords as air and Wands as fire.

Quality overall is very good indeed. If you don’t like glossy cards, you might have a problem. The cards are glossy both sides and full-bleed images with no borders, and did show my fingerprints. The box is good quality, although the book is very tight and difficult at first to pull out.

In readings, as always happens, personal intuition took over and I rarely referred to the book. If you are already working with both Tarot and Crystals, the book will likely be ignored for the most part. For someone not yet into either Tarot or Crystals, the book is somewhat light on detail, but very easy to use and handy in size, with full color renderings. Phililp’s interpretations are focused on making everything work with crystal correspondences, so his keywords do not apply to other decks and may not appeal to every user. As always, I allowed my own intuition to be the judge, with mostly good results.

For my own personal use they were reasonably good for what I call “advice” reads, particularly a simple four card spread, but classic Celtic spreads don’t seem too revealing with this deck for me. This is likely a Pip, thing. Because I’m used to illustrated Pips, where my intuition can jump in instantly, and the story is instantly told in my head.

Four stars out five from me for Majors, two for Minors (due to my own prejudices), but this is a lovely piece of artwork overall, and certainly very uplifting and wonderful to study and admire. The illustrations just make you smile, somehow, even though I doubt it could ever be my “every day” deck.

At first glance, this is a beautiful deck. At second, it's a tad disappointing. The major arcana are beautiful, especially for a first deck from the artist, but the minor arcana cards are rather simple and unimaginative. The major arcana cards are child-like and fun, and they have a very positive energy. My favorite card being The World, because of its beautiful simplicity. It depicts a woman holding two crystal wands and a green and red wreath behind her. The background is light blue and in the corners there are depictions of the four elements.

Another one of the better cards is The Hermit. It shows an old man holding a staff and a lantern in the night. Other cards that I think are worth mentioning are The Chariot, The Empress, the Moon, and The High Priestess. A lesser card in the major arcana is Death, as I think its energy is too happy and doesn't denote change in the least. Overall the major arcana are beautiful, but the minor arcana were very disappointing. While the court cards very pretty, most of the others are repetitive and obvious. I do, however, like the Cups cards, especially the Six of Cups.

The cards are each paired with a crystal. Hence, Crystal Tarot. If you have read Scott Cunningham's Stone Tarot chapter in his books on stones and crystals, then you would find that the cards in the major arcana match up to his stones (he doesn't cover the minor arcana) and I put a great deal of trust in Scott Cunningham's work.

Overall, I would say that this is a simple, but good deck. The minor arcana detracts a bit from the deck as a whole, but I would rate it at about a three star, and highly recommend it for a beginner deck. The books is very informative and goes into detail on the cards. It is easy to understand and can be used with any book. Also, I recommend it for anyone who is greatly interested in stones and crystals, as I am.