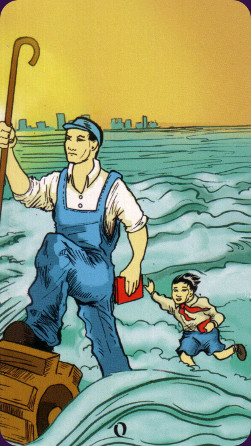 The Cultural Revolution Tarot is based on propaganda posters from the Chinese cultural revolution era in the late 1960s and early 1970s. The 78 cards show experiences from the era, from famine and oppression to scenes of daily life and local colour. 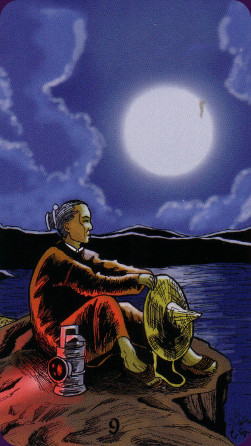 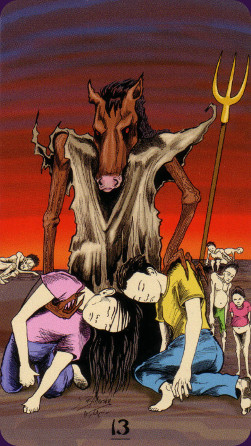 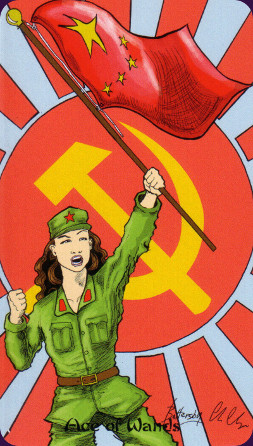 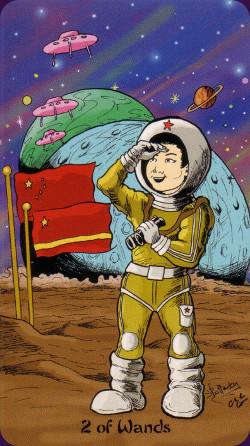 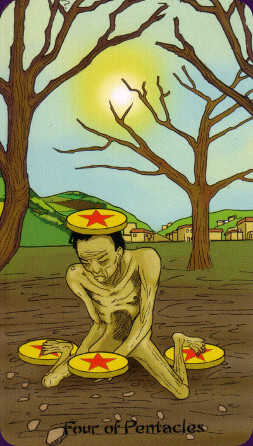 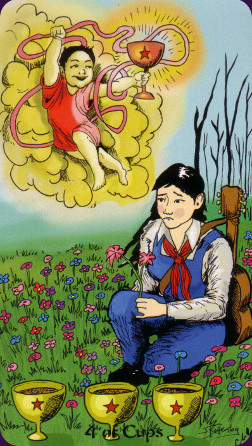 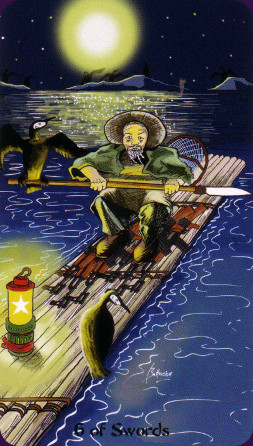 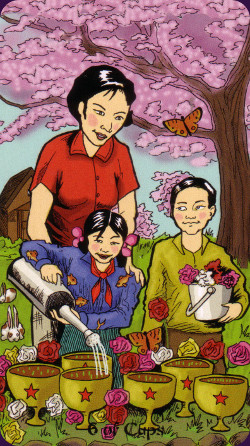 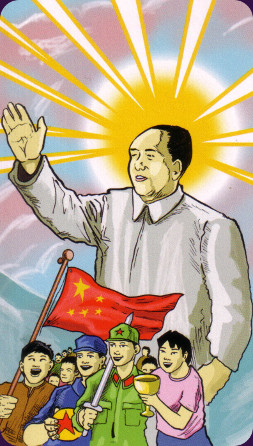 This deck is based on the art of propaganda posters from the late 60s-early 70s, dealing with the Cultural Revolution era in China. Some cards are fairly clearly taken almost verbatim from these posters, but there is no shortage of images which could not in any way be seen as pro-revolution propaganda; the deck covers the full range of tarot symbolism and the “bad” cards are just as bad as those of any other deck.

There are cards showing violence, viciousness, tragedy, starvation – hardly the glorification of the Cultural Revolution that has been suggested by some of this deck’s detractors. In the accompanying leaflet, the creators do discuss the fact that while the Cultural Revolution was in many ways not a bad thing – unless you happen to believe that communism is a sin, which I don’t (and let us not forget that the Dalai Lama himself recently said that he was a Marxist and that he regarded Mao Zedong as a friend, saying Mao was like a father to him) - it also led – in some cases indirectly – to deaths and destruction. It seems to me a fairly accurate representation of the times – an ideological one with tremendous hopes, some of which paid off and some of which ended disastrously. The leaflet says quite clearly that the negative cards represent the more negative aspects of the Cultural Revolution. The Eight Swords, specifically, shows the public naming and shaming (“struggle sessions”) of those considered to be “reactionaries” – not one of the finer moments of the time, and not glossed over by the deck’s creators. This deck is in no way a whitewash.

The politics out of the way – how is it as TAROT ? I’d say – pretty good. The artwork is well done. It draws one in; the colours are well chosen and on the bright side – Warhol springs to mind; I gather he is one of Aguiar’s favourite artists! The one thing I really do not like is the backs, which I find garish and distracting when the deck is face down – not helpful when clearing the mind to read! I think a deck does not need to make its point on the backs; the cards can do that, but when preparing to draw for a reading, I feel one needs a bit of quiet, and I am relieved that at least this copy has blue based backs, rather than the red ones Aguiar apparently prefers.

There is plenty of Chinese-related content – lotus blossoms, cherry trees, pandas, carp - the mythological symbol of abundance - those little bridges like the ones in the Willow Pattern crockery, dragons like those seen at Chinese New Year. Swords are mostly shown as bayonets or knives, in keeping with the time. Pentacles are “gold” coins with a red star. Gold cups also bear a red star. Wands are more various, from gold batons to a pile of logs. In the “Technicolour” version of the deck (which I haven’t seen) the suits are changed to Cups, Flags (Wands), Blades (Swords) and Stars (Pentacles). This is not the case with the copy I have, which is the readily available one.

Cards I particularly like (well, like may not always be the best word…) Empress – a woman farmer with a child, carrying two lambs. Chariot - the rider in a seashell drawn by two huge carp. Hermit – a meditating man on a seashore under a full moon. Justice – a woman with a yoke and two baskets, one with fruit and one with a happy child. Six Swords – with the “usual” boat as a raft with cormorants and a lantern under the moon. Four and five pentacles - two cards which graphically evidence the starvation that occurred, and are beautifully drawn; the man on the four is totally weighted down, even with a desperately heavy coin on his head. Ace cups – two children with sunflowers, a panda, rabbits, birds, a Siamese kitten – just full of childish joy.

Death – my favourite card in the tarot spectrum! – is well done, with a skeletal horse standing over two dead people and several starving ones behind.

Cards I don’t like: Strength – too violent for this card, in my mind, with an angry woman tearing up a US flag, and for some reason black dripping graffiti on the building behind her – it makes me think of a shootout. Strength is not a violent card, for me. Several cards which include high-kicking women who seem to me artificially posed – notably Wheel and 2 of Pentacles. The Queen of Swords - another overly violent image for this card, though the alternative Queen supplied with the deck works for me. While I take Battersby’s point made somewhere that radical feminism is also violent – I don’t happen to see that queen (or any of the queens!) as a radical feminist in any deck.

Technical bits: the stock is good and solid; the borderless cards measure 12 cm by 7 cm; the backs are non-reversible, and the deck is supplied in a red faux-velvet bag (which immediately made me think of the Little Red Book – probably intentionally !) with a leaflet with basic details and instructions. My copy has three extra cards - two “alts”- two swords and Queen Swords - that the creators had decided not to use, but which are included as extras, and a six cups with an error (the bleed line is showing), which is included along with the corrected one, because – hey, extra cards, right ?

As a tarot deck, this is one I find intriguing. The images convey the “usual” Waite-Smith meanings, in a very different style from others. Battersby has been involved in other tarot decks – those I know are the popular King’s Journey Tarot and Simply Deep Tarot, both done in collaboration with Chanel Bayless. His art in those decks, and in this one, is of a high quality, and the subject matter has made for a very different style which does indeed convey the feel of the look of propaganda posters of the time – but does not come over as propaganda. Not an easy line to tread, and I think the deck has been carefully balanced. Propaganda art is an interesting area, and while it could have been used to make a deck entirely in support of the revolution, that is not what has happened – we have here a deck whose cards are balanced in the same proportions of “good” and “bad” cards as any other in the Waite tradition.