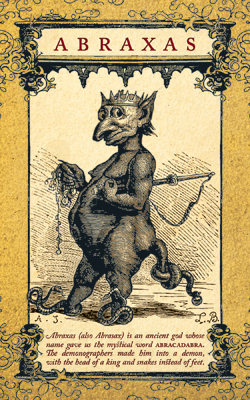 The Daemon Tarot is a 69-card divination deck drawing upon The Infernal Dictionary, a 19th century collection of daemon lore. The deck links 69 daemons and their attributes with each card, and assists in accessing their energies.


Card Images from the Daemon Tarot 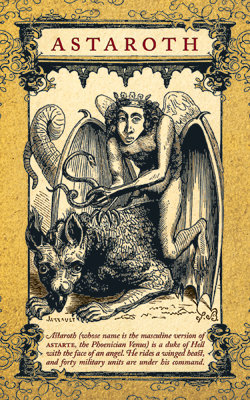 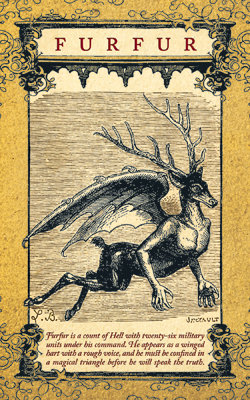 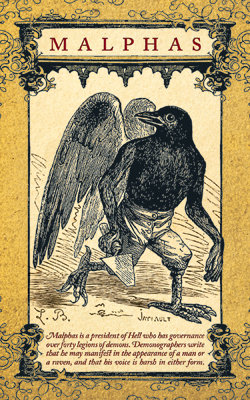 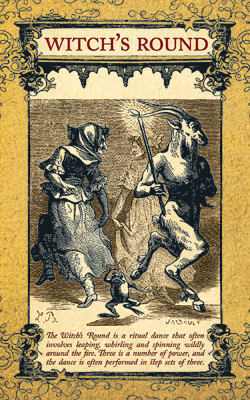 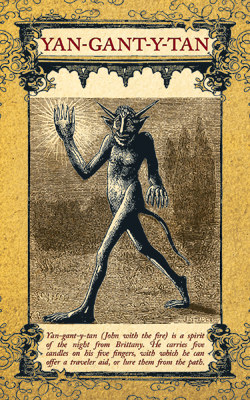 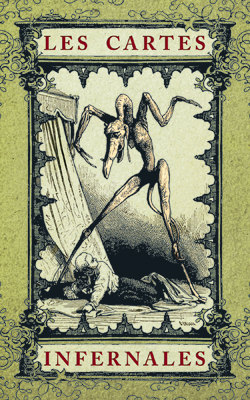 First of all, "The Daemon Tarot" is not a Tarot deck. It's a deck of cards with the illustrations from the 1863 edition of Jacques Auguste Simon Collin de Plancy's "Dictionnaire Infernal" (the original 1818 edition was not illustrated). While the "Dictionnaire" is definitely due for a reprint, the illustrations may be its most interesting feature for many people, so I appreciated having the opportunity to see them through this deck.

I can only assume that it was mislabeled as a "Tarot" deck out of the idea that any card deck with even a remote occult connection is "Tarot." One can forgive this, along with the pretension of the extra "a" in "Daemon" undoubtedly added to suggest an air of authenticity that mere "demon" lacks, despte inadvertently calling to mind a background process running on a computer, and not a denizen of the netherworld.

The deck includes a book with black and white illustrations of each card, larger than the cards themselves, although not of the same quality. Each card's description is divided into three sections: "Annotation" explains the demon's origin and attributes, "Inspiration" is the author's own observations, and "Divination" indicates the card's significance in the reader's own life.

The cards themselves are printed on high-quality stock, measuring 4 by 3 inches, with the monochrome images and text printed clearly in black on a tan background. Each card gives the demon's name and includes a short description of his role in "Hell." The backs have a greenish tinge, and depict a slender, dinosaurish demon, rendered in a flesh tone, menacing a prostrate human figure, with the words "Les Cartes Infernales." Order is alphabetical.

The demons themselves run the gamut from the well-known Lucifer, Mammon, Beelzebub, Moloch, and Cerberus (the distinction between Ancient Greek and Christian is apparently irrelevant), to the less familiar Abraxas, Astaroth, and Azazel, and finally to the fairly obscure Furfur, Ganga-Gramma, and Leonard (yes, there is a demon named "Leonard," a man with a goat's head bearing three horns).

There is also "Brooms" and "Sabbat" which are not demons at all, but respectively, magical implements and ceremonies. Also present is "Torngarsuk," an Inuit deity who must have been included here only because he is present in de Plancy's book. To de Plancy, a fervent Catholic, a demon was a demon whether it was a Christian resident of Hell or the god of a traditional religion. At least the book clarifies that Torngarsuk was not a demon, and was seen as benevolent.

I can't comment on the appeal of this deck to actual demon-worshippers; I imagine that they would find it rather limiting. It's certainly of historical interest, and as a collection of iconic images, I suppose it could be used for guidance and inspiration, the same as any other Tarot or divination deck if one were to take the time to learn its unique system. Until de Plancy's work is reissued at a reasonable price, "The Daemon Tarot" is an acceptable substitute.