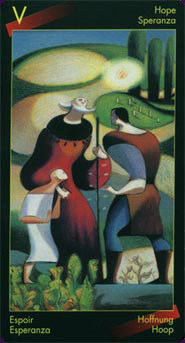 Inspired and directed by the life and works of the medieval Italian poet Dante, who is perhaps best known for his Divine Comedy. The Dante Tarot is a stunning and unique tarot deck that has tranformed the traditional tarot symbols.


Card Images from the Dante Tarot 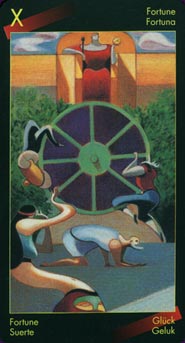 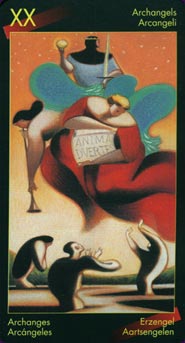 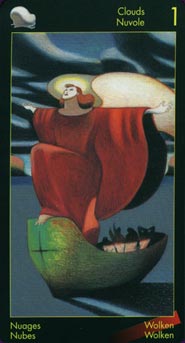 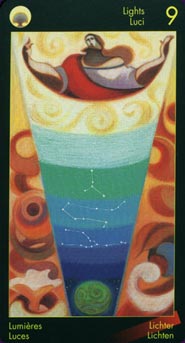 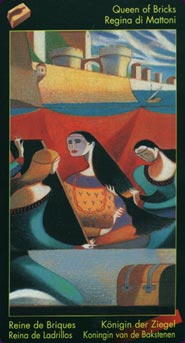 The Dante Tarot was inspired by the life and creations of Dante Alighieri, who was an Italian poet born in 1265. He is best known for his Divina Commedia (Divine Comedy), a poem that describes a journey into the three parts of the Christian afterlife: Inferno, Purgatorio, and Paradiso - Hell, Purgatory and Heaven.

As there is no real relationship between Dante Alighieri and the Tarot, the four suits and the major arcana cards, or Trionfi, have been transformed to fit with Dantesque themes.

The suit of Bricks (Pentacles) traces Dante's life, depicting influential characters, his work, and his marriage ups and down. It begins with Florence, and Studies, moving on to First Love, The Court of Love, sliding into Bad Company and ending up in Marriage. Then comes the enemy, followed by Simoniac Popes, the Lady of Stone and finally Cino di Pistoia. The court cards are various backers, advisors and friends.

The other three suits correspond to the sections of the Divine Comedy. Flames (Swords) depict the main events shown in Dante's Inferno and are accordingly grim. Cards feature Charon, Cerberus, The suicides, and the King of Flames, Lucifer. The suit of Clouds (Pentacles) shows slices of Purgatory, while Lights (Cups) are a positive suit, representing the ascension into heaven.

Dante's earlier work, the Convivio, "an encyclopaedic exposition of Medieval knowledge", forms the basis for the Trionfi. The traditional tarot archetypes have been reworked to fit with the concepts introduced in the Convivio. Major arcana titles have been changed and stand for abstract skills and qualities. For example, Need is the Fool card, Direction the Chariot, Moderation Temperance, Authority is the Devil (which does not have as dark an interpretation as many a 'fluffier' tarot deck - it instead stands for 'ambiguous charm, magnetism, charisma, ability to convince.')

The little white book packaged with the Dante Tarot provides titles and very basic divinatory keywords - suggestions, really - for each card. These are useful because most cards, but the minor arcana in particular depart so far from 'standard' well-known tarot structure and meanings.

The smooth, distinctive, two-dimensional art was designed by Giordano Berti and created in pastels by Andrea Serio. The surreal theme is seamless - every card is immediately recognisable as a card from the Dante Tarot.

The Dante Tarot is a themed art deck, not a standard tarot deck suitable for everyone. Certain liberties have been made with the 'traditional' tarot structure and symbols, but that is part of the attraction of this intriguing and imaginative set of cards.

The inspiration for the pack is based on Dante's life and work. There is some departure from the traditional Rider Waite/Coleman Smith symbology both in the minor and major arcanas. The minor arcana is made up of 4 suits: Bricks (Wands), Flames (Swords), Clouds (Pentacles), Lights (Cups). The insert that comes with the cards show that the suits are based on Dante's work. King of Flames is named Lucifer, 3 of Clouds - the valley in bloom, Queen of Lights - Virgin Mary, etc.

The artwork is stylised and surrealistic. Some of the artwork reflect the traditional symbology while others are striking in their differences. The Hanged Man is replaced by Charity which depicts a woman breast-feeding a baby while providing alms to children (maternal and material charity). While The Devil (renamed Authority) is instantly recognisable, the artwork shows a subdues Devil. The insert describes Authority as ambiguous charm, magnetism, charisma, ability to convince. Perhaps these characteristics are more pronounced for those in authority.

My re-action to these cards are that they tend to do well with a combination of traditional interpretation and free association. Or parhaps it may be used in conjunction with dream interpretation.

The cards are beautiful to look at although it may be disturbing to some. The artwork on the box is also worth a look. As it says on the box - The Divine Comedy's allegories lead along the path of life! And the cards represent the allegories. I have not read the Divine Comedy but feel an affinity for the cards just the same.