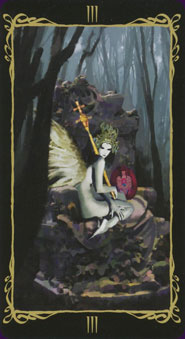 The Dark Angels Tarot is a gothic tarot focusing on heaven's outcast angels. "Achingly beautiful, mysterious, and undoubtedly wise, these unearthly creatures have much to teach us of our own shadow selves." 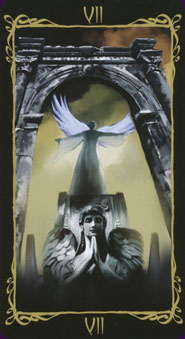 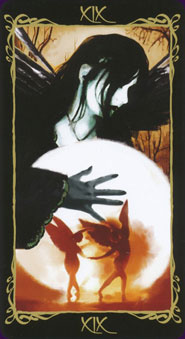 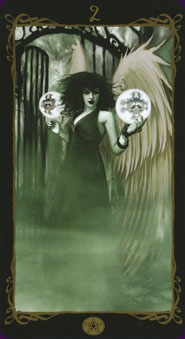 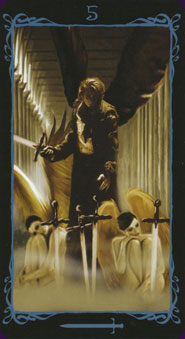 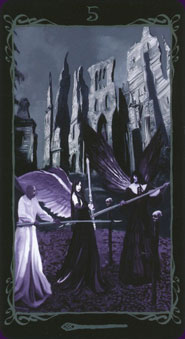 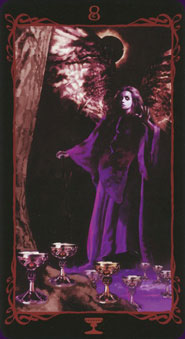 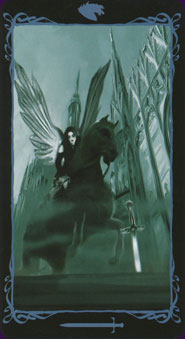 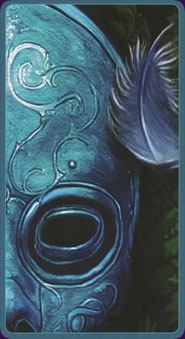 LoScarabeo has produced several decks which explore the darker side of humanity however this one goes a step further and explores the presence of spiritual being in the last days of man. The concept is that the Divine has turned away from a ruined earth but some of the angels have taken pity of what is left of mankind and chosen to at least partially incarnate and accompany mankind to end.

In style, the art, by Luca Russo, is difficult to categorize. The palette is very limited, but not pure black and white. The colours that are present are muted. It appears to have started with computer generated figures to which an artistic overlay has been added. Given that it is about spiritual figures that have chosen to be flesh, the oddness of appearance seems appropriate. I found the overall feel to have been carried out consistently and the deck almost borders on the Gothic. It is not conventionally pretty but rather intriguing and atmospheric with an almost lush overlay of sadness and a strange fantastical quality.

LoScarabeo, as they have with more and more decks, has left off titles on the cards. The Major Arcana have Roman numerals, while each suit is denoted by its standard symbol in the lower frame and a number in the upper frame. The Court cards has a symbol, for example a horse head for the knights plus the suit symbol. No words appear on the cards.

While most of the figures have angels’ wings, they are sometimes shown interacting with humans. Again, a sense of sadness and loss pervades the deck, but when you start to interpret it in the context of ‘the end of days’, the mournfulness and sense of time lost and wasted makes sense. Given that almost everyone goes through this sort of feeling at times on their lives, when the sense of everything lost and all wasted is crushing, this deck has its place in the reader’s selection. This deck sees deeply into those times and feelings and I found many of the images touching possibly because, being older, I have experienced loss so great that it felt like the end of all days.

As a reading deck, while some cards push the boundaries of the RWS meanings, I believe that most could use this deck without a large adjustment. The accompanying booklet (written by Aeclectic Tarot Forum member Lillie) follows through with sensitivity on the theme, even with the Minors. As is generally the case the card descriptions for the Majors are longer however the theme is carried through and I found it to be well written. Lillie’s descriptions are evocative, for example, for The Star she writes: "The angel pours the poisoned water upon the wasteland and it is hope itself that grows."

And among the minors, for the 6 of swords: “The ferryman takes his price, the last journey is the longest”. I suspect that the right author could make a haunting science fiction work from these cards.

Besides the suit symbols, each set has a narrow ribbon border: the Major Arcana in gold, Wands in grey, Cups in red, Swords in blue and Coins/pentacle in a muted green. The cards are the standard LoScarabeo size and the finish and quality are superb.