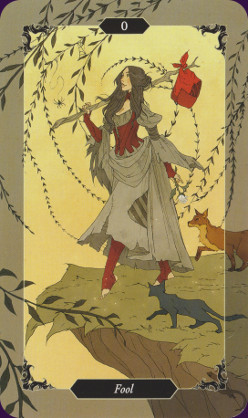 The Dark Wood Tarot is a dark deck of gothic horror, black humour and sinister fairy tales. Its 78 borderless cards are elegant and come as part of a box set with a 291-page companion book. 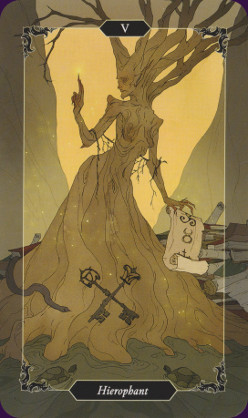 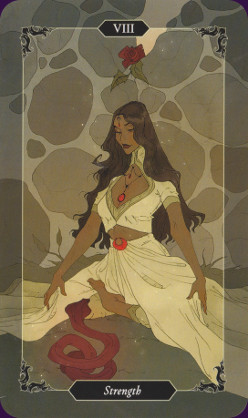 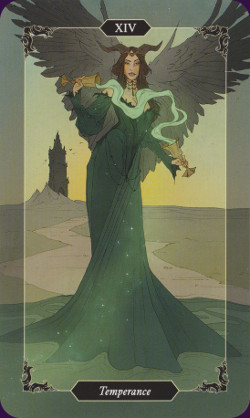 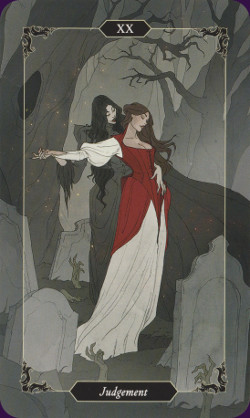 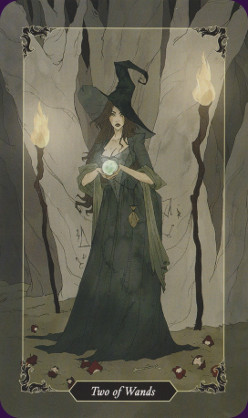 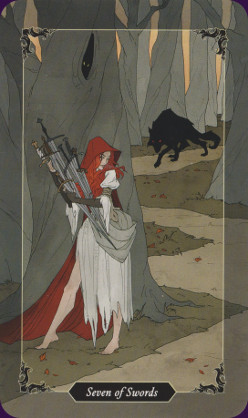 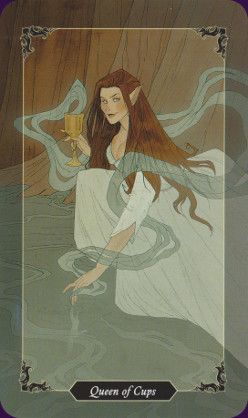 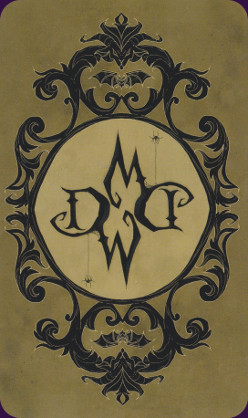 The Dark Wood Tarot is a delightful conjuring of shadowy tarot from creator Sasha Graham and artist Abigail Larson. With its roots in the Waite-Smith Tarot, the Dark Wood Tarot is a traditional deck with lashings of delicious darkness. The Shadow Path that this tarot deck takes you on is not about glorifying external wickedness but rather examining the dark impulses and places within our own psyche and soul. The Dark Wood Tarot is well conceived and beautifully illustrated, with undercurrents of black humour, sinister fairy tales, and classic horror.

This is a fully illustrated 78 card tarot deck. It has a 22 card Major Arcana and a 56 card Minor Arcana. The Minor Arcana is divided into four suits – Wands, Cups, Swords, and Pentacles. Each suit has 10 number cards and 4 Court cards – Page, Knight, Queen, King. The Major Arcana has traditional titles from The Fool through to the World, following A E Waite’s ordering.

The cards measure 70 x 118 mm, which is a fairly standard size for tarot cards. The card stock is light and exceptionally flexible, with a smooth, high-gloss finish. The face has the very faintest of toothy texture to it, while the back is as smooth as a mirror. The light card stock means that if you are a heavy-handed shuffler or tend to give your cards a good workout you are going to have to be careful when you use this deck. This deck is so smooth to shuffle, the cards flow effortlessly. This is the major advantage that light card stock affords – a compact deck that is very easy to handle.

The print quality is excellent; the images are sharp and clean, with crisp fine line work and detail. The colours are subtle and rich. There are no colour bleeds, no smudges, misprints, or blurring.

Larson's art style reflects her background particularly as a graphic novel and comic artist specialising in Gothic and macabre subject matter. Her seductive, angular characters move through a mysterious and forbidding fairytale world. While this is not a jump scare deck with images intended to shock or frighten the Seeker, it does not shy from the confronting elements contained within the tarot. And, being a shadow deck it also looks at the dark side of ‘light’ cards. The Dark Wood Tarot is less morbid and more Maleficent.

The image on the back of the card is both symmetrical and reversible – the initials DW are mirrored in a Gothic frame featuring bats and a stylised horned head/devil/pan/imp.

The Dark Wood Tarot comes as part of a box set. The box itself is solid cardboard printed inside and out with images from the Dark Wood Tarot, and featuring a solid magnetic clasp which keeps the lid firmly closed. The cards sit in a cardboard well which features the Dark Wood logo, a red satin ribbon loops under the cards and around them to facilitate their easy removal from the box. If you want to take your cards on the road then this box will give them excellent protection, however it is heavy and bulky – okay for a backpack but not for a shoulder bag.

The guidebook, by Sasha Graham, is a hefty 291 pages of glossy, full-colour, gothic, tarot awesomeness. Aside from the incredible amount of information contained in this book, the attention to detail is impressive – the endpapers of the book depict a starlit cobweb, chapter breaks feature eldritch, grasping trees, title pages have elaborate frames, while ‘regular’ pages also have frames surrounding the text – all cribbed from the deck itself. The ‘Introduction’ is a lengthy discussion of what the Shadow (and shadow witchery) is, and how 'darkness’ is not only part of our lives but an embraceable part of ourselves.

From here we move into Part 1 – ‘Reading the Wood’, which is essentially an introduction to linking storytelling with doing a tarot reading. Here you will find tips for doing intuitive readings, and deeper readings.

The next section, ‘The Shadow Self’ further examines what the shadow is in terms of personal development. It also discusses shadow meanings in the tarot, which includes several ways of reading tarot reversals.

The next section is about keeping a ‘Book of Shadows’, with suggestions about what to include, and how a Book of Shadows can be used to improve your tarot readings and knowledge.

'Initiation’ deals briefly with tarot and ritual, while 'Alchemical Questions’ deals with how to phrase questions in order to get the clearest answers.

'Enchantments’ looks at small practical magics the Seeker can do using the tarot, while 'Recurring Patterns’ looks at repetitions and patterns that occur within readings.

'The Four Suits’ outlines the elemental background and sphere of influence of each tarot suit, and 'The Royal Ones’ defines the roles Court cards have in a reading.

'Tarot Spreads’ has seven layouts including the one-card draw, several three card layouts including the Shadow Self Spread, the Deadly Problems Spread, The Awaken Inner Magic Spread, and the Hindsight/Insight/Foresight Spread. A Soulmate Spread and an Energetic Chakra Spread are also included.

The remainder of the book is split into two chapters – the Major Arcana, and the Minor Arcana. Each card regardless of its position in the deck receives equal space and attention and features a larger-than-life full colour reproduction of each card.

A Prologue sets the story in motion, a small fiction, a few pages that sets the stage and draws the Seeker into the dark woods...

This is followed by a keyword or sentence which summarises the essence of the card.

Rather than the traditional description of the illustration which lists and explains the esoteric symbolism presented and/or hidden within the artwork, Sasha Graham brings the reader to a discussion about the illustration, incorporating the actions, the symbolism, the magical meanings, the lessons represented by the illustration.

The divinatory meaning that follows the discussion is fairly standard, and falls well within the bounds of commonly accepted interpretations. Accompanying the standard interpretation is a Shadow interpretation which can be read as the dark underbelly of the standard divinatory meaning. As may be expected with a Shadow Tarot these darker interpretations are not always charming, however they are direct and address real issues. Walking the Shadow Path really invites a willingness to venture into aspects of oneself that are hidden from ourselves and others, confronting and even embracing the dark powers that lurk within all of us. To succeed rather than succumb on the Shadow Path one must be unflinchingly honest (at least with yourself) and that is what this tarot supports, brilliantly.

The Minor Arcana cards are not archetypes so they are not described as such; instead they are given an alternate title which describes the action taking place in the illustration. This is followed again by a discussion about the elements and energies depicted in the card, and how this affects the Seeker. Shadow meanings for Minor Arcana cards are also unflinching and direct, taking dead aim at some of our less salubrious qualities.

Court cards differ slightly in that the keyword/s describes the character of the royal personage - the Queen of Wands a.k.a. 'Charismatic Flame’, The Page of Swords a.k.a. 'The Detective’, the King of Pentacles a.k.a. 'The Builder’ and so on. The description goes into greater detail about the character depicted in the card, not just their personal qualities but also idiosyncrasies, hobbies and interests, likes and dislikes that typify a Court character. Again, the divinatory meanings are fairly standard, and in true Court card fashion, somewhat confusing – does it represent a person or an event? The shadow interpretations apply to both personality traits and/or possible events and actions – whether they apply to you or others is a matter for your tarot skills to discern.

The Epilogue closes the journey of the Shadow Witch through the Dark Wood and centres them with new skills, in a world where shadows are not to be feared...

This is not a tarot deck for the faint of heart, nor is it for children, or novice tarot readers for that matter. However if your tastes run towards Goth, and your humour is sharp and dark, and the bad fairy appeals so much more than the good one then this is a deck that is just made for you.