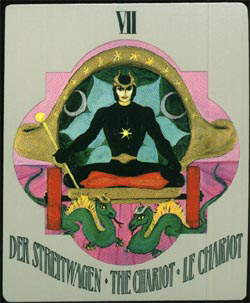 The Deva Tarot is a 93-card set, with a whole extra suit, Triax. The Deva Tarot cards show somewhat Thoth-inspired paintings, surrounded by a thick greyish border and multi-lingual titles.


Card Images from the Deva Tarot 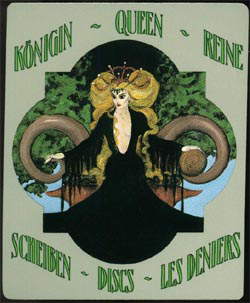 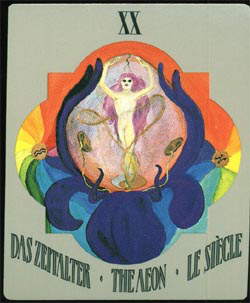 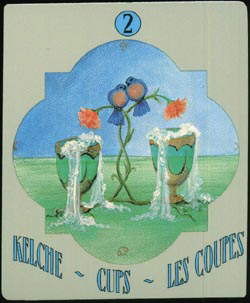 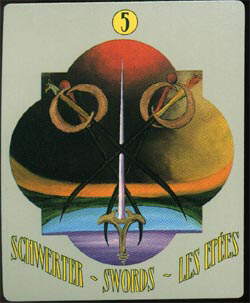 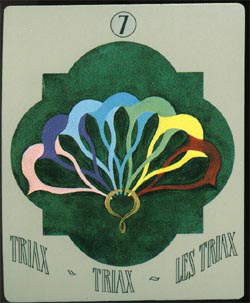 I fell in love with this deck the moment it was published back in 1986, and had to have it right away. The cards were made in Austria by Piatnik, a company with a rich cartographic history, dating back to 1882, and the quality of the company’s printing shows well on these cards.

Color and shape are obviously a huge part of this particular deck, and if you love and are drawn to permutations of color (as I am), you will find a wealth of resonance with this deck. The LWB notes the deck is non-traditional in that it is aimed more at “deep thinking, growth, meditation and counseling.” In other words, do not seek the esoterica of the Qabalah here, but instead be a free spirit drawing on your own perceptions, responses, and feelings aroused by the use of the deck. Designer Herta Drnec seems to have slipped out of sight after this deck, which is a shame. It would have been interesting to see more from this artist.

There are 93 cards, not the usual 78, due to the addition of a fifth suit and a card XXII at the end of the major arcana titled “The Separator.” In addition to the usual four suits (Wands, Cups, Swords and — in this deck — Discs), this delightfully graphic tarot employs a fifth suit, the “Triax.” It represents the etheric or spiritual element, somewhat reminiscent of The Book of Aradia’s Aether suit, which is a stand-alone fifth “spirit” suit. The Introduction notes that the Triax “refers to events or influences on a higher or soul level.”

The 3 x 4 Ľ-inch cards are on heavy but slick stock, and if there were not so many cards in the deck, they would be easy to handle and shuffle. The complete deck is 2 inches in height, which is substantial for shuffling purposes. You could easily handle one or two suits at a time, however.

Card titles/names in the major arcana have some variation from the traditional, notably card V, “The Antar” instead of “The Hierophant,” traditional Cards VIII (“Strength”) and XI (“Justice”) are switched; Card IX (“The Hermit”), is retitled “The Searcher”; Card II (“Judgement”) is retitled “The Aeon,” and Card XXI (“The World”) is retitled “The Universe.” A XXII card follows the major arcana, “The Separator,” an orange-toned space with a black line graphic design, signifying “the diverse ways that potential, skill and life can interact.”

The cards are wildly imaginative, and although they stay tied to traditional Rider-Waite tarot themes in general, they give free rein to the artist’s conceptions of devic energy. The LWB that comes with the cards notes that, “The descriptions and interpretations for this deck are not what is usually found. It is designed to pose as many questions as it answers, and leaves most of the actual meaning and interpretation to the individual — where it belongs.”

The backs are plain black with a reversible simple gold line drawing of a starburst, but it is the vibrant colors and interesting architectural designs of the images that grab and hold the reader. All of the color and image on each card is contained in what appears to be an outline of a square with (imagined) four intertwined circles, surrounded by a pleasing background of pale gray. Some have likened it to a window into the devic universe. Lettering under the image is artistic, almost calligraphy-like, and announces the card theme in three languages — German, English, and French.

The figures throughout the major arcana for the most part are portrayed appropriately as devic in nature, although a number of them leave a bit of sprightly or elfin quality to be desired, looking more all-American or Asian, or — in the case of the Empress — a bit like Mae West. The emphasis in the major arcana, as it is throughout the deck, is on color and shape.

The pip cards are not humanly figural, but neither are they stark. The objects within each suit are colorful as well as full of variety and eye-catching beauty. Colored circles at the top of the pips and the lettering below are appropriate to the suit (blue for water, etc.), with the Triax suit color a slightly darker gray than the background. The Triax cards employ figurals of shapes, flowers and animals.

A number of the cards use the full chakra range of color. For example, in the 4 of Discs, a pale pink daisy-like flower contained within a diamond shape is surrounded by a bright, light rainbow of color. The color then seems to move out beyond the diamond, deepened and vivified, into the universe bounded by the confines of the card’s architectural design. Small symbols appear at various points throughout the design.

The court cards have their own uniqueness in that they present as Knight, Prince, Princess and Queen (no Kings need apply!), and an intensity of personality and element leaps from the card to the viewer.

The substantial LWB with the deck provides ample explanation and instruction of the cards themselves, and provides a modified Celtic spread and variation for those so inclined. This deck is definitely eye candy for tarot lovers and collectors, but also provides a different perspective on aspects of tarot, one worth exploring.