Diary of a Broken Soul 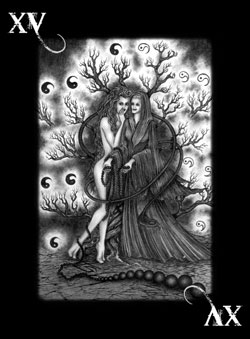 The Diary of a Broken Soul Tarot, an elegantly gothic black and white deck, is the manifestation of artist Ash's shadow work. Now self-published in a 78 card edition, there is also a slightly different 22 card edition.


Card Images from the Diary of a Broken Soul 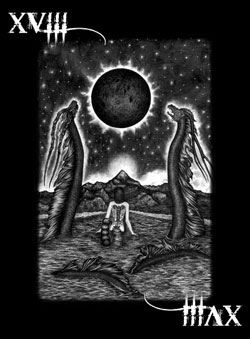 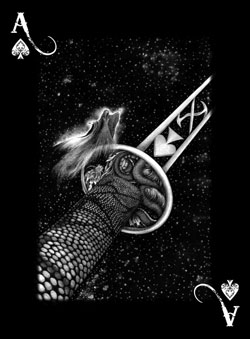 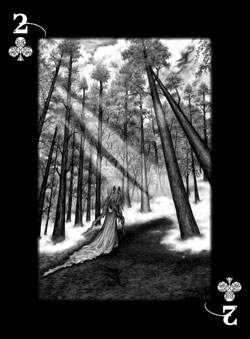 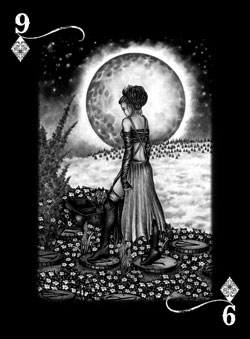 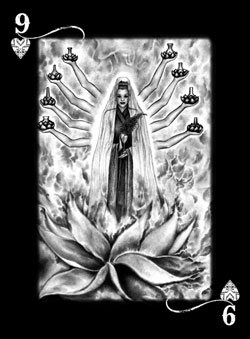 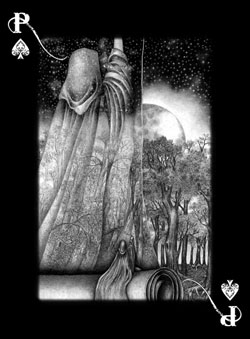 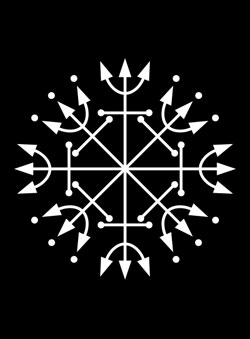 Diary of a Broken Soul Review by Ash Abdullah

Thoughts on the Diary of a Broken Soul by artist, Ash Abdullah

Originally created for shadow work, the images in this deck were created to read vertically (in progressive relations to the stages within its suit) as well as horizontally (pip in its respective suit reflect the Cognitive, Behavioural, Emotional and Physical aspects of its numerically associated Trump card).

However, as the creation process progressed, I realised that I wanted this collection of images to reach out not only to tarot readers but to anyone open to appreciating the images as well as the messages contained within The Diary. Thus, the deck that started of as a tarot creation evolved into something else.

It is a deck of Playing cards.

It is a deck of Divination cards: Tarot cards.

It is a deck of Art cards: Creative Story cards.

It is last but not least, a deck that can used as a game of strategy and planning: House of Cards.

The deck has the basic layout of playing cards. Trumps have Roman Numeric on the top left hand corner and lower right hand corner of the cards while the Pips have numbers accompanied by symbols representing the relevant suit i.e: Spades, Clubs, Hearts and Diamonds. Court cards have P = Page; J=Knight, Q=Queen and K=King.

The cards have black borders with 6 slits; to enable users to build a house of pictorial cards using The Diary of a Broken Soul.

I would like to clarify that this deck contains black and white imagery not because I intended it to be a dark deck; it is because these images were etched on paper using black ink. By darkening the shadows in my artwork, I am able to bring out the lighter aspects within a picture and as a result, the image seem more glorious because of it. It is a collection of life experiences and many of the image contain stories of people I have met in real life.

Each image was painstakingly hand drawn using the tip of a ball point pen. Though some images may seem disturbing to some; in which case I would like to state that the images were not created with the intention to enchance our discomfort; rather it is to remind us that there are shadow issues within us are have not properly dealt with. The discomfort we experience are often triggered by external stimuli, in which case, it may not be the object or person itself that is offensive but what they remind us of. Ultimately, I would stress that the decision to explore these aspects are up to the individual. There is no right or wrong choice here.

During the course of this creation, I think "my" light-bulb moment happened when I read a book titled Cognitive Behavioural Therapy by Dr. Aaron Beck. I realised that Ms. Pamela Coleman Smith summed up the entire concept of CBT in her version of the 3 of Swords card. I found renewed respect for a symbolic artist who bridged art and science in one picture.

Truly inspired by this artist, I wanted my artwork to address some aspects of life we all face regardless of colour and creed. Issues such as self-mutilation, incest, depression, suicide, etc... are extensions of what the tarot is all about and that is archetypal experiences that transcend race, culture, nationality and background. These images are done in a make-believe landscape which I hope does not exclusively feature any one cultural influence that it disables the viewer from identifying with it.

I would admit though that my deck is limited in many ways; which deck isn't? In trying to create a tool that allows me to seek guidance the best way I know how, it would suffice to say that the tool in which I have created would no doubt carry imperfections of its maker. I think overall, the objective I had in mind in the creation of The Diary is to help that process of intergrating the polarity within.

The full verson of The Diary of a Broken Soul will be ready in November 2009. Those you are interested to purchase a copy may contact me directly at sacredashes@yahoo.com.


Complete Details of Diary of a Broken Soul


Similar Decks to Diary of a Broken Soul