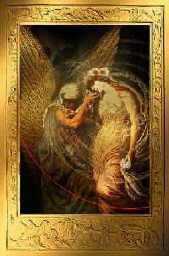 Lots of reds and yellows in Dorothy Krause's sumptuous and rich looking deck, now known as the Millennium Tarot. Large gold borders and Renaissance angels make it quite a gorgeous deck -- and it is now in print.


Card Images from the Millennium Tarot 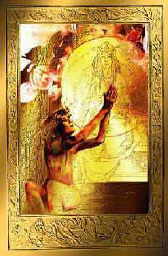 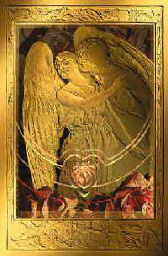 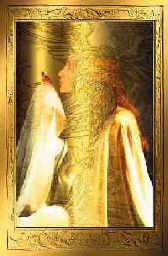 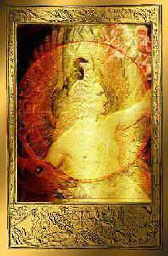 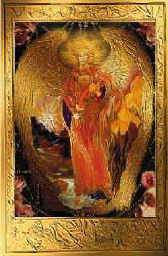 Right now I’m basking in the glow of painter, printer and collage-maker Dorothy Simpson Krause’s art. Her Millennium Tarot with its faux hammered antique gold frames and finely wrought photo collages has been added to my list of class act decks. The Minor Arcana cards have less pizzazz than the Majors, as is almost always the case, but even those bear some measure of noble radiance.

Krause’s cards are a neat, manageable 4.75" x 2.75" and shuffle easily. Although their coating feels a bit too slick to the touch, the high polish enhances the golden dazzle. The mixed media images sample unidentified paintings and statuary across various historical styles of realistic art, occasionally incorporating contemporary photographic elements.

The ultimate beauty of a deck reveals itself in the reading and Krause’s images work best for readers who already know their Tarot and enjoy uncommon visual renderings of familiar archetypes. There aren’t too many traditional symbols and clues to help you interpret the cards’ meanings, but the savvy reader should be able to weave a good story around them. The images will prove less helpful to beginning readers, even ones enchanted by this deck’s rich, dark gleam.

Marina Dubois’s text – presented in a suitably elegant mini-book – is dignified if not lavish. “The Fool is a card of great power and paradox,” she writes in her overview of the first of the Majors. “He represents both the novice and the attained master...the energetic, buoyant youth beginning his life’s journey and the enlightened seer.” (p. 6) All of which explains why the handsome fellow peering out at us bears a look of such rueful knowing. Like no other Fool I’ve seen, he seems to ask, “Are you absolutely sure you want to set out on this path?”

Yes, I do. And as I do, no other face I see will greet me with as direct and purposeful a gaze. In fact, quite a few will turn out to be faces of marble. Millennium offers an air of mystery that some readers might find compelling.

Unfortunately, Dubois’s text gives the same short shrift to the Minor Arcana as do many more cheaply produced Little White Books, which again argues for the Millennium Tarot’s working better for the experienced reader. Perhaps Dubois and Viewpoint Studios will one day publish a more substantial manual for this very worthy art deck.