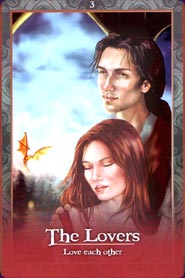 The Oracle of the Dragonfae has 43 cards with rather pretty illustrations of goddesses, gods, dragons, winged fitures and fantastical characters. It is attributed to Australian deck creator, Lucy Cavendish, but actually has cards contributed by seven different artists.


Card Images from the Oracle of the Dragonfae 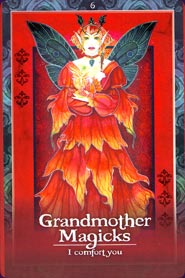 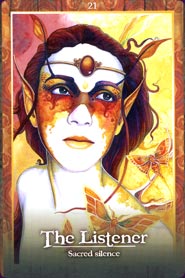 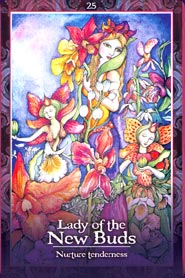 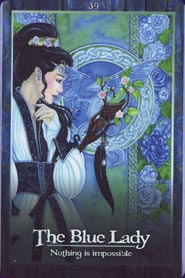 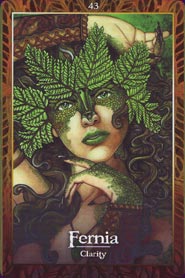 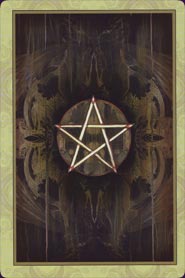 This Australian deck follows in the tradition of Doreen Virtue’s many Oracles (the Magical Unicorn Oracle, Goddess Guidance Oracle, Magical Mermaids and Dolphins Oracle, Magical Messages from the Fairies Oracle…etc), in that the Dragonfae Oracle’s artwork is the result of several artists, in the case of this deck, seven. For a deck celebrating the Goddess in her form as the Dragon, it seems appropriate that all the artists are women.

23 of the 43 cards in the deck are by Michele-lee Phelan – and some of these are extraordinary. Dragon-imagery appears in all of her cards, sometimes partially (for example, the scales which appear around some of the characters eyes).

‘Grandmother Magicks’ wears a fantastic dress, made of 4 layers of large, veined and fiery red/orange leaves. (Spirit-world wanderers will recognise this imagery.)

‘Chumara’ is another fantastical image. Aside from the form of the Dragon, the Goddess’s other popular manifestation appears as the Spider, who waits in her web on Chumara’s third eye. Surrounding her are the colours of the rainbow, from red to purple, merging with each other as they progress. Fantastic!

Without wishing to hurt anyone’s feelings, I have to say that Michele-lee Phelan’s work is the best in the deck. It is curious that more than half of the 43 cards have been painted by her. I wonder why she wasn’t commissioned to finish the job. It very much feels as though the deck is in two halves – Michele-lee’s 23 paintings, and the remaining 6 artists who share the remaining 20 cards. Two of these artists have painted only 1 card each within this deck.

What is also curious is that, of the 9 images from the deck that appear on its’ box (by way of advertising its’ contents to the general public), 7 are by Michele-lee Phelan. The other 2 are by Selena Fenech, whose 2 paintings on the box are very similar in style to Michele-lee’s. This gives the impression to the buyer that all the images within the deck are by the same artist. Being that there is no clue, other than Lucy Cavendish’s name on the box, who the artist is, the punter is left believing that all the cards were painted by Lucy Cavendish. Maybe I’m being cynical, but it does appear that, by not declaring that that contents (sealed, as usual) are by 7 different artists – none of whom wrote the accompanying book – and then advertising the decks’ contents with only one of the artists’ cards – (with the exception of, as I say, 2 out of the 9 images) – well, it seems that the publishers have decided that Michele-lee Phelan’s paintings are far more likely to sell the deck than the others.

It’s obvious from Lucy Cavendish’s accompanying book (it’s really good) that the cards were probably not painted especially for this project, as in most cases the original names for the paintings differ from the name given to the card on which the painting appears. Not that this matters of course – but the sense of the deck not feeling ‘whole’ is further fed by this fact.

Some of the imagery within the 20 cards not painted by Michele-lee are very nice – particularly ‘Queen Mab’ by Sharon MacLeod, ‘Gwynne & Elluish’ by Selina Fenech and ‘Chenguang’ by Debbie Lean. Kylie McDonough’s ‘New Moon Fae’ has some lovely purple – but annoyingly, Kylie’s New Moon Fae is lying under an Old Moon. However, if this Fae opens her eyes she’ll see what will look to her like a new moon reflecting in the water, so maybe the mistake isn’t so bad. [Editor's note: the moon's orientation is intentional and not incorrect - it is a new moon from the perspective of the southern hemisphere.]

In general, I really like this deck. Sure, I wish that Michele-lee had painted the whole thing, but never mind – there is much to enjoy here. Recommended!


Oracle of the Dragonfae Review by Terri Clement

“In a not so far away past… we worked, loved and lived with all of the elemental beings." ~ Excerpt from “The Magickal Guidebook

When you open the box of this deck and book set, you will find yourself, instantly being greeted by a deck of forty-three incredibly magical beings. You can almost feel the elemental strength and protection surround you as you flip through the cards. You will find the beauty of the Faerie Realm combined with the strength of the Dragon.

The artwork for “The Oracle of the Dragonfae” deck, is that of seven different artists. There is a small bio about each one of the artists in the back of the Guidebook. The artists use of color in the artwork is brilliant, bold and well thought out, creating very powerful imagery.

The author of “The Oracle of the Dragonfae,” is also the author of The Oracle Tarot, “Magical Spell Cards”, and “White Magic”, which are all published by Hay House. Lucy describes herself as a “book witch”, she adores writing, reading and creating enchanted workshops. She currently lives in Australia with her daughter.

The deck is a bit taller and wider than standard, is of a quality cardstock, with medium to heavy lamination. The cards are numbered, at the top, from one to forty-three. Each card holds the name of the Dragonfae and a keyword or phrase, at the bottom. Narrow borders give plenty of room for the artwork. The backs of the cards are beautifully done, with green dragons and but are not reversal friendly.

This deck would feel comfortable in the hands of the young, novice to advanced, professional reader. This set would also make a nice gift for the Faerie and Dragon friendly folk.

The one hundred sixty four page, paperback, “Magickal Guidebook” shows a small black and white copy of each card and details each card. You will find a message from each Dragonfae, information about each one, the Divinatory Meaning and how to work with the energy of each Dragonfae.

The Guidebook also includes information on handling the cards, from shuffling, reading methods, Dragonfae truths, myths and how to communicate with them. It also includes two spreads, from an effective three card spread to a larger, more in-depth eleven card spread. The author also encourages using other spreads.

Upon further exploration you will find that these elementals are much more than they appear. They have been designed to help us heal ourselves, others and save our planet. They encourage you to see the magic in the world around you, every day! Even though this deck is very beautiful, this is not a fluffy faerie deck. Be prepared to do some soul searching, when using this oracle.


Complete Details of Oracle of the Dragonfae


Similar Decks to Oracle of the Dragonfae

Home > Decks > Oracle of the Dragonfae