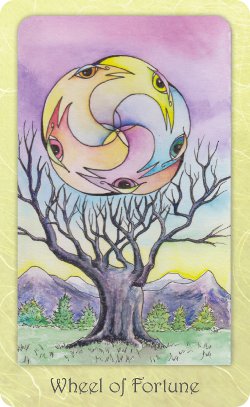 The Dream Raven Tarot is 78 card deck illustrated with brightly coloured ravens of all types. Artist Beth Seilonen sees ravens as a carrier of messages for the soul, and has designed the imagery to assist the reader with bringing their dreams into their conscious reality. 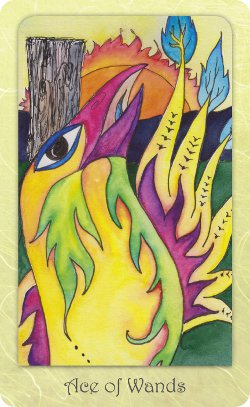 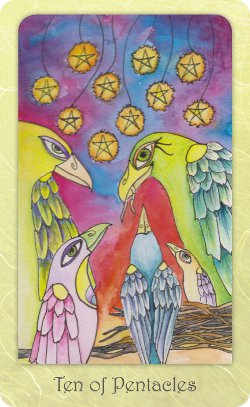 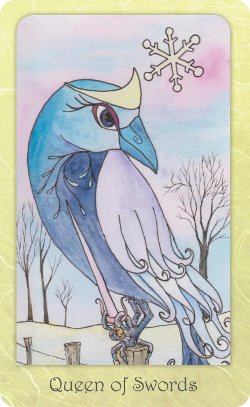 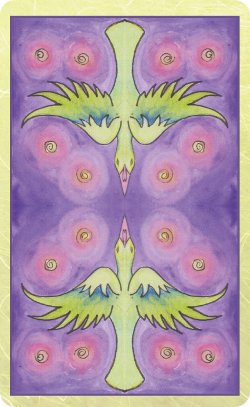 The “Dream Raven Tarot” is a traditional 78 card Tarot deck, with a 128 page guidebook. Traditional titles are used for the Major Arcana, with Strength at VIII and Justice at XI. The Minor Arcana suit titles are Wands, Cups, Swords, and Pentacles, with the Court Card titles being Page, Knight, Queen, and King. The cards and guidebook come in a hard cardboard box with the trademark Schiffer magnetic lid. The cover of the book shows the Ten of Cups, while the cover of the box shows the Star.

The theme for this deck is that of the Raven being seen as a carrier of messages through dreams …messages for the soul. The messages in this deck are brought by ravens of all types, ready to assist the reader with their personal growth and inner reflection. The strength of this deck lies in its beautiful artwork, and the vibrant colors that were used. Therein lies my problem with this deck … Edgar Allen Poe and I see ravens as beautiful black birds, not the colorful images that we see here do not match up with that.

In her introduction to the 128 page guidebook, Seilonen talks about the purpose of this deck, which is to inspire people to acknowledge the dreams that are deep within their psyche, and then to bring the dreams into conscious thought, so that they can be seen in the light of reality.

Ravens were used to give the deck identity after Seilonen observed them in their habitat in rural Maine, doing things like standing by the side of the road with a very Emperor like expression, waiting for the right opportunity to snatch a shiny object without drawing undo attention to himself from the other birds. The ravens are designed so as to inspire the creative spark through their bright colors and flowing lines. They are there to help you recall dreams of the past, congratulate you as you move along your life’s path, and help you celebrate your successes.

The cards are presented with a black and white scan, a description of the card, the card’s focus, and upright and reversed meanings. The Major Arcana shows a full page scan, while the Minor Arcana Pips and Court Cards vary – most cards show a half-page round scan, the Ten of Swords, the Knight of Cups, the Two and Five of Pentacles show a small circular scan in the middle of the page, while the King and Queen of Swords, and the King and Queen of Pentacles show a full page scan. The Page of Cups and the Ace, Three and Four of Pentacles show no scan at all.

At the end of the book two unique spreads are presented: Raven’s Claw, a four card spread, and The Raven, a six card spread.

The imagery in each suit is keyed to match the suit element (Wands/Fire, Cups/Water, Swords/Air, Pentacles/Earth. The bright colors are meant to enhance the card’s message. The cards are approximately 3 ˝” by 5 5/8”, of sturdy, glossy card stock. The card backs show a Ľ” white border, surrounding two ravens in flight, facing each other, against a purple background. The card backs are reversible.

The card faces show a Ľ” white border, with the card title across the bottom. The Major Arcana shows the card title, with no number. The Minor Arcana Pips (numbered cards) show the card number (in text) and the suit, while the Court Cards show the card title and suit. The coloring is watercolor, done in pastels, with the major figure or figures on each card being a raven. The birds are shown in profile, so that we are seeing only one eye. Because of the coloring, this comes across as a gentle deck. My preference would have been to stay true to the color of the raven, which is black. The use of color may take the reader deeper into the card, but for me it stands in the way. I would use this deck as a compliment to another deck when doing a reading, but would not use it as a primary deck.