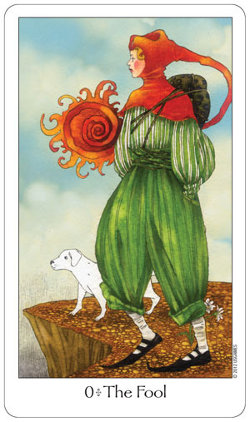 The Dreaming Way Tarot takes a fresh approach to the traditional Rider-Waite imagery and has 78 youthful, delicate and evocative cards. 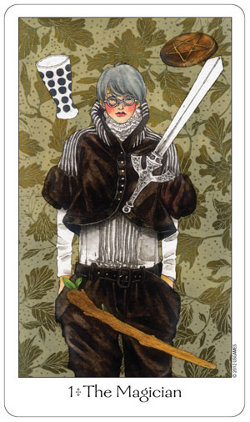 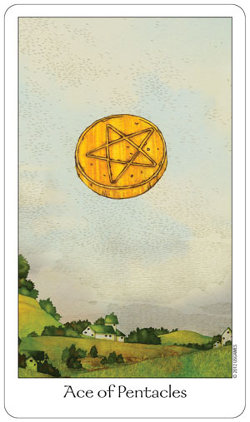 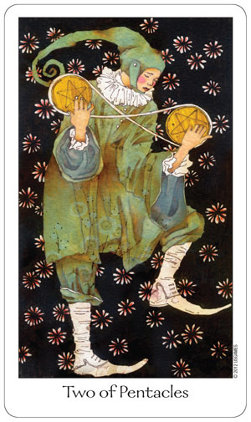 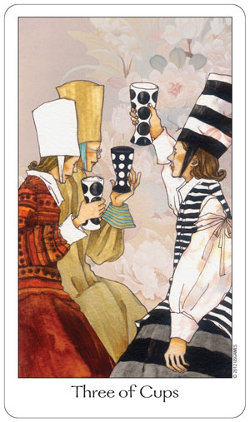 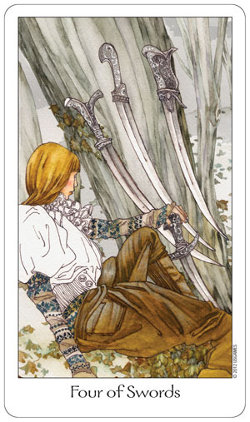 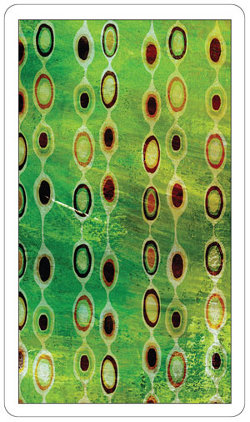 Dreaming Way Tarot is a new tarot deck from US Games. Dreaming Way closely follows the Rider Waite Smith traditions to the point that most people who are comfortable with the RWS will have no problem immediately reading with Dreaming Way.

Dreaming Way Tarot is a youthful deck. I think it will be very popular with younger readers especially. The art is very good. The faces of the characters are delicate and detailed. Many of the images are breathtaking and evocative. I particularly like the Aces, and the Judgment card.

The scenic backgrounds seem random. Some are beautiful color-washed tones. Others, for no apparent reason, are textured. Some have a repeating pattern that looks like old-fashioned wallpaper.

The costuming of the characters is curious. Many wear huge, elongated shoes. Some wear oversized top hats. The High Priestess is a young girl in a black top hat and white knee socks. It is images such as this which make me think this is a deck for someone much younger than me. In my tarot world, the High Priestess does not wear knee socks.

There are some striking contrasts in the art. Many of the costumes are colored in black-and-white checks. The Cups are of varying sizes and shapes, and they are decorated in large black-and-white polka dots. There are some images that just make me shake my head. Most notably, the Page of Cups is a sweet young girl in a dress, holding a black and white cup. Fish are swimming through the air. The image is lovely, except that the poor Page has a teapot tied to her head. What makes matters worse is that the LWB is skimpy, and does not give the reasons behind the crazy images. If I could explain to a client the symbolism of the teapot hat I would feel better about it. Another problem I have is the facial expressions of some of the characters. In some cards that are traditionally happy, the characters look sullen and morose. I am not sure how well my clients will react to a Ten of Cups where Mom looks like she is coming home from a funeral.

All griping aside, there is something really special about this deck. After looking through the cards a few times I decided that Dreaming Way was just not a deck for me. I put it to the side of my reading table to sit rejected until I had a chance to review it. Then I had a couple of telephone readings to do. I began each reading using my current professional deck, my trusty Hanson-Roberts. Early on in both readings, I felt the Dreaming Way call to me. "Use me! Use me!" it seemed to say. And so I did.

Here's what I discovered. The stark black and white graphics against the watery pastel washes evoke a lot of intuition. As a full-time tarot professional I could read with any deck and do a good job. But I must admit Dreaming Way made my job easy. I know that newborn infants react to black-and-white graphics. Maybe the inner child does too. Maybe the interesting and eye-catching images work to open the third eye. We know that the third eye is linked to psychic ability, eyesight and imagination. For me, this is why every tarot deck is so powerful. As the eyes view the tarot cards the images stimulate the imagination, the intuition and the psychic ability. It may be that these odd Dreaming Way images have some special ability to stimulate psychic awareness.

I am still more comfortable using these images for phone readings, where the clients can't see the cards. Over time, I may come up with my own explanations for the odd symbolism. Then I will be excited to take Dreaming Way Tarot on the road with me.

In the Introduction by the deck's author, Rome Choi writes, "I also realized that there was no evil in the world in the first place." That sentiment applies to the Dreaming Way Tarot, which is why I found it insufficient for practical application, because a tarot deck that does not contain evil cannot adequately read about a world that does.

The Dreaming Way Tarot is a modernist and whimsical interpretation of the Rider-Waite-Smith (RWS) system. Maintaining the suit names (Wands, Cups, Swords, and Pentacles) and court titles (Page, Knight, Queen, and King) it will be an easy deck to pick up for anyone familiar with the RWS. But beginning on the Dreaming Way for the committed tarot student is not recommended because it omits a significant amount of symbolism from the RWS that will make a transition from the Dreaming Way to the RWS or any other serious tarot deck a challenge.

Choi's deck is not for the professional tarot practitioner. It would, however, make a lovely and fun gift for a teenage girl. The soft aesthetic of Kwon Shina's illustrations are charming and precious. Key 13, the Death card is a very pretty card. Yes, that's right, pretty. It depicts a pretty young woman with a ponytail in a pretty black dress holding a scythe. There is an autumnal feel to the card, with the brown backdrop and outline of fern leaves. The interpretation of Death omits much of the symbolism and essence of the RWS Death card. Key 2, The High Priestess is depicted as an innocent young schoolgirl, lacking the spirituality and sensuality of most interpretations of the High Priestess. In the Eight of Swords, the woman isn't even bound. The Nine of Wands does not convey a man defending over and protective of his domain, chin up and haughty, but rather in Dreaming Way, he looks like a defeated man, eyes cast down, in a wifebeater and sandals. The Five of Cups shows the two filled cups in the foreground and the three spilled ones in the back, behind both human figures. To me, that seems to defeat the point of the Five of Cups. The plaid and checkered prints on The Emperor made no sense. I could go on and on, card by card. They were all very, very pretty, saturated with sweetness, but as a result, in all my readings with the Dreaming Way, the tarot's messages came across muted. Dreaming Way is a dreamer's deck, and not powerful at all.

I did enjoy reading through the little white booklet that accompanies the deck. Choi's introduction offered context for his interpretation. The glossary of card meanings were comprehensive and digestible, especially for novices. The booklet includes an overview of suit associations and basic numerology. Choi's Dreaming Way Five-Card Spread is versatile enough to answer both general and specific inquiries. I also appreciate how self-sustaining the deck is: armed with just its little white booklet, the tarot reader does not need anything else. No extraneous knowledge of astrology, the Kabbalah, Greco-Roman or Egyptian mythos, Hermeticism, or Neo-Platonism is required to read with this deck. It is so kind and compassionate that the prepubescent intuition is all that is needed.

Dreaming Way is a suitable tarot deck for answering the questions that a fair maiden may have of life, but for this weathered old crone, it just did not work. There are only two purposes I can think of for the Dreaming Way: reading for children at a party or as a gift to that fair maiden who likes to dabble with the tarot, but has no serious intent in it as a study.