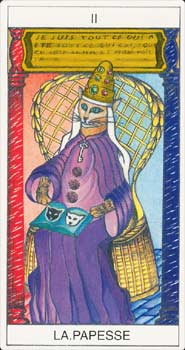 Also known as Tarot of Cats

This is a 78 card French Tarot devoted to, what else, cats! The tarot scenes in the Tarot du Chat are European style, and instead of humans they feature regular and anthropomorphised cats. 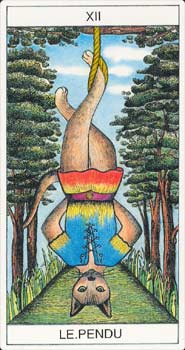 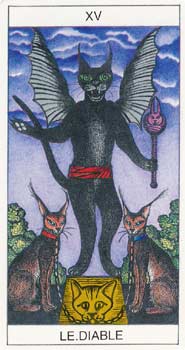 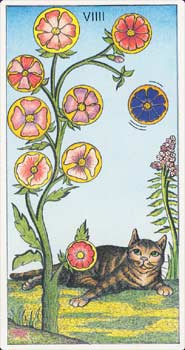 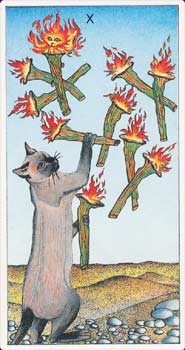 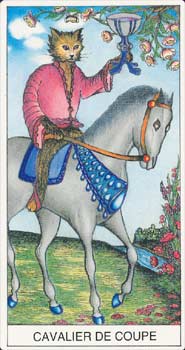 Tarot Du Chat or Tarot of Cats is a French deck based around the mysteries of Cats entwined with Tarot. The cards are 5” tall by 2 ˝” wide. The cards are mostly matte with a slight sheen and are small enough that they should be easy to shuffle for nearly everyone. The backs are solid purple. The deck comes with a LWB that is written in French, the Major Arcana are the only cards with labels besides the court cards, both in French. (Thank goodness I took 3 years of it!). The Major Arcana and Court Cards have cats that are anthromorphised while the Pips are regular cats. The deck according to the creators was based off the Marseilles decks. Pips are not highly illustrated but show cats in a variety of poses and actions with the suitable numbers of the suit symbol in an illustrated background. Each pip is usually a series of the same cat, background but advancing forward. Not sure what the artwork is but colors are used nicely. Backgrounds and setting are European.

In the Major Arcana 8 is Justice and 11 is Strength. They are all marked with Roman Numerals. Court Cards are in French but mean the following:


Suits are as follows:
Baton – Wands – Depicted with scenes of a Siamese type cat with flaming torches.
Denier – Coins – Denier’s were coins put through by Charlemagne- These are depicted with scenes of a Gray and Brown Tabby Cat and the Coins are actually Flowers.
Coupes – Cups – These cards show a white Persian type of cat near a pool of water (Emotions) and ornate golden goblets.
L’ Epee – Swords – These show a whitish gray cat with swords that have a gold end, maroon hilt and the “blade” is a gray cat paw with the claws coming together in a point.


Though this deck is written in French anyone picking up the cards can read with them. The creators of the deck make it known the deck is for reading but not to be taken too seriously. It is supposed to be a fun, light hearted deck to introduce you to Tarot. These cards fit that bill exactly. The numerical meanings are very typically of basic numerology – 1. Beginnings, 2. Duality and balance etc. The deck however is heavily based on the use of color. Anyone who has any knowledge of color therapy, color magic or just basic color correspondences will be able to read this deck and read deep meanings into the cards without any book meanings. The colors mixed with pictures work well for intuitive readings. The cards use heavy use of not only color but also body parts and clothes as symbols for the meanings. Examples listed below:


All the above gives you a sound key for recognizing the meanings of the cards. I love this deck as it is cute and fun but also full of meaning. Some cards in particular I like are Le. Mat (The Fool) which shows a cat in a jester hat and harlequin jacket with a dog nipping at his heels. In LeMat we see this play of color as symbolizing meaning. His shirt has all colors showing he is a mix of all. His hat is the yellow of intention and clarity. The bag on his stick is purple tome showing his higher self.

I also enjoy strength which shows a lovely picture of a female cat taming a dog. She is in a yellow and green dress of intent and vitality. She wears a red scarf and belt balancing the masculine and passion energies. Her arms which represent force are covered in brown which represents grounding and balance and her protective hat is a shade of purple showing her higher self and spirituality.

I love the 6 of wands card. In this card we show a cat that is white, black and grey of purity, transformation and solitude. He sits alone and stares straight into your eyes with blue eyes (Blue intuition and idealism and eyes representing intent and focus). He holds three flaming wands up and 3 flaming wands are on the ground under his paw being held down. This card is often about acting on intent, problem solving, victory. This to me shows the cat has made his decision on what requires action and what doesn’t. By choice he is confident and has found balance. I also enjoy The Moon which shows us a card set mainly in deep blues. We see two dogs looking into the moon that holds a curled up cat. The cat gazes down on them with one deep yellow eye. This decks idea is that the Tarot along with Cats both embodies mystery and with the cat being in The Moon itself this card to me represents the idea of the deck. The unspoken, the illusions, and that which is held by the unconscious self.

All in all the artwork is simple yet nice to look at. Fun yet meaningful. While the deck is light hearted I don’t feel this detracts from the deeper meanings of the cards. For anyone with an understanding of color theory, love of cats and the desire to use your intuition, you will find this deck a keeper. This would also be a great deck for anyone of any age as there are no dark, scary images nor any nudity. I wish this deck were still in print as it is a favorite of mine and I see it as an asset to any readers collection.