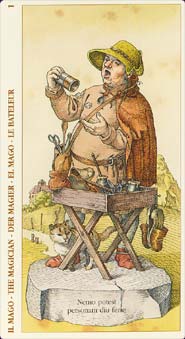 Created in the style of Albert Dürer's paintings and engravings, the 78 fully-illustrated Tarot of Dürer cards include heraldry and animals as allegorical symbols.


Card Images from the Tarot of Dürer 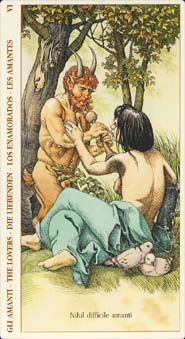 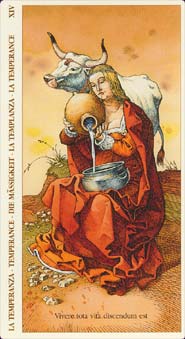 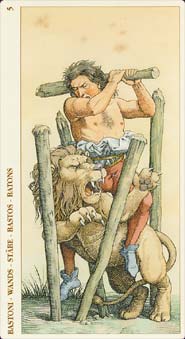 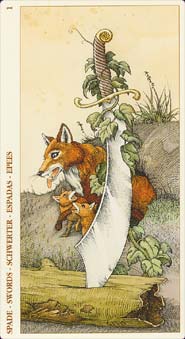 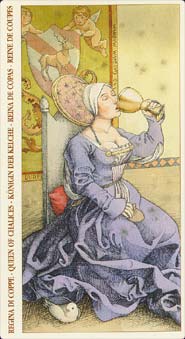 Tarot of Dürer Review by Solandia

The Durer Tarot pays homage to the German artist of the Renaissance era, Albrecht Durer, who was famous for his paintings and lifelike engravings and is believed to be the 'best engraver of all time'. Contemporary artist, Giacinto Gaudenzi 'filtered the interpretation of thinking' of Durer's time and produced divinatory cards that are inspired by Durer's engraving style, but are not slavish reproductions.

The majors are decorated with a Latin motto, the translation of which is provided in the companion booklet, and incorporate animals as allegorical symbols. The Magician has a cat, the Pope a snake, the Empress a Monkey. A rooster watches the Hanged Man, pulling the Chariot is a donkey, and accompanying the Hermit is a turtle. The minor suits correspond to a 'metaphor' of an animal. Chalices are associated with Doves, Pentacles with eagles, Wands with Lions, and Swords with Foxes.

The artwork style across the deck features the highly detailed backgrounds, and delicate, muted and natural colours - dusty greens, blues, reds, hazed skies and rain. The cards have a strength and beauty, even if some scenes can appear a little earthy. Some cards are comical, bordering on bawdy. The Fool pokes his tongue out at us as he pulls down his pants and shows us his backside. The naked-breasted Queen of Pentacles looks out at us lasciviously. And then there is the Lovers card, on which Pan plays the pipes for a human woman with his apparent excitement cleverly disguised behind a spray of leaves. (I didn't notice this at all until I'd looked at the card quite a few times.)

These cards might be confusing to someone used to standard Rider-Waite-Smith meanings. A little Visconti or Marseilles knowledge comes in handy, but even though, some cards still don't quite make sense to me when compared with the book's meanings. To me, the 3 of Cups image is ambiguous, a boy reaching for a dove in a tree, a falling cup beside them. The text states the card means 'success and satisfaction'. The already-mentioned Queen of Pentacles is another - the meaning given to the image is 'a generous woman with a noble soul'!

Other cards have had their meaning emphasised. Judgement literally shows the dead climbing from their tombs in response the trumpet call on Judgement Day, and the man pierced by swords in the Ten really does look like he has been violently stabbed, with gaping wounds and blood on the sword blades.

These minor differences, however, don't affect my enjoyment of using the Durer deck. The Fool image can be off-putting when seen as the first card of seventy-eight, but don't let it overly contribute to a negative impression of the entire deck.


Complete Details of Tarot of Dürer


Similar Decks to Tarot of Dürer