The Efflorescent Tarot (efflorescent meaning 'bursting into flower') is based on the Rider-Waite tradition and comprised of its own illustrated world of characters, objects and places. The 78-card deck is currently available from the artist through Etsy (in full-colour or black and white versions), and is also seeking a publisher.


Card Images from the Efflorescent Tarot 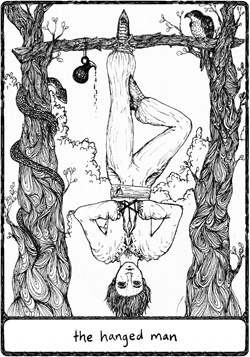 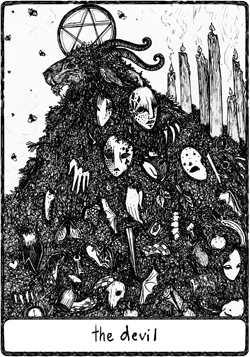 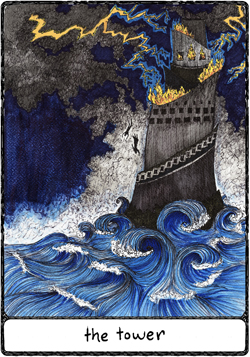 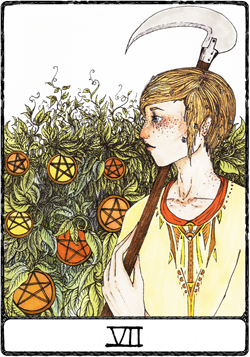 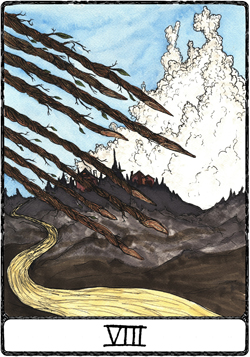 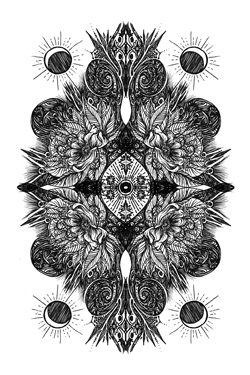 The Efflorescent Tarot captures a gentle and delicate world infused with a sensitive and oftentimes dreamy energy. This is the self-published creation of artist Katie Rose Pipkin, predominantly molded in the Rider Waite Smith (RWS) tradition.

Efflorescent means ‘bursting into flower’, and so a number of cards in the deck make this a central theme. In some cards, such as the 6 of Cups, it seems as if flowers are the central focus of the whole card, and the two protagonists are enmeshed in their world. In other cards such as the 7 of Pentacles, you need to look closer to realise the presence of small, diminutive flowers is weaved and entwined in the gardener’s hair.

The majority of the cards, however, do not feature any flowers at all, although many are rich with verdant abundance, and often carry a distinct, palpable lushness – thus leading us to feel that the artist has infused efflorescence throughout all of life and living, not just flowers.

The artwork medium consists of carefully thought out ink drawings, and this deck will have a high appeal to those who prefer ink and paint to digital collage. The cards have a reversible, intricate and detailed black and white back, reminiscent of a flowering fractal, with four crescent moons framing it.

Overall, the deck keeps to the traditional RWS meanings of the cards, however, as with most tarot decks, the artist has taken the liberty to add some variations throughout. These, I feel, mostly add to the RWS themes, rather than detract from them. For example, the Fool is shown blindfolded, adding another layer to the card’s central theme of listening to your heart and taking risks, even though your mind may well try to dissuade you from such foolish acts. Taking a step into the abyss blindfolded, our querent emphasises that our dear Fool is trusting his or her heart to make such a decision - this is another variation, in that the RWS Fool has both feet on the ground, whereas the Efflorescent Fool has already taken a step forward, with only one foot remaining on the ground. Another example is the 7 of Cups, where the querent is actually reaching out and almost taking one specific cup – in this instance, the cup with the winning laurel wreath. It seems that in this card, there is no confusion or indecisiveness – they have made their choice out of all the possible offerings, and are willing to grab it.

Personally, I have found the deck to exhibit a palpable melancholy one can see and feel in some of the cards. The Empress, for example, looks sad and forlorn, as does the High Priestess. The two characters in the 10 of Pentacles exude a rather gloomy energy, also noticed in some of the court cards, most notably the Pages.

The cards come in a simple white box, and there is no little white book. As this is a self-published deck, the white box will have one of the cards attached to the front, as chosen by the artist. The cards have a traditional white border around them, and the card stock feels reasonably sturdy, with a matt, rather than glossy, texture (thus I would be very cautious handling these near water or other liquids).

Overall, this is a thoughtful, beautifully painted deck that stays true to the RWS tradition. It carries a gentle, graceful energy throughout and can be used by both beginners and experienced tarot practitioners alike.