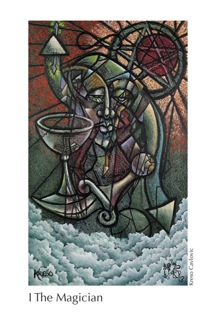 The Elora Tarot is a collaborative deck created by 65 artists from the small town of Elora, Ontario in Canada. Each artist created up to three cards in their own choice of style and medium. The 79-card deck (it also includes a Happy Squirrel card) is self-published by group coordinator, Shelley Carter.


Card Images from the Elora Tarot 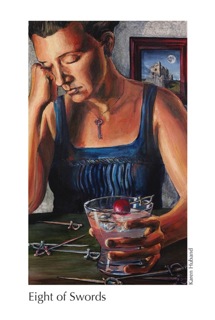 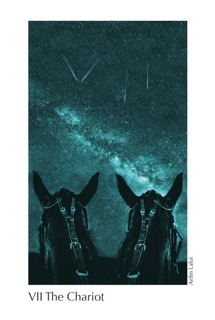 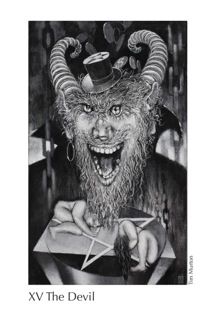 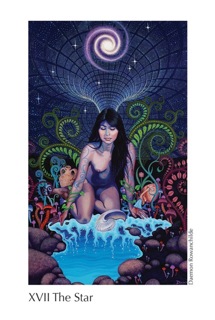 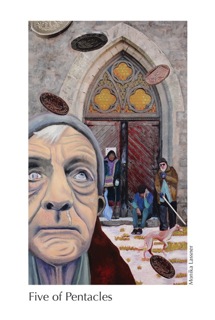 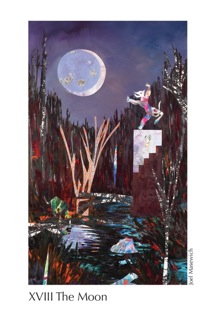 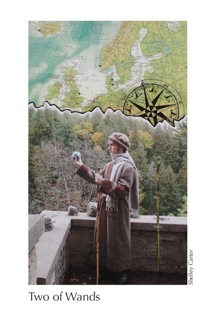 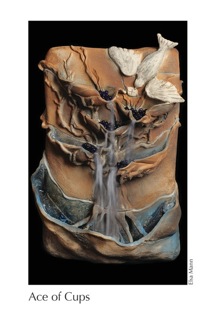 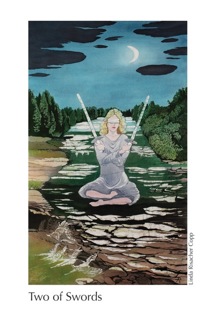 Shelley Carter was inspired by many things; travel, adventure, history, art, Tarot collaboration and a strong sense of community. It is also a beautiful, well-made set. The project coordinator Shelley Carter; a Tarot reader and art-history buff, had specific goals in mind when she decided to take on this challenge. 1. To create a meaningful, useable Tarot deck for readings and meditation. 2. A deck that would also serve as a mini art gallery showcasing the individual artists of her small community. 3. To also bring these creative individuals together for a unifying purpose that would create a cohesive and meaningful work as a whole. 4.Bring attention to the beauty and uniqueness of the idyllic village of Elora, where they all live and thrive.

Having gone above and beyond to achieve these goals Ms. Carter could be found celebrating along with the artists and their friends at the Deck Launch & Art Exhibition in the Wellington County Museum on Friday the 13th of September (2013). So much positive energy and momentum for this group endeavor had been rallied that the town's Mayor officiated the ceremony. Most of the art is well executed and Tarot inspired while also being impactful and/or aesthetically pleasing; whether it be painting, photography, sculpture, or mixed media. Quite a few cards in this deck share unusual and refreshing perspectives, such as the 8 of Swords. The artist Karen Huband shared this in the LWB:

"I think many people experience the stagnation that this card represents at some point in their lives. We are capable of shifting and moving forward yet we may be afraid of the energy required to change. Though we no longer carry swords on our belts; I do see a few floating around in cocktails. I felt the drink could represent a failure to move forward; a substance that can keep us blind to possibility. For the source card (Waite-Smith - 8 of Swords) I retained the castle, now a photo of a ruin, and the binding around the figure in the subtle roping of the dress fabric."

It is also worth mentioning that the elusive Happy Squirrel card (which is an affectionate nod to the Simpson's episode when Lisa went to a Tarot reader) is beautifully rendered by artist Julie Denneny for this deck. The coordinator's attention to detail can be found in many other ways such as making the cards large to better enjoy the fine art details. And adding each artist's name to their card in an unobtrusive manner; giving them that extra bit of honor and recognition.

This set is offered in two forms: a standard version which includes a 79 card deck (with bonus 'happy squirrel' card) and an interesting 80-page booklet of each artist's approach and process. This comes shrink-wrapped in a cardboard envelop-style box with velcro closures. 500 limited-edition sets come in fancier boxes and are autographed by most of the artists. Shelley Carter in Her Own Words...

"A Tarot deck is a perfect venue for a group project – each card is an individual work of art on its own, and then becomes part of a larger piece as a collaboration. There was magic at work when the community got together and created something extraordinary."

This deck was created only a few miles from where I was living at that time and Shelley Carter is a dear friend and colleague. I just wanted to make my biases clear right at the beginning of this review. I was only privy occasionally to the trials, inspiration and manifestation of this magnificent deck but I leave it to the reader to imagine the excitement and strife of pulling a whole community together to create a tarot deck!

Elora is well known in Ontario and among artisan circles across North American to be an art-rich community. It’s a beautiful place to visit and indeed thousands of tourists flock there every year to hike along the gorge and visit the multitude of galleries and shops lining the streets of this lovely town. It is a magical place and perfect for a back drop to the creation of a tarot deck. If for no other reason than the fact that a whole community of 65 artists were brought together by an extraordinary Tarotist to create this deck, as a collector you must have a copy on your shelf. That is truly its soul and magnificence.

What I love most about the deck itself is the fact that it was created by 65 different artists. Each card is done in a truly unique style and every Tarotist will have their favourites! Many of the artists used multimedia materials to create their renditions such as the Fool card by Eric Allen Montgomery. He brings “found object assemblages”. He “is fascinated by the memories equally triggered by society’s cast offs and coveted treasures” (Quote taken from the accompanying book). But like all Tarotists of course I have my favourites such as Rick Worthington’s painting in oil of the Empress and Arlene Saunder’s watercolour painting of the Emperor. This is a Royal couple you would like to have for friends. They have delightfully constellated all their aspects of greatness, warmth, kindness and parentage.

The Lovers depicts two women in a soft embrace, The Hermit depicts Van Gogh, and The High Priestess is a collage including a photo of a real and beautiful young woman sitting in what appears to be in the woods at night cautioning the viewer to hush. I don’t have enough room to point to every card but these are only a few of the highlights that are original, appropriate and inspirational.

The pip cards are all just as colourfully and thoughtfully depicted: The 8 Swords depicts a young woman sitting with what looks to be a cocktail in front of her, the swords represented by the swizzle sticks scattered on the surface in front of her; the 3 Cups depicts three women in shadow passing water from one cup to another in three circles of bright orange and red suggesting a campfire; 5 Pentacles is a delightful painting depicting a close up of an aging person (woman?) in the foreground who looks blind and is clearly isolated from the people gathered on church steps in the background. Some of the pips are difficult to describe and may be even more difficult to associate to the Tarot but that’s where a future book on this deck will come in handy!

Physically the deck is larger than usual, brilliantly coloured and well laminated for long use. It comes in a sturdy box which is held closed by a small circle of Velcro. The book respectfully gives tribute to each artist and describes materials used along with a brief description of each card’s meaning. This deck however, calls for a much more comprehensive book to be written and I have a feeling (with enough urging on all our parts!) Shelley will be doing just that in the future. I for one would love to know the rationale behind each artists’ interpretation of the card, the process of bringing a community together to do this project as I’m sure there are other Tarotists in the world who would love to do just that.

I think this deck is a must have for any Tarotist looking for something different, something that took an enormous amount of energy and synergy to create and would not surprise me to learn in the future has become a true classic both inside and outside Tarotist circles.

Join our Newsletter and get Free Tarot Spreads
We'll email you our 15-page eBook now, and you'll receive updates and featured decks from us in future.