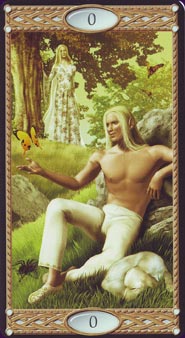 Tarot of the Elves

The Tarot of the Elves doesn't just picture pretty elves in costume. It's been imagined as a deck that an elf might consult, one that explores a unique elven universe. The artwork is slick and computerised, and the cards are without printed titles - unusual for a deck from Lo Scarabeo. To be available as a standalone deck, and with a book by Mark McElroy.


Card Images from the Tarot of the Elves 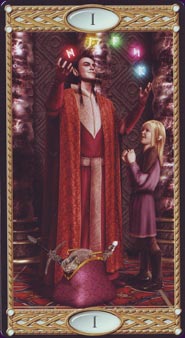 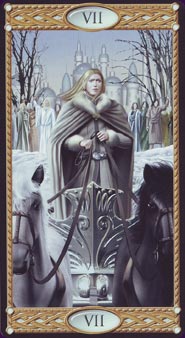 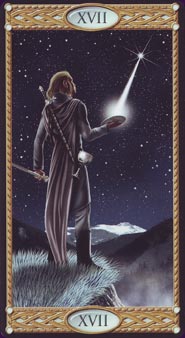 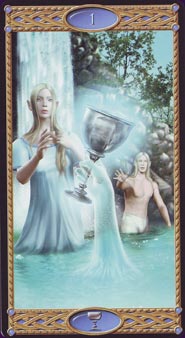 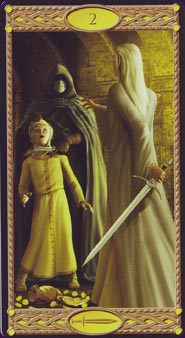 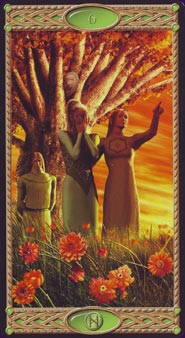 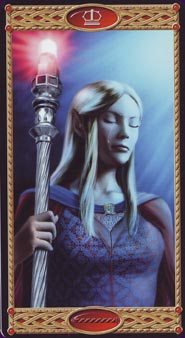 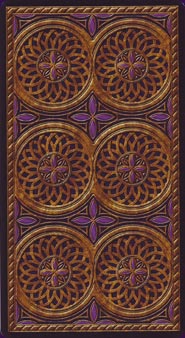 The Tarot of The Elves will throw you into the midst of the faery world with its storyline, beautifully realistic artwork and provocative, emotional portraits into Elven life.

The deck takes a nontraditional turn, as the whole deck follows the story of four sacred Elven relics. The minor arcana each have their own relic and element (Wands=fire, Disks=Earth, Chalices=Water, Swords=air); which tell us how these sacred items came into being and found their way into the Elf King's hands. While the major arcana then follows the story of how they were stolen by a Dark Elf sorcerer and ultimately retrieved by Prince Alberich. Those of you who are familiar with mythology and poetry will find very familiar names in this deck taken from Elven lore, or the works of Shakespeare himself. Now, each card has a small part of the full story to tell and its own morals within it, however when you 'read' the story as a whole, is when the ingenuity of the deck truly shines.

The major arcana (O - XXI) follow the story of the elf Prince Alberich and the dark elf Dokkalfar that takes place after the stories in the minor arcana. Dokkalfar implements a plan to steal the four relics, in which he murders Alberich?s parents; his mother the priestess slain in her own temple and his father, king Oberon, turned to stone in his throne room. Thus, Alberich must leave his isolated, comfortable life, his wife Ellyll, and leave his home in pursuit of Dokkalfar and the sacred relics. Each card of the major arcana reflects a specific event in his journey, which ends with his retrieval of the relics, and Dokkalfar's banishment from the kingdom.

The minor arcana generally follow the Rider-Waite system with a few distinct changes. 1) The Ace cards are taken as one; 2) There is only ever one representation in each card - for example: the 5 of Wands depicts a civil war in which the suit's main character, Selomir slays a young elf with the wand. His wand is the only staff-like weapon in the fray; and 3) they follow four distinct characters and/or their family, instead of scenes from the lives of many different people.

Now, the way I read is very remarkable in the sense that I rarely, if ever use a formal spread. I draw the cards where they feel they should be, but this deck has inspired me to create some very interesting personal spreads based on elven dances, that have proven to work extremely well. However, even without them, this deck is remarkable in its accuracy and insight; it provides conventional answers to conventional questions, and meaningful answers to meaningful questions. Oftentimes it even shows a significant background influence that was not keyed in upon - or even known to the client. While some of the images can be rather grotesque to clients of delicate sensibilities (I remember someone in a tarot group I went to said the Five of Swords looked like something out of a horror film), I still stand by it as a safe choice when conducting business readings. The beauty and sometimes-comic scenes in others offset the very few bloody images, for instance in that same group previously mentioned, someone commented that the character in the Knight of Chalices looked like a blonde Ozzy Osbourne. The back of the cards is a beautifully symmetric arrangement of knot work style stone carving that is very hypnotic to look at.

All together, I can say with confidence that this deck was well worth the money I spent on it and would be a great addition to any tarot collector, or reader's library of decks. It is truly a deck that an elf would use.