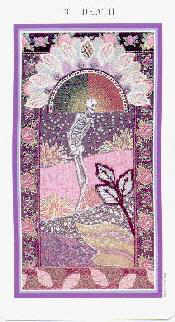 The unique artwork in the Enchanted Tarot is made with fabric, by quilting and applique. The cards are intricate and highly patterned, in soft greens, purples and pinks, and the effect is quite attractive.


Card Images from the Enchanted Tarot 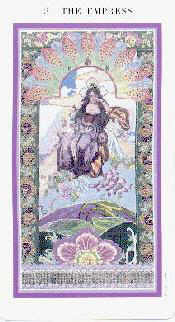 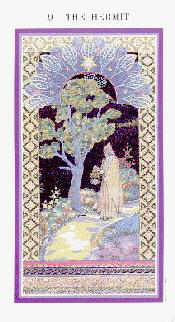 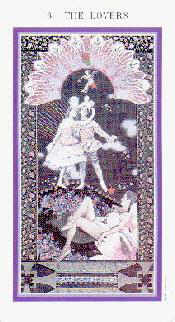 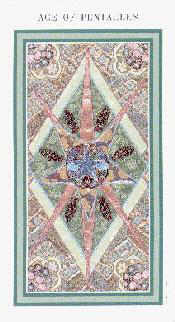 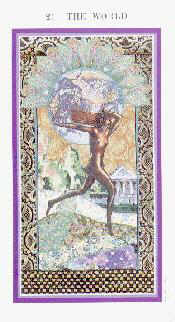 This deck came to me in a bit of an unusual manner. I have wanted it for a long time, but never bought it. Then I had the chance to purchase two decks, brand new, at a very reduced price from an internet friend - and proceeded to do so. I will be ever grateful that my friend did not resonate with this deck - because I certainly do!

Where to start - with the book or the deck? They are both top quality, outstanding products. The book is hard cover, with full page, full color illustrations of each card. I was amazed when I saw this - and did not want to put the book down! The text is gently written by Monty Farber, and addresses both of our worlds - that of Dreamtime and that of waking time, and the Higher Self that each of us carries with us through both of these worlds.

Monty goes on to talk about the methods that people have used to access Dreamtime, while remaining in the waking state. He states that the Tarot is a unique tool in that each of the 78 cards carry messages to both our conscious and unconscious selves. Tarot and the visual arts take us beyond cultural differences into another world.

The interpretation of the cards for the Enchanted Tarot is done in a manner that I ahve nto seen elsewhere. The approach is threefold: levels of consciousness terned "The Dream", "The Awakening" and "The Enchantment". In The Dream, Monty presents a gentle fable that shows us the allegorical meaning of the card (very similar to the Inner Child cards).The Dream is such that each time you interpret the meaning, deeper knowledge comes to you.

In The Awakening, the same information is brought into the conscious realm through a straight forward discussion of the card (which would be the interpretation section, in most books). In The Enchantment, we see the connection between our waking world and Dreamtime. The Enchantment is actually an exercise that will allow you to put the energy of t he card to use in your life.

At the end of the book is a short section on how to prepare for a reading, including tips on how to formulate a question in the best manner possible. Templates are presented for doing one and three card spreads, as well as for doing the Celtic Cross spread.

The cards themselves are a bit "over-size" at 3" by 5 1/2". They are difficult for small hands to manuver with - but - where there is a will, there is a way! The backs are white, with a narrow gold border about 1/4" in from the outer edge. In the center we see two solid gold hearts, eachsurrounded by a thin gold outline of a heart. Surrounding the hearts are two swords and two wands, with a solid gold star at each of the four directions.

The face of the card has a white border of approximatley 1/4", followed by a dark orange border, a slightly wider light orange border and another dark orange border. The pictures themselves are of a collage nature, done in multiple mediums, including oils and fabric. The card title appears in black on top of the card.

One of the first things that I noted when going through the deck was the lovely use of lace. Sure enough - Amy Zerner thanks a specific person and store in the beginning of the book as a resource for her lace. I liked the lace so much that I ventured into Victorian lace land online - which, one of my friends pointed out, could be dangerous!

Each of the suits is color coded: Wands are red, Hearts are purple, Swords are blue and Pentacles are green. In general, the color scheme used throughout this deck represents the healing qualities for each element and card. The

Enchanted Tarot is exactly that - a gentle, enchanting deck. The Three of Hearts (Cups) shows a ballerina reflected in a series of mirrors, holding a gold heart over her head. The Princess of Swords shows a lovely Victorian type lady standing in nature reading a letter. The Two of Wands shows a male figure, alone on a mountaintop, leaning on his staff. Above him are two crossed swords, with a butterfly over them. One of my favorite cards in this deck is Death, which is depicted as a skeleton standing up, with his hands in his pockets and his legs crossed. Clearly, you expect him to start dancing at any moment!

I am into masks lately, so the Devil in this deck is another favorite. Here we see a mask, with dark horns and slitted eyes, looking down with obsession at the material world. From the book:

This us the face of evil. Blinded to his spiritual The Devil looks down on his treasures, his slitted eyes in complete obsession with and surrender to the material world. His ill-gotten gains are of no real use to him though, because his fraud and trickery have driven all companionship away. The Devil expresses the worst side of human nature; following decadent impulses blindly and judging things only for their surface value. This is the dark side of the soul, ignorant of what is real and valuable. The Devil, with his scarlet lips and black horns, is the creature of nightmares and paranoia. Under his influence, fear of the unknown becomes daunting. Restless undercurrents flow, irritating the appetites adn demanding instant gratification. All love is lacking in the Devil, for he views it as a sign of weakness. Though he may simply be mischievous at times, he will try to take advantage of any situation and cannot be trusted. He sets free only those who choose to see beyond t heir own material desires.

If you need material objects to make you feel good about yourself, then you must feel empty and afraid that you will be recognized as such. You need to change the emphasis from physical concerns, to those of spirit. Your bondage is the result of your limited beliefs about the world. You have within you the power to change your beliefs, using visualization, affirmation and actions in harmony with the natural law. You don't have to resort to deceit.

You may need some spiritual cleansing now. Crystals have the power to help heal and balance us. Choose either clear quartz or amethyst. Purify the crystal by washing it with salt water. Wipe it dry with a silk cloth. Hold it to your lips and chant: "I wish to transcend my obsession. Help me to see love where I see temptation." Place the crystal on the Devil card.

I highly recommend this deck to all levels of Tarot practitioners. It can be used by anyone, in any setting, and very much opens up the meaning of the cards for both the reader and the Seeker.

I have been using the Enchanted Tarot deck for eleven years. I find the images both intriguing (still) and evocative, and at the same time soothing. When I use decks that are too brightly colored or too boldly illustrated, it seems as if the artist's feelings are crowding the reading, and I get distracted. This deck is so subtle! And yet within each card there is always some new insight to be gained by gazing... the artwork is layers of fabric, collage, paint, etc. and the lightness of the work is good for the soul. Apart from that, the cards themselves are high-quality oversized heavy cardboard, and the printing is lush. They are lovely to behold.

One thing to mention: the deck has 82 cards. There is a King, Queen, Prince and Princess of each suit! The Princess is quite different that the Prince or the Queen, and having the ability to use the Princess card adds yet another level of refinement and distinction to a reading.

The book that accompanies the deck is also a delightful tool. It's hardbound with pictures of the cards on the left pages and interpretations on the right pages. The interpretation of each card is broken up into three phases: "the dream", in which the scene on the card is described in story form, "the awakening", in which the themes/lessons of the story are more directly stated, and "the enchantment", a simple spell for the reader to use to focus his or her energy in matters to which that particular card is relevant. I must admit I haven't used the "enchantments" at all, but they are in line with mostly accepted new age-wiccan practices - natural items used in ritual for energy focusing.

I've had a number of startlingly accurate readings with this deck over the years, and I think much of my reading clarity can be attributed to the gentle nature of the artistry. They aren't cubist, they aren't photographs, they aren't distracting or transporting; they are simply light, beautiful art meant to convey, softly, a message prescribed by the traditional cards of the tarot and let the reader do his or her thing.