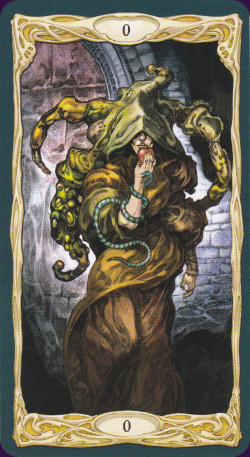 The Epic Tarot is a rich, creative deck of high fantasy imagery illustrated in a sophisticated graphic novel style, It's a relatively non-traditional deck of 78 cards with a sword-and-sorcery theme and a powerful feel.


Card Images from the Epic Tarot 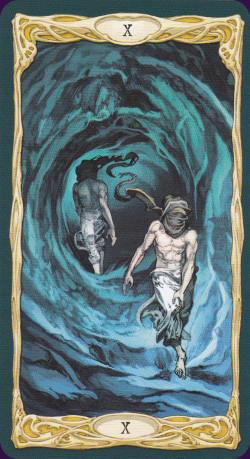 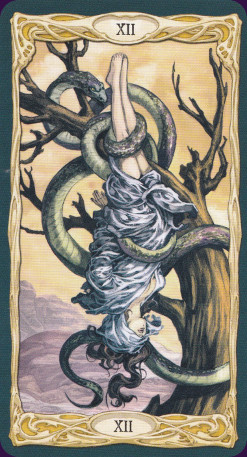 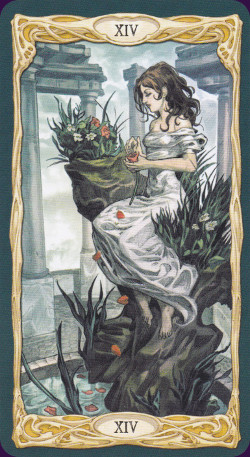 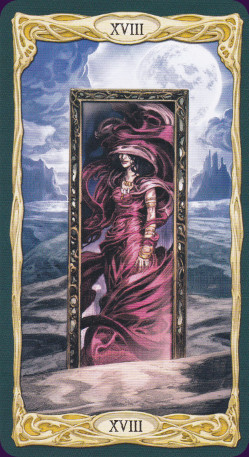 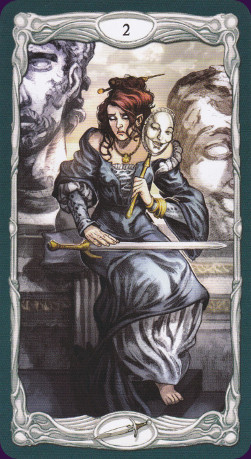 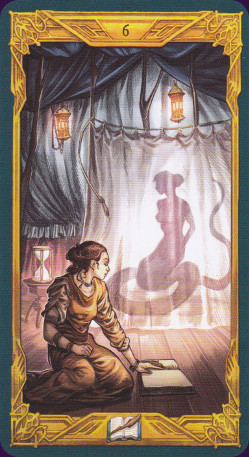 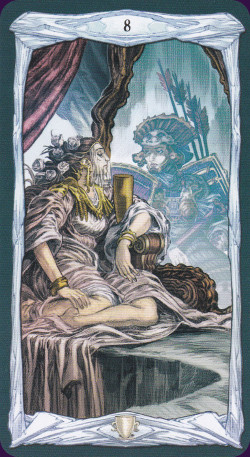 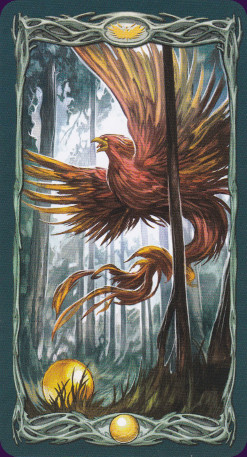 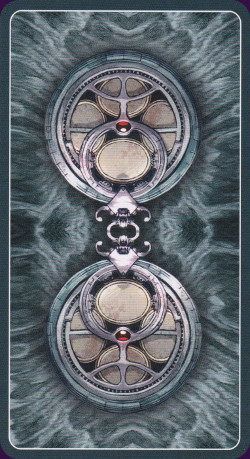 Fantasy tarot decks are part and parcel of the oracular card world, from themed decks such as Lord of the Rings, dragons, faeries, elves, witches and wizards, hobbits, goblins, mermaids, as well as decks featuring the artworks of noted fantasy artists such as Paolo Barbieri, Anne Stokes, Nicoletta Ceccoli, Nekro, Luis Royo among others.

The Epic Tarot is definitely part of this high fantasy continuum, in fact it is such a well conceived deck that it is fair to say that it is a significant entry into the genre. The Epic Tarot is situated in the world of sword and sorcery – a place of mythic creatures, magic cities, haunted landscapes, ghosts, genies, gods, wizards and phantoms, heroes and heroines, enchantresses and seductresses, the weak and the strong.

The Epic Tarot is a 78 card fully illustrated deck, with a 22 card Major Arcana and 56 card Minor Arcana. The Major Arcana is divided into sections representing the Material, Intellectual, and Spiritual realms. Each Major Arcana card is given an alternative and suitably fantastical designation (not printed on the card) such as the Lady of Visions for The Hanged Man, The Sacred Beggar for The Hermit, The Saint without Guilt for The Hierophant, The Eternal Soldier for The Chariot.The Fool sits outside these designations and represents the Seeker as they move through the epic adventure of their life.

The Minor Arcana has four suits (Chalices, Pentacles/Spheres, Wands/Books, Swords) consisting of 10 number cards and four Court cards. The Minor Arcana too have alternative titles which describe the essence of the card e.g. The Secret Sword is the 7 Swords, The Chalice Shared is the 2 Cups, The Sphere Achieved is the 9 Pentacles, The Book Opened is the Ace of Wands.

The Court Cards have mythic creatures taking the place of human royalty – Pages have become Unicorns, a Knight is now a Griffin, Queens are Phoenixes, and Kings are (predictably) Dragons. These are not cute and charming beings but rather strong, stern, and quite forbidding. The cards have no titles, the Major Arcana has only Roman numerals, and the Minor Arcana has a number and symbol to indicate their position and suit.

The cards measure 65 x 120 mm – which makes them fairly standard for Lo Scarabeo whose decks tend to be sized like elongated playing cards. They fit nicely into one's hands and have a good weight to them. They shuffle very smoothly and are incredibly easy to handle. The card stock is excellent – light and flexible, with a low sheen finish and even texture. These cards are made to be used and to function optimally. The print quality is excellent – the images are clear and crisp, with no blurring or misprints. The fine details and subtleties of colour are beautifully reproduced. The artist, Paolo Martinello, tends toward a darker palette of brooding greys, greens, blues, offset with infernal reds and golden yellows.

The artwork is rather reminiscent of graphic novel illustrations – commercial, imaginative, dynamic, and far beyond mere cartoons. There is a richness of detail rendered deftly (and with great self-assurance) in pen and ink. The images are creative and striking, full of arresting symbolism – the towering statue in Justice, the mysterious Japanese couple in the 2 Cups, the forbidding black night from the 5 Spheres to describe but a few. Each image has an element-appropriate frame – Swords has carved bone, Books has geometrically structured gold, Chalices has sharp ice, Spheres has twisting green wood, and the Major Arcana has organically carved blonde wood. Outside the frame is a deep green border of narrow proportions. The print on the back of the cards – interlocking discs of silver, stone, and jewels – looks almost Steampunk, and is fully reversible.

The cards come packaged in a close fitting, sturdy cardboard box printed with images from the Epic Tarot deck. While it is handy for storage it will not withstand rough treatment without wear and tear.

The 63 page little white book has instructions in English, Italian, Spanish, French, and German. Barbara Moore, one of the foremost experts, authors and creators of tarots today has written the instructions. Moore’s progressive interpretations are as insightful as they are prescient. The divinatory meanings given in a Little White Book contain both spiritual and prosaic advice – some of it is a little oblique but the bulk of it is direct and unambiguous. There is no guide to the illustrations so the Seeker who needs a specific instruction may feel a little lost, however those with vivid imaginations will be able to intuit and/or create back stories for the images.

The Introduction leads the Seeker into the world of the Epic Tarot and defines some of the guiding gods and principles of the deck; Magic, Knowledge, Receptivity, Creativity, Love, and War. There is a small but fascinating guide to Advanced Study; followed by a 6-card layout suitably called The Epic Tale of Your Life. This is fittingly couched in epic-fantasy tropes – challenge, reward, and worthiness.

This is a surprisingly powerful deck with unexpectedly potent images. Given the frequently forbidding illustrations it is definitely a ‘Dark Tarot’. If you have an interest in fantasy art which eschews the comforting cuteness that compromises the strength of many fantasy tarot decks then you need to check out the Epic Tarot. If you like ‘Dark Tarot’ decks then this one is a must have; and if you are looking for a deck of unusual intensity consider the Epic Tarot. This is not a deck for beginners – there is very little traditional tarot imagery or symbolism, but adepts will find it relatively easy to master.

The Epic Tarot is an unexpected gem from Lo Scarabeo and highly recommended.