Golden Tarot of the Renaissance 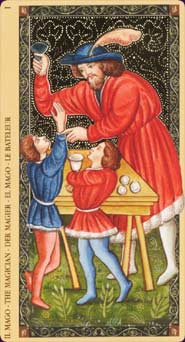 The Golden Tarot of the Renaissance is based on the fifteenth-century French deck, the Charles VI (also known as the Estensi) of which only 17 cards remain. Lo Scarabeo's full set of 78 cards have been created in attractive watercolours and finished with a gold leaf background.


Card Images from the Golden Tarot of the Renaissance 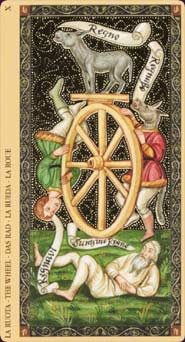 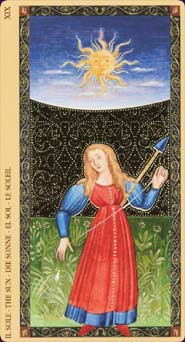 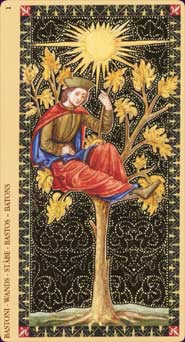 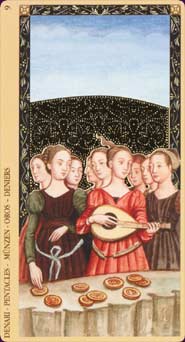 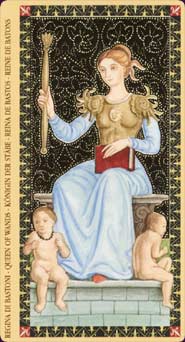 Golden Tarot of the Renaissance Review by Cerulean

It is always the proudest man
whom Love defeats and subjugates
No strong arm, no audacity,
no blade well-honed, no shield or mail,
no other poet can avail
for in the end, Love conquers all.

Above, the courtly tarocchi poet of Ferarra was writing to his second chosen patron, Duke Ercole D'Este, with encouragement from courtly ladies that included the Duchess of Mantua, Ercole's daughter. The epic poem Orlando in Love (Innomorato) and poet was rediscovered and celebrated in 1994 with various conferences and even a tarocchi game.

Some five hundred and ten years after Boiardo's death, the Estensi Tarot is to be relased in 2004. This a golden tribute to romance and destiny, a revival of a supposed Ferrarese courtly game. While Boiardo and the courts of the Estensi developed various games of poetry and gilded cards, the original cards inspiring this deck--now housed in Paris--have not been attributed to any Estensi ruler. Sixteen of the cards had been misnamed "Charles VI" from a mistake by a 19th century historian. Other suggested points of North Italian origin are attributed to the deck, which might include Milan or Venice, depending on the historian. However the abilities of the Ferrarese goldsmiths and styles of art and costume circa 1470-1490 point to this area of Northern Italy.

In the spirit of tribute to Estensi origins, Giordano Berti wrote design instructions for the majors and minors of this deck. I found the 16 restored cards in the deck close in color to the aged originals as seen in art history books and catalogs. Note that the structure of the deck is traditional Italian, which means Justice is the eighth trump and Strength is the eleventh trump.

I have yet to identify the models for five of the newly designed majors not found in the original deck. These are the High Priestess, Empress, Wheel, Devil and Star.

There's a humorous bent in the Wheel, which has a satirical two-legged donkey climbing with the motto "I will reign". A four-legged donkey on the top of the wheel braying that he is reigning. The young man descending the wheel and the old man laying at the bottom of the wheel also have appropriate mottoes.

The Devil has a pair of shorts with a wicked mask attached in front. The Stars is also a likeable design of a young Venus holding a long arrow. Small fish and seashells and a distant ship accompany her. An eight-pointed star glistens above her.

The minors are also a fascinating puzzle to me. However I've matched about 44 of the 16 courts and 40 suited cards from the Schifanioa Palace frescoes. Berti briefly touches why he chose the fresco designs in the little white booklet (LWB). His small discussion of the history and outline of the deck is fascinating to me. I wish for more details from the ever-poetic Berti.

Berti directed the artist based on the historic Schifanioa frescoes in Ferarra, painted by major artists of the Ferarrese school circa 1469-1472.

Let me elaborate a bit more on the history of the frescos and their significance from my resources.

The artists Cosme Tura, Francesco Cossa and portrait painter Baldassarre D'Este (who was hired by Duke Borso to repaint the faces) painted allegorical figures, triumphal carts and astrological decans in tribute to the Duke. Borso used the Schifanioa Palace as a private residence and a hunting lodge. Borso throughout his long reign was vying for the blessed favor of being appointed the ducal crown by the Pope and exemption from paying tribute to Rome.

I had bought a few out-of-print art history books of the Schifanioa frescoes ever since I had begun a personal study of tarocchi verses and epic poetry of Matteo Maria Boiardo. His writing is said to have been influenced by the art of the time. He had access to the Duke's private library. The frescoes would have been quite often in sight during Boiardo's close association with the Estensi family. The frescoes are a vibrant surviving example of art that is rich with astrology, triumphs and allegory.

Now to the deck...what do I like about it? Aside from the associated history?

The restoration done using watercolors related to the 16 majors and the aged Schifanioa frescoes in comparison has a softer look, with fresh colors. The cards to me are more romantic and appealing. A modern deck based on old designs, suitable for play.

People have told me they enjoyed the Animal Lords for their delight with similar themes in stories from Beatrix Potter. They enjoy the funny associations of the Bosch and Bruegal or the colorful artistry of the Vikings. I've longed for an affordable tarot that reflected my passion for Italianate art and poetry of the late Medieval to early Renaissance period. I also happened to delight on Ferrarese bits and pieces, so this deck is a personal 'theme' favorite. Plus, it's gilded in a beautiful, delicate way that shows the soft watercolors to their advantage.

Already I've looked at more poetry and art of Ferrara, delved deeper into such subjects with more pleasure. For instance, I see the six of swords, traditionally a journey across water or a crossing, as defined in a Rider Waite Smith deck. This is given the meaning "Dangerous but necessary choice." This Continental style traditional meaning from Lo Scarabeo has added depth. From my art resources, I see the Six of Swords detail from the fresco is the Ferrarese interpretation of Persphone being transported by Hades to the Underworld.

There's more romantic notes, from the celebrating couples of the Lovers to the kissing couple in the page of cups to the golden-haired page of swords with his raised swords and white charger.

However there is also reflective pauses and pathos in this deck. The nine of cups is Pomona, an old-fashioned fertility goddess half-covered in leaves. The two of wands is the unclothed, dying Atys, punished for his unfaithfulness, from the fresco in the upper band of July. Most of these allegories are romantic stories, a strong theme in the poetry and art that I like from Ferrara.

In terms of divination, the deck booklet does talk of using a horoscope spread. Berti suggests that the Schifanioa frescoes had astrological significances to Borso. The D'Estensi are noted in history for astrological superstition, so this would be appropriate. However since I am still studying these personages and settings, I cannot suggest anything to modern astrology students.

Let me instead close with thanks to interested readers and seekers of this pretty deck of what I believe is the strength of these 78 pictures:

"Love rained on earth from all the spheres, and gladdened gentle souls, breathing sweet fire in every part; and daring youths and manly hearts, without any wrath and without any war; were seen everywhere donning arms; and the ladies in festivities, in gladness, in sport, in winsome dances, in sweet songs; everywhere happy loves, gallant folk, jocund merrymaking. This goodly city will be no more, methinks and never was before so flowering with honor, beauty and deck round with such delight..."


Golden Tarot of the Renaissance Review by Solandia

The Golden Tarot of the Renaissance is based upon a historically important Tarot, an incomplete deck of hand-painted Tarot cards which are now held in the Bibliotheque Nationale de Paris. The cards were incorrectly known as the Charles VI or Gringonneur Tarot for some time, but are now known as the Estensi deck, as research points to the cards' creation in Ferrara in northern Italy around 1470.

Only seventeen cards remain of the original deck. Sixteen of these are trumps - all familiar to us today though missing the High Priestess, Empress, Wheel, Devil or Star equivalents - plus a Knave of Swords. Tarot scholars and students were left to only imagine what the rest of the cards may have looked like – until Giordano Berti and Jo Dworkin worked together to complete it and create the entire 78-card Golden Tarot of the Renaissance.

As so few original cards remained, inspiration had to be taken from elsewhere for the vast majority of the cards. The booklet mentions examples of trump cards from Ferrara could be found relatively easily, but a lack of historical examples for the numbered cards, meant the original Knave of Swords was discarded and other primary sources used instead. An important source were the frescos in Palazzo Schifanoia, which were created to be a talisman for Duke Borso and around the same time as the Estensi cards.

The finished product, the Golden Tarot of the Renaissance, is Italian in symbology, ordering and meanings. It is a lovely combination of historical imagery and attractive presentation, with the watercolour tarot images coloured in strong primary coloured washes, populated with pale-faced people, and finally backgrounded in patterned metallic gold for a lush and luxurious decorated effect. The borders are a camel/beige colour, which don't distract from the central image, while the backs are reversible (but disappointingly have a somewhat unattractive brown design that don’t match the fresh colours of the cards).

I don’t have a comprehensive knowledge of art history, Renaissance paintings or medieval Italian frescos, but I do have an interest in historical Tarot and found it fascinating to compare the imagery in the Golden Tarot of the Renaissance to more modern decks. For example, there is no cliff or dog in the Fool, who instead has donkey ears and no pants. The Magician is not a magician but instead a Bateleur, standing (performing?) behind a temporary table. There is no lion in Strength, only a woman. The Lovers features not one but three couples. The Hermit has an hourglass, not a lantern. The Hanged Man holds two pouches and dangles upside down, looking more like a captured thief than anyone contemplating enlightenment. The Tower crumbles with no people in sight. The Moon has no scorpion, towers, dog or wolf, but two people appearing to make astrological calculations.

The numbered cards are fully illustrated - there are no pip cards here – but the imagery won't be quite familiar to anyone used to Marseilles or Rider-Waite-Smith decks exclusively. The Queen of Cups has a man chained loosely to her foot. The Knight of Pentacles seems to be studying (or ransacking) a dead body. The Two of Wands shows the graphic aftermath of a castration. The Eight of Swords shows an execution. The Two of Cups shows a couple sitting close together - and he appears to be trying hard to get into her pants, after plying her with wine. The companion booklet, while offering only a few keyword meanings, is adequate to interpret the cards.

I enjoyed the Golden Tarot of the Renaissance deck for its window into the early past of Tarot. While the majority of the deck is indeed a reconstruction, the art is authentic for its time and has been carefully researched to seamlessly integrate with the original cards. This is a unique and elegant historical Tarot.


Complete Details of Golden Tarot of the Renaissance


Similar Decks to Golden Tarot of the Renaissance