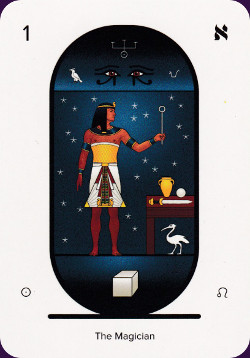 The Eternal Tarot is an elegant and esoteric deck of 78 cards based around Gnosticism and Ancient Egypt. The cards are numbered 1 - 78 and have illustrations in a modernised style of classic Egyptian art, with each scene contained inside a cartouche.


Card Images from the Eternal Tarot 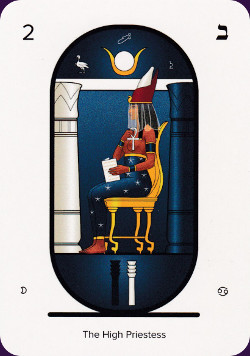 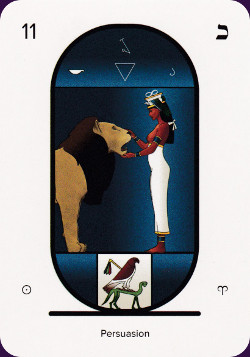 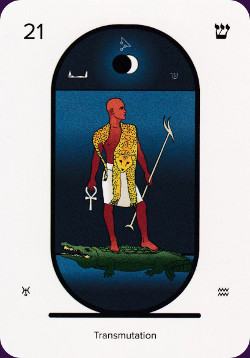 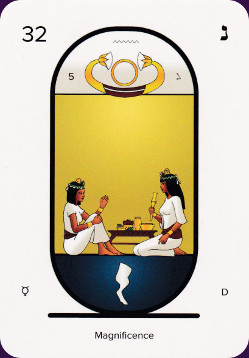 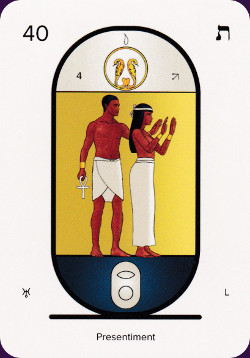 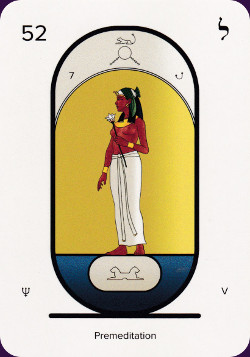 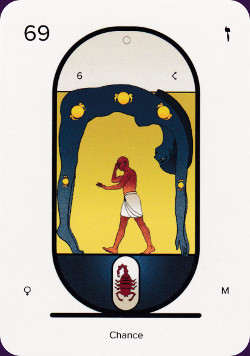 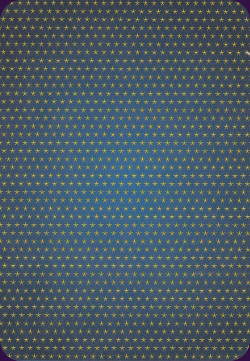 This is a Gnostic tarot deck and as such is founded on some quite uncompromising beliefs. To whit – thousands of years ago the Angel Metatron gave the Tarot and Hebrew letters to mankind. The deeper meanings of the tarot (the keys to higher understanding) have been hidden from common folk, and the tarot decks that have been published over the centuries are both inauthentic and degenerate. But now a new era has arrived and the hidden knowledge and authentic tarot is revealed.

The purpose of this tarot is solely for gaining self-knowledge and spiritual revelation. In line with this, reading tarot for others should only be done by a 'awakened master 'and reading the tarot for the purpose of fortune telling or for earning a living is both ridiculed and repudiated. While this is an exceptionally truncated version, it is essentially the essence of the introduction to The Eternal Tarot.

There are several short chapters in the guidebook which further expands the Gnostic point of view, which is rather absolute and unbending, and may not fit in with those inclined to more liberal new-age beliefs and philosophies. However this is a meticulously constructed tarot deck founded on solid principles and abounding with esoteric knowledge.

The deck itself has 78 cards numbered 1-78. There are 22 Major Arcana, distinguished by the Indigo backdrop to the illustrations. The Minor Arcana are numbered 23 – 78, there are no suits and no Court cards. The ‘Minor Arcana’ cards are signified by the sandy-golden background colour. The layout of each card is identical – the main illustration is contained inside an Egyptian royal cartouche, and surrounded by other relevant information.The cards all have titles and but for The Magician, The Priestess, The Empress, The Emperor, Justice, The Hermit, and Temperance each and every card has a title which is quite unrelated to popularly accepted card designations.

There is no Fool card in The Eternal Tarot, but card numbered 22 is included, titled The Return. Each card illustration is divided into three segments – the upper segment is a hieroglyphic or numerological designation, a sigil or glyph, and a Hebrew letter. The middle, and the largest segment, contains the body of the illustration; the bottom segment contains a planetary symbol, the card’s title, and a zodiac symbol, or, a letter which denotes Modulating Attributes.

The cards measure 70 x 100 mm – which is a fairly standard size for a tarot deck. The card stock is smooth, sturdy, and fairly flexible. The finish is quite glossy, and the cards are very easy to handle and shuffle. The print quality is excellent – clean, clear, and crisp, with strong lines and elegant colours. The colours are based on the ancient Egyptian palette, which was in turn created out of pigments available at the time – white, black, Indigo, deep green, red, brown, tan, yellow.

The style is very much a modern interpretation of classic Ancient Egyptian art – torsos turned to the front, faces largely shown in profile (although some faces are shown in 3/4 view, contrary to true Egyptian style). Each image is set on a plain white background which also forms a broad border to the card. The print on the back of the cards - a myriad of tiny yellow stars on an Indigo background - is fully reversible.

The cards and guidebook come packaged in a lightweight cardboard box with a tuck-shut lid. The box is sufficiently sturdy to transport cards - if treated carefully, if not it will quickly become battered and torn.

The guidebook is 98 pages, quite small, but serves as a good introduction to the cards. There is some lengthy exposition on Gnostic beliefs surrounding the tarot – its origins, purpose, science, and sacredness. Further chapters cover "The Art and Religion of the Tarot" as well as "The Symbols of the Tarot". A ritual for reading the cards is included. The bulk of the guidebook is given over to "Interpreting the Arcana”. An explanation of the card is given, as well as a Transcendental Axiom (Major Arcana only), Modulating Element (Minor Arcana only), Timetable (Major Arcana numbers 10- 22), and Forecasting Element (all cards).

This is a beautiful, elegant tarot, steeped in Gnostic wisdom. If you are seeking a Gnostic tarot then this deck is perfect; if you are looking for an Egyptian-art based deck you can simply eschew much of the Gnosticism and still reap the rewards of using this deck. A powerful tarot full of esoteric knowledge; highly recommended.