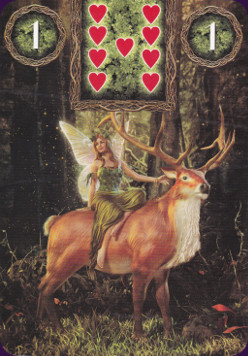 The Fairy Lenormand Oracle is a large-size, 36-card Lenormand deck with a fantasy fairy theme. The cards have sleek, detailed illustrations of pretty fairies in a storybook world. 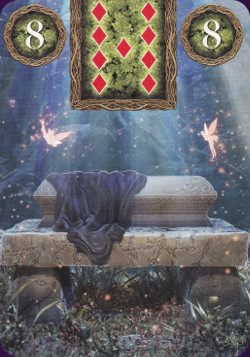 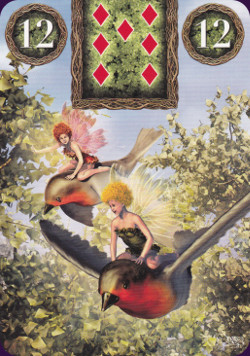 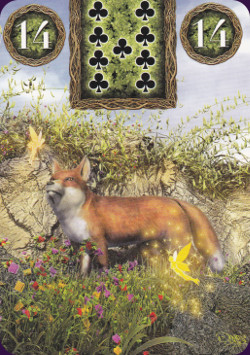 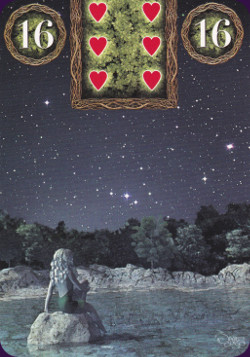 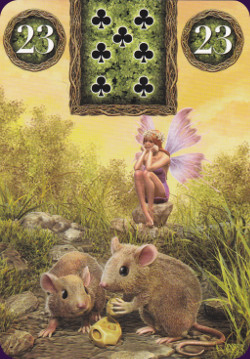 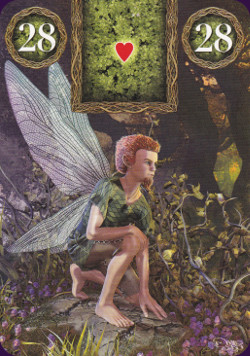 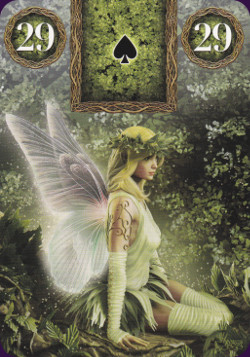 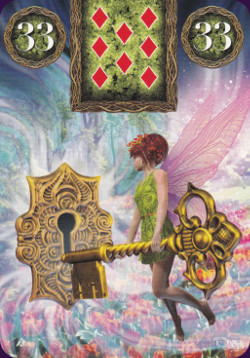 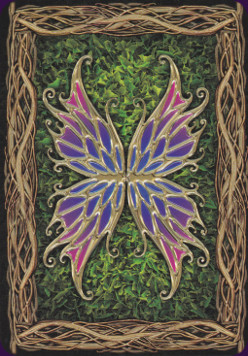 In spite of its title ‘Fairy Lenormand Oracle’, this is less an oracle and more a Lenormand deck. The artist David Corsi has created a conventional Lenormand deck with the romantic theme of faeries. These are very much your traditional fairies – sweet creatures with big wings, in pretty clothes, who spend their days at play in picture book natural settings. Here we see fairy folk (with rather Scottish-looking backgrounds) going about their daily lives riding birds, deer, snakes, boats, fish, or hanging about flowers, bears, storks, dogs… It looks like a charmed life they lead!

This is a standard Lenormand deck in that it has 36 cards, with no trappings of tarot such as Major and Minor Arcana. Recent trends have Lenormand decks expanded with extra Male and Female cards as well as variations on Tree, Snake, and Child cards, but the Fairy Lenormand has opted to remain simple and relatively straight forward.

The cards do not have titles, only numbers and a playing card association. For novice Lenormand readers there are a few cards that are a little confusing – the Clouds card is dominated by a large mountain, the Heart card has a pair of fairy lovers sitting on a rather barren bush, their legs bisecting an ugly tangle of branches to form an approximate heart shape; and the Anchor is a little lost, being as it is in the clutches of a troll (?), with a dancing fairy partially obscuring it.

The cards measure 88 x 125 mm which is very large for a Lenormand deck, almost twice the size of the Under the Roses Lenormand and Celtic Lenormand decks. The card stock is good – thin, flexible, with smooth low sheen backs and lightly textured, slightly toothy faces. Textured cards are almost always easy to shuffle and the FLO is no exception – the cards are very manageable. The artwork has a naturalistic palette with an emphasis on country colours – forest greens, twilight blues, earthy browns, with flashes of amethyst, scarlet, lilac, orange, and magenta.

The imagery is digitally created and for the most part is quite realistic. Sometimes that surreal smoothness so typical of digitally created artwork creeps in; but the images are so detailed that it largely goes unnoticed. The pictures extend to the edges of the cards, the only borders are the frames around the card number, and playing card correlation. The image on the back of the card, a stylised butterfly on a background of grass, within a woven-wood frame – is reversible. As Lenormand cards have no reversed meanings, the importance of this is purely the personal preference of the reader. The cards and guidebook come packaged in a solid cardboard box with liftoff lid. The box is glossy and printed with images from the deck as well as information about the cards, in 5 languages.

The 128 page guidebook has instructions in English (takes up 70 pages of the instructions), Spanish, Italian, French, and German. In a very short space this guidebook certainly packs in a large amount of information. The Introduction incorporates a short history of Lenormand cards; the fundamentals of doing a reading; understanding the language of Lenormand cards and how it defines a reading. There is a list of the most commonly accepted divinatory meanings, along with some alternate interpretations. There is information about placement of cards in a reading; cards that are similar; directional cards and how to interpret their influence on surrounding cards. This is followed by instruction on how to read Lenormand cards, which includes the all important phrasing of a question. A 9-card spread is included along with the Master Method, the Grand Tableau, and Fairy Houses – layouts that use all 36 cards in a single reading.

This is a lovely Lenormand deck if you like your images busy, full of detail and energy. If you are looking for something more restful and simple this is not the deck for you. The images are pretty and have a storybook quality to them, this is not the Fae with their mysterious and oft-times foreboding power. Ultimately, they are perfectly functional Lenormand cards that will work for any dedicated user- and isn’t that just what you’re looking for?